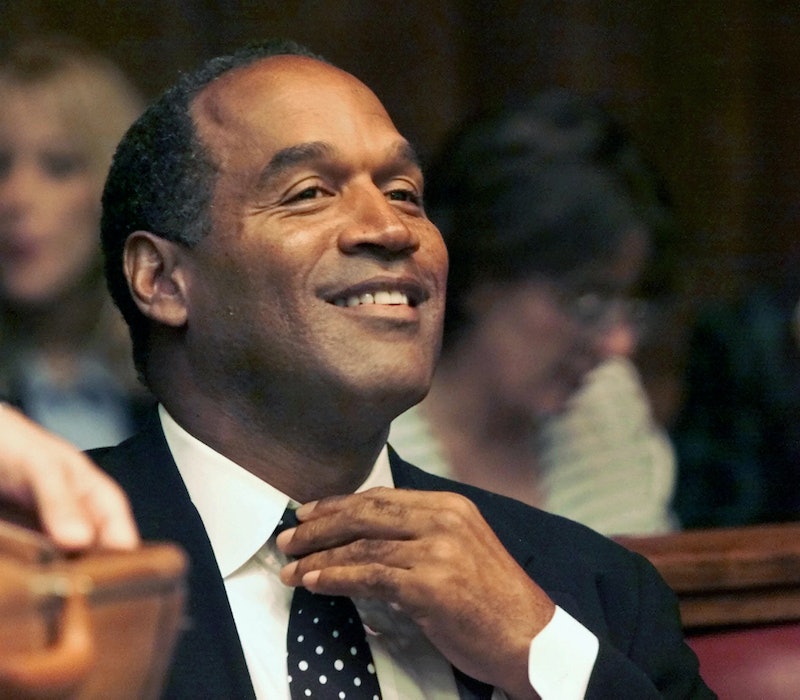 Unless you've been living under a rock for your entire life, then you already know how Tuesday's season finale of American Crime Story: The People V. O.J. Simpson is going to end: Simpson was acquitted of all murder charges In 1995. So that's that, right? Under this country's double jeopardy laws, no one can be tried for the same crime twice; so even if new evidence was found, Simpson could never again stand trial for the murders after he'd already been found not guilty. But, he did participate in a civil suit brought by the Goldman family, and Simpson was found liable for the deaths of Nicole Brown Simpson and Ron Goldman. But, is Simpson being found liable the same as being found guilty? In a word, no.

In January of 1997, a little over a year after the Oct. 3, 1995 verdict in the criminal case, the Goldman family brought a wrongful death suit against Simpson in civil court. There are a lot of differences between civil and criminal courts, but perhaps the main difference is the result: If found guilty, a defendant in criminal court typically goes to jail, while a defendant in civil court typically has to pay a cash award to the plaintiff. In this case, the family was seeking monetary relief from Simpson if the jury found him personally "liable" for the deaths of Nicole and Goldman — the only recourse the Goldman family had left after criminal court.

In his second trial, Simpson wasn't represented by any of the members of his iconic Dream Team, but by civil litigator Robert C. Baker, according to the Los Angeles Times. The absence of Robert Shapiro and Johnnie Cochran wasn't the only difference in this new case. Detective Mark Fuhrman, a controversial figure in the original trial, was not called as a witness, the LAT reported; and CNN reported that Simpson was subpoenaed to take the stand in his own defense. (He had previously declined to testify in his first trial.)

One month later, in February of 1997, the jury in the civil case found Simpson personally liable for the wrongful deaths of Ron Goldman and Nicole after deliberating for five days, according to Vanity Fair. (Conversely, CNN reported that the jury in Simpson's criminal case deliberated for less than four hours after a case that lasted 11 months.) Simpson was ordered to pay a total of $33.5 million to the families of his two victims, according to the New York Times.

How can one man be found "not guilty" in criminal court, but "liable" in civil court? Aren't those verdicts contradictory? Not necessarily — and that's where the second major difference between the two types of trials comes in. According to The Wall Street Journal, in a criminal trial, the jury must unanimously find the defendant guilty "beyond a reasonable doubt" in order to convict. However, the same burden of proof does not exist in civil cases, which merely require what's referred to as a "preponderance of evidence." According to Cornell University Law School, that "preponderance of evidence" means that at least "50 percent of the evidence points to something," rather than requiring a unanimous decision.

Furthermore, the specific charge of alleged first degree murder that was brought against Simpson in criminal court required proof of being "deliberate and premeditated" according to the definition in The Law Dictionary. On the other hand, according to law book publishing company Nolo, the charge of wrongful death brought in civil court only requires proof that "[the defendant's] intentional and unlawful conduct resulted in the victims' deaths."

Without the distraction of Mark Fuhrman's testimony in the civil trial, the jury was able to focus solely on Simpson and his alleged unlawful conduct. One piece of evidence used in the civil trial that was not used in the criminal trial were the alleged killer's shoes. According to ABC News, "a men’s size 12 Bruno Magli brand shoe print stamped in the victims’ blood" was discovered at the crime scene. According to that same ABC News story, in the court deposition tapes Simpson declined having owned any such shoes. "I would have never worn those ugly a** shoes,” Simpson said in his deposition. Yet, according to ABC News, by the time the civil trial began, "30 more photographs of Simpson wearing the same Bruno Magli shoes were entered into evidence."

In addition to the shoe evidence, the deposition tapes revealed Simpson's testimony with Attorney Daniel Petrocelli where Simpson admitted to abusing Nicole.

Petrocelli: Did you physically hurt her?

Petrocelli: Did you ever bruise her?

Petrocelli: Did you ever make her black and blue?

Simpson may not have served a prison sentence for Ron Goldman and Nicole's deaths — but the civil trial determined that, legally speaking, he is in fact liable for their deaths.