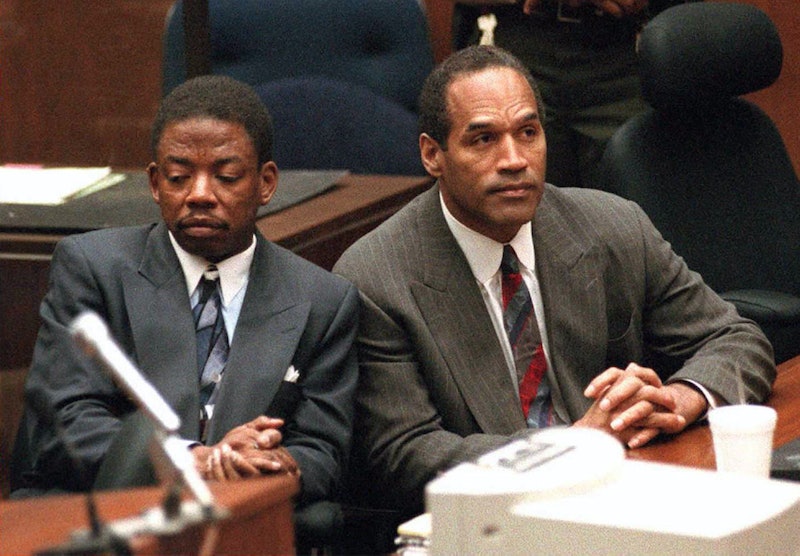 FX's American Crime Story finale will feature the O.J. Simpson murder trial's closing arguments and its verdict, in which Simpson was found not guilty for the charges of Nicole Brown Simpson and Ron Goldman's murders. (O.J. Simpson was found liable in the resulting civil trial and ordered to pay the victims' families $33.5 million.) But, before the verdict, the defense attorneys and the prosecution presented their closing statements, reminding the jury of their respective positions. Before the closing arguments began, Simpson was required to state that he was waiving his right to testify as a witness in the trial. However, the former football star did more than just make that statement — Simpson made a whole emotional speech, even seemingly crying, as seen in the courtroom footage.

According to the video, the jury was not in the room during Simpson's speech, but Prosecutor Marcia Clark was still vehemently against him speaking. Still, Judge Lance Ito approved it. Simpson kept his remarks on the topic of the waiver, rather than commenting on the content of the trial itself. "As much as I would like to address some of the misrepresentation made about myself, Nicole, and our life together, I am mindful of the mood and the stamina of this jury," he said in court, as seen at 1:10 in the video below.

I have confidence, a lot more than it seems Miss Clark has, of their integrity that they will find as the record stands now that I did not, could not and would not have committed this crime ... I have four kids — two kids I haven't seen in a year. They asked me every week, "Dad, how much longer?" I want this trial over.

It may not be apparent from watching the video of Simpson's remarks on first glance, but reports of the speech claim he did tear up and was choked up. Defense attorney Johnnie Cochran told the press afterward, "At the moment he stood up, he was very emotional. You think he prepared the fact that when he started talking about his children, he'd become tearful? Or that his daughter would breakdown and start crying? That was spontaneous."

And, according to New York Times reporter David Margolick, Simpson "spoke unhaltingly, except for what seemed like some calculated chosen commas. As he talked, his eyes watered and he choked up."

In a dazzling display of showmanship and chutzpah, a carefully rehearsed O.J. Simpson rose to his feet to waive his right to testify and then electrified the courtroom with an unprecedented speech ... It was hard to know where to look in the shocked courtroom. Judge Ito, who would have cut off any other defendant in mid-sentence, merely stared, knowing he had been outfoxed. Marcia Clark fumed. To my left, Simpson’s daughter Arnelle sobbed.

It had been long speculated about whether or not Simpson would testify in the trial, but Harvard law professor Charles J. Ogletree told the Los Angeles Times that even though Simpson never made it to the stand under oath, his silent reactions from the bench were watched closely by people. "In a sense, Simpson has been testifying every day," the law professor claimed. "His mannerisms, his gestures, his emotional reactions to some of the physical evidence and the testimony are factors that this jury will weigh in determining whether he's been guilty beyond a reasonable doubt."

And, though the jury didn't hear his emotional speech to the court, it remains a large piece of the trial as a whole, as it's one of the only instances where Simpson took the chance to speak on his own behalf.