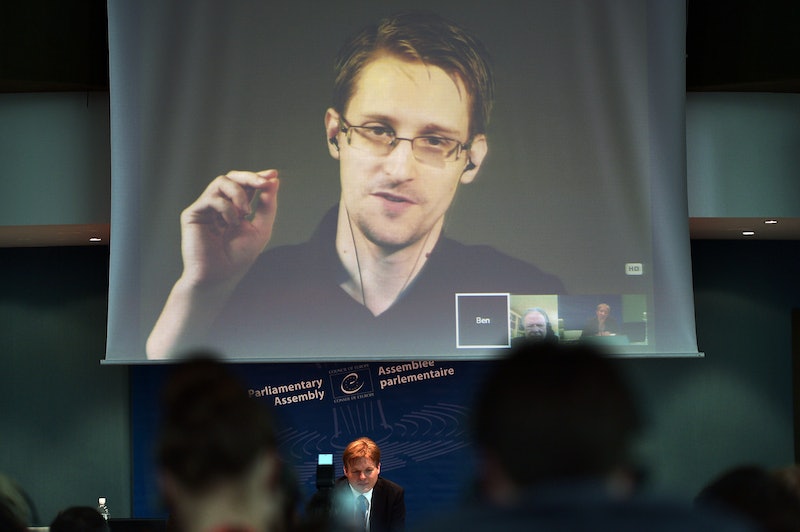 Edward Snowden, of "leaked NSA documents" fame, has been tweeting up a storm since the Panama Papers were released Sunday. He posted about the leaked documents from Mossack Fonseca, a Panamanian law firm that has allegedly spent the last 40 years helping its clients — including many prominent politicians and their associates — launder money, avoid sanctions, and lower their tax bills. He's retweeted with abandon and even declared that "Courage is contagious." He's clearly proud of his fellow leaker, whoever they may be. So it's curious, then, that Snowden ignored one key figure from the Panama Papers: Vladimir Putin.

His first tweet on the matter was covered in U.S. media: "Biggest leak in the history of data journalism just went live, and it's about corruption." So why ignore one of the biggest stories on the corruption that was revealed? The Guardian reports that a $2 billion trail of offshore accounts leads to close friends of the Russian president. And yet Snowden's Tweets have largely focused on Iceland and its embattled prime minister Sigmundur Davíð Gunnlaugsson, which has led at least one German journalist to call him out. The answer is very simple: The only person keeping Snowden out of a U.S. jail cell is Putin himself.

When Snowden fled from the U.S. to avoid arrest in 2013, he planned to seek asylum in Ecuador, like Wikileaks founder Julian Assange (who remains in the Ecuadorian embassy in London). He flew from Hong Kong to Russia and planned to carry on his journey, perhaps through Cuba and Venezuela, to Ecuador. That didn't work out, though, because the United States canceled his passport and put pressure on Ecuador not to issue him travel documents. After several days stuck in the transit zone of Moscow's airport, he ended up entering Russia to seek asylum.

His time in Russia is thanks to Putin, who let him stay if he promised to stop divulging NSA secrets. After his one-year asylum ran out, Russia issued him a three-year residency permit. While not officially part of the deal, Snowden has kept his criticism of Russia to a minimum, and personally criticizing Putin would be a bad move. The closest he ever came was in 2014, when he asked Putin on Russian TV if Russia spies on its citizens in ways similar to the NSA. Putin denied it, of course.

On Twitter, Snowden has never tweeted the words "Vladimir," "Putin," "Russia," or "Kremlin" — despite living in the country. There are two tweets that mention "Moscow," but they have nothing to do with his thoughts on Russian society; they're in reference to Snowden's own future in the city.

The official Kremlin reaction to the Panama Papers is to dismiss the revelations. It's all "Putinphobia," according to Dmitry Peskov, Putin’s spokesman — nothing but an attack from the West (interestingly, Peskov is also mentioned in the papers). There is one Russian newspaper looking into the allegations, but nothing has aired on Russian state TV. The freedom of information that Snowden champions, the open and honest government, seems to be lacking. As long as he's in Russia, you have to cut Snowden some slack. But it's also important to understand why "Putin" will not be a trending topic for him any time soon.