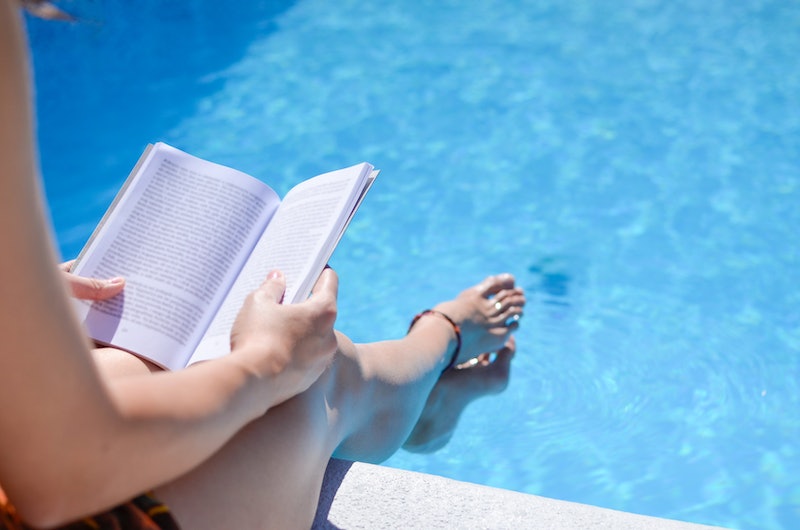 Young adult authors have blessed us lit nerds with a book feast this month, so I hope you have a lot of free time. Even 18 of the best YA books of May 2016 was a near impossible feat because I could have easily added 18 (or 28) more and been satisfied that they were all awesome enough to be included. Grab you're calendar because there are a lot of dates you're going to want to put hearts around.

Both Kiera Cass and Rick Yancey are finishing their beloved series this month, which is a blessing because we finally get to see how everything ends, but it's also a curse because ... what? There won't be any more to read? Just trust me and keep your tissue supply stocked and on hand. They aren't the only ones continuing high-profile series in May either. Three little words: Sarah J. Maas. Do I have to say anything else?

Meanwhile, other YA authors are looking to get into the series game by dropping book one. There's a Russian-style magical fantasy and a female friendship-centered mystery series coming, and you don't want to fall behind. Oh, and it's taken me this long to even mention that Where Things Comes Back's John Corey Whaley and The Silver Linings Playbook's Matthew Quick are both releasing new YA books this month. That's how stacked May is. What that doesn't mean, however, is that newbie and lesser-known authors are being overshadowed because they are coming into May ready to play.

These 18 YA books are going to kick off summer season (aka peak reading season) right.

1. A Court of Mist and Fury by Sarah J. Maas (May 3; Bloomsbury USA Children's)

Sarah J. Maas needs no introduction, and you probably already have the second book of her A Court of Thorns and Roses series, A Court of Mist and Fury, on your calendar. So you need no help from me on this one, but just know that her fae-Beauty and the Beast mashup is just as darkly sexy and thrilling as you have hoped and expected from your queen of YA fantasy.

2. If I Was Your Girl by Meredith Russo (May 3; Flatiron Books)

A trans young woman named Amanda starts a new school in Tennessee after she was attacked in her old town. She's determined to keep to herself and not let anyone close enough to hurt her, but when she meets Grant, her plans go out the window. Meredith Russo creates a tale about a trans girl that isn't centered around just that fact. It's a love story that talks about the secrets everyone has and all of the qualities that might make us different or add obstacles in the face of a loving relationship.

3. The Unexpected Everything by Morgan Matson (May 3; Simon & Schuster Books for Young Readers)

Morgan Matson has the incredible ability to capture the spirit of summer within the pages of her vastly different stories. This year, in The Unexpected Everything, readers meet Andie Walker a type-A daughter of a Connecticut congressman who spends most of his time in D.C. A political scandal rocks her family, and forces all of Andie's carefully laid summer plans to break down. Now she's stuck walking a billion dogs and, just maybe, finding that real life is what happens outside of your plans.

4. Ask Me How I Got Here by Christine Heppermann (May 3; Greenwillow Books)

Addie is in a safe, happy relationship with her boyfriend, and while they're usually careful, she ends up pregnant. When she decides to get an abortion, she knows it's the right decision for her, but she doesn't want anyone else in her life (even her boyfriend) to know. Addie unexpectedly finds peace in a new relationship with a fellow graduate from her religious school named Juliana. This story in verse manages to be sex-positive and feminist, showing that while abortion can be a big decision, it doesn't have to be as horrific and life-changing as some media would make young girls believe.

It's the end of the journey! Kiera Cass' Selection series comes to an end this month with The Crown, following America's daughter Princess Eadlyn as she endures her own selection process of finding a husband. Can she find true love like her father did in his own? Just bring your tissues and your cheers and find out.

6. The Outliers by Kimberly McCreight (May 3; HarperCollins)

Crippling anxiety has kept Wylie at home in the months following her mother's death. But she's forced into the light of day when her best friend Cassie sends an enigmatic but worrying text, "Please Wylie, I need your help." Wylie and Cassie's boyfriend Jasper follow Cassie's clues to an abandoned summer camp in the dark woods of Maine, where she is being held by a mysterious group. Secrets, betrayal, and danger lurk on every page of this book, and you'll be tearing through it to learn all it has to say.

Ambitious student Lisa hopes to get into an undergrad psychology program by writing about agoraphobic 16-year-old Solomon, whose anxiety has kept him at home since seventh grade. But Lisa and Clark bond with Solomon and the three teenagers form a friendship that helps them all open up and drop their protective exteriors. In true Whaley fashion, the story is hilarious and warm and poignant, all at the same time.

8. Everland by Wendy Spinale (May 10; Scholastic)

Forget Neverland, because you're about to visit Everland. London has been destroyed by bombs and disease, and the only survivors are children. German Captain Hans Otto Oswald Kretschmer (spell that out, HOOK) aims to find a cure for the disease, and so he snatches up children for experimentation, believing they have immunity. Gwen, Joanna, and Mikey Darling are struggling to survive already, so the family is devastated when Joanna is taken by Captain Hook. Gwen finds help in the mysterious Pete and his Lost Boys (plus Bella), and they work together to outsmart the evil captain.

A YA heist novel? Yes please. Drea's true self hides behind a perfect facade: She's the class valedictorian at an exclusive school, she's wealthy, and she was voted Most Likely to Do Everything Right. But when her secretly criminal parents disappear, Drea starts to break all the rules, and she is required to tutor juvenile delinquents and show them the way to stay out of trouble. Except, instead, those kids show Drea a thing or two about crime and they form an unlikely bond to stop a common enemy.

10. Even If the Sky Falls by Mia Garcia (May 10; Katherine Tegan Books)

New Orleans comes alive in Mia Garcia's romantic Even If the Sky Falls. Julia heads to the city to volunteer re-building homes with her church group, but she skips out when the become overbearing and heads to celebrate at Mardi Gras instead. It's there she meets musician Marcus, and the two decide to spend one romantic evening together, strolling the streets. Except one thing: They won't share their real names. If you love Before Sunrise and other day-in-the-life love stories, you'll fall head over heels.

11. Places No One Knows by Brenna Yovanoff (May 17; Delacorte Press)

In this love story, a teenage girl meets the man of her dreams — and I mean that literally. Imagine if Inception were a romance, and you'll see just a little of what you're in for in Places No One Knows. Waverly Camdenmar has a seemingly perfect existence as the rich, popular, straight-A student, but she's unhappy and spends her nights running because she can't sleep. Except this one night, when Waverly falls asleep and dreams herself into burnout Marshall Holt's life. Only Marshall can see Waverly, and they begin meeting over and over again in Waverly's dreams, forming a relationship based in unflinching honesty, nothing they could admit in the light of day.

Like a fairy tale hero Vika Andreyeva can make it snow and turn ash into gold. Nikolai Karimov is a fellow enchanter, bestowed with the power of seeing through walls and conjuring bridges. But in this alternate Russian reality, Vika and Nikolai are the only two enchanters left in the country, and the tsar needs to find the best one to have by his side in this dangerous world. So the tsar begins the Crown's Game, a magical duel to the death. The only problem? The opponents are falling in love.

Summer Days and Summer Nights short story collection celebrates summer love, and with the incredible writers I'm about to list off, it's clear you can't miss it: Leigh Bardugo, Stephanie Perkins, Libba Bray, and Veronica Roth are just for starters. This is going to be your perfect beach-going companion if you're looking for intelligent fun.

14. Devil and the Bluebird by Jennifer Mason-Black (May 17; Amulet Books)

Teenage musician Blue Riley and her older sister Cass make a pact to always speak on their late mother's birthday, so when Cass continues to miss the call, Blue makes a deal with the devil (literally) to find her sister. In exchange for Blue's stunning voice, the devil will give her one shot at finding Cass. This musical, moody, magical realism tale will captivate you as you follow Blue along her journey, uncovering secrets about her family and learning more about her own sexuality, voice, and identity.

Stacey Lee will transport you to San Francisco 1906, the time of the infamous and tragic earthquake that rocked the city. Fifteen-year-old Mercy Wong uses her cunning (and maybe a little bribery) to use the best chance she has to escape poverty in Chinatown and enroll in the elite St. Clare’s School for Girls. But when the earthquake hits, it's Mercy, not the wealthy heiress peers who takes charge and fights for her safety in the city in chaos.

When her friend Hannah comes out as gay, Daisy is determined to be the most loyal ally she can — but she gets carried away in her support. She goes straight to the school administration demanding same-sex couples are allowed at school dances, hijacks her school's LGBTQIA support group, and organizes an "alternative" school dance that garners media attention. Daisy's actions shove some of her peers out of the closest, and she quickly becomes overwhelmed with changing an antiquated world. Jenn Marie Thorne freshly spins a story about when being a good-hearted ally can go awry.

18. Every Exquisite Thing by Matthew Quick (May 31; Little, Brown Books for Young Readers)

We all fell for Matthew Quick with his novels The Silver Linings Playbook, Forgive Me, Leonard Peacock, and others, so any new release from Quick is an event. And Every Exquisite Thing lives up to the hype. Just like we readers, Nanette O'Hare is life-changing inspired by a book she has read. Cult-classic The Bugglegum Reaper awakens the rebel spirit living deep inside the dutiful daughter, and she begins to check her privilege, falls in love with a young poet, and even befriends the author. You're going to wish you could follow Quick's awesome heroine Nanette for another 500 pages or so when you get to the end.