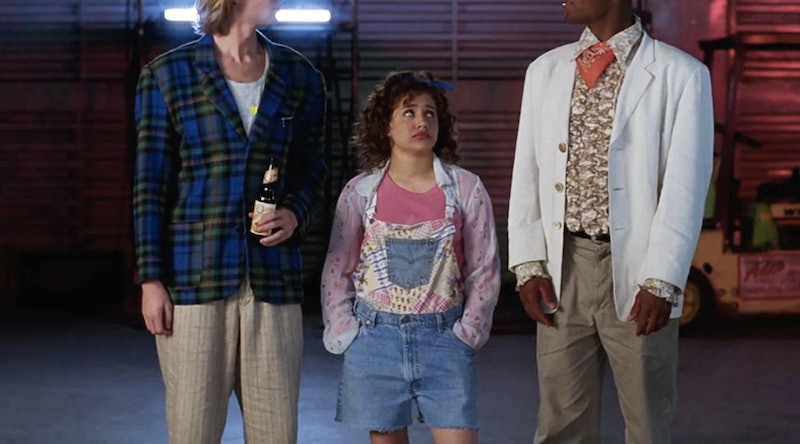 It is without question that Cher Horowitz is the most iconic heroine of ‘90s teen movies, and, without her, pop culture wouldn’t be the same, but nobody gives any credit to Tai Fraiser. Played with an adorable mix of roughness and innocence by the late Brittany Murphy, Tai is a hidden gem in the candy-colored world of Clueless. And as the only one who realistically dresses and acts like, well, a teenager from the ‘90s, it would be interesting to see what would happen if Tai was the main character of Clueless.

I mean, the movie was never going to be written that way because Clueless is a modern translation of Jane Austen’s Emma, but you know. My guestimation is that a Tai-centric Clueless might actually feature, well, a lot of the same cluelessness. The core difference would be that Tai is someone who works her way up into popularity versus Cher, who’s already the school’s golden girl. So Tai would make for a protagonist in more of a Cady Heron or Josie Geller kind of way.

If that’s still hard for you to imagine, don’t worry. I’m putting my fanfiction hat on and deducing how Clueless would go if it were Tai-centric.

1. Tai Is A Bright-Eyed New Student Who Feels Totally Alienated When Her Father Gets A Job Transfer

She's shell-shocked by the fashionistas at Bronson Alcott High, completely confused that the entire "grunge" fad passed over her classmates.

2. Luckily The Most Popular Girls In School Decide To Adopt Her And Show Her The Ropes

They're as kind as they are intimidating, with all their Amazonian prowess. Must be something in the water here.

3. Then The Hottest Guy Ever Decides To Talk To Her

It sounds like a bang-up day, but Cher assures her that he isn't a suitable suitor. But he likes Looney Tunes and skateboarding and weed; it doesn't make sense.

This could actually be left 110 percent in tact, as long as we recognize that Tai is the Anne Hathaway of this situation.

5. Tai Is So Grateful To Cher That She Secretly Decides To Get Cher A Boyfriend

Cher said she didn't have one, so this seems like the perfect way to pay her back.

6. But Then Cher Says Elton Has Designs On Her, And He's All Ritzy And Stuff, So...

It wouldn't hurt to look for love, too, would it?

7. Everything Unravels When It Turns Out Elton Actually Likes Cher

Tai had thought that she was among the popular people now, and, even though she wanted Cher to have a new boyfriend, she didn't want it to be her theoretical new boyfriend. Luckily, Cher rebuffs him out of friendship solidarity and a case of the icks.

8. Tai Remains Discouraged And Despondent About Her Place Among The Popular People, Though

She's still not 110 percent over being rejected by Elton.

9. And She's Still Concerned About What's In The Water Here

Or maybe this is punishment for drinking all that Seattle coffee.

10. She's So Preoccupied She Can't Figure Out How To Tell Cher She's Seeing A Gay Man

Tai is so innocent when it comes to drugs and sex, so she hopes the situation will unravel naturally on its own.

11. Actually, She's Pretty Sure That Cher's Ex-Stepbrother Is Into Her

Tai and he danced together at a party, but it was obvious he was checking up on Cher. The project is back on, but how does Tai matchmake them together?

12. Cher Learns The Truth About Christian And He Saves Tai From Being Murdered By Some Barneys At The Mall

All of a sudden, Tai's stock totally skyrockets, and she becomes the most popular girl at school.

13. Now Even More Indebted To Cher, Tai Tries To Spur Cher To Act On Her Feelings Towards Josh

She decides to visit Cher and pretend she thinks Josh is into her, hoping that Cher's reasonable jealousy will force her to make a move.

14. But Then Cher Implies That Tai Isn't Good Enough For Josh

15. Deeply Hurt, Things Get Out Of Hand And Tai Abandons Her Mission

16. She Realizes She Doesn't Really Care About Being Popular

It's nice and all, but she could find a way to be friends with Cher and still true to herself.

17. Also, She Realizes She's Crazy About The First Person Who Really Appreciated Her Real Self: Travis

Oh my god, she feels so totally clueless.

18. She Decides To Check Out His Skateboarding Showcase And Makes Amends With Both Him And Cher

Everything is right with the world.

19. Sure Enough, Tai's Attempt To Make Cher Jealous Got Cher and Josh Together, While Tai Embarks On A Relationship With Travis

And they lived happily ever after. I would totally watch that movie.