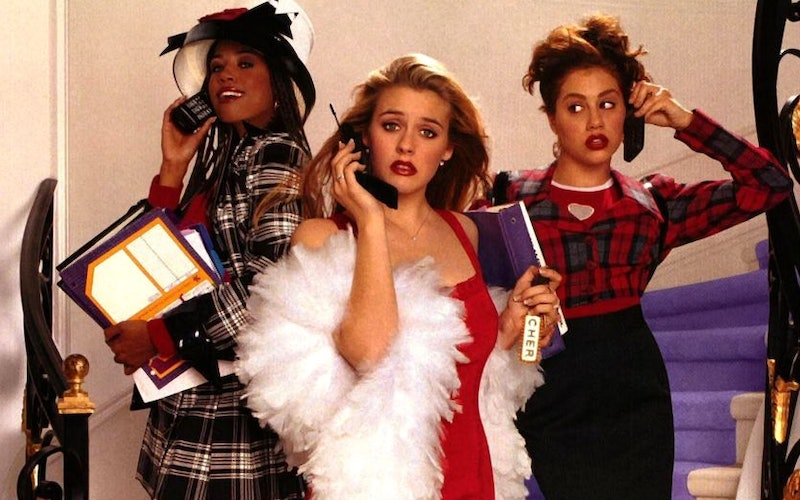 It's hard not to adore Cher Horowitz, the Clueless heroine inspired by Jane Austen's Emma. At first, she follows in Emma's footsteps as the heroine Austen believed only she could love, but Cher is a product of Hollywood, so as Clueless continues towards its peachy conclusion, Cher learns and grows. Part of that learning is figuring out that sometimes the perfect man doesn't conform to you predetermined notions of boyfriend material, but the other side of the learning curve was like, totally for the ladies.

And after paying homage to Hermione Granger, Tina Belcher, and Buffy Summers, it's only fair we give Cher snaps where snaps are due. Because while Cher may have started out as a virgin who can't drive, by the classic '90s movie's end she was well on her way to enlightenment. Here are all the times Cher Horowitz worked her way towards becoming a feminist:

CATCALLS AND UNWANTED TOUCHING? AS IF!

Not only is Cher not having any of this noise, she's willing to show that bro just how unwelcome that attention is by risking looking a little unladylike to get him out her hair. Take heed, ladies.

HOW DARE YOU CALL HER A PRUDE

Okay, so she didn't launch into a diatribe about how the word "prude" is a judgmental word that's just as derogatory as the word "slut," but she was getting there. She's got standards and that's like, totally amazing.

WE CAN LIKE PINK, SPARKLY, FLUFFY THINGS AND STILL HAVE BRAINS

Cher may speak like a typical L.A. teenager and she may like cute, whimsical accessories, but don't let that fool you into thinking this lady's not one smart cookie. It just takes her a few life lessons to get there.

NO MEANS NO, YOU SNOB

Elton may have threatened to leave Cher in the Valley (ugh, I know) if she wouldn't make out with him, but Cher didn't care. She got right out of that car and found her own way home. She doesn't need a man who thinks he owns her. I repeat: As if.

IT'S NEVER OKAY TO LET YOUR FRIEND FEEL LIKE THIS

When Tai was being way harsh on herself after being rejected by Elton, Cher knew it was time to fix things. No friend of hers should define herself worth by a man who's clearly unworthy of her.

DON'T ACCEPT THE SYSTEM AS IT IS

Okay, Cher. Wrong target this time, but you're headed in the right direction. Grades are important, so maybe rethink this one, but there's never a problem with a woman willing to question the status quo.

BE PASSIONATE ABOUT YOUR PROJECTS AND THEY WILL FLOURISH

Again, this time the project was turning Tai into a woman in pursuit of a man unworthy of her adoration, but with the capacity to get this excited over a project, just think of all the good she'll do when she applies her tenacity elsewhere.

DEAR MEN, YOUR OPINION IS OF NO CONCERN TO ME

True, she's talking to her then-annoying step brother at this point, but Cher is fiercely independent and that's the beginning of a beautiful life as a self-sufficient, autonomous lady.

While she's working her way to feminist enlightenment, Cher knows she can still appreciate a great haircut or outfit. Style and feminism aren't mutually exclusive, after all.

More like this
These 'Law & Order: SVU' Throwback Pics Show 23 Years Of Shipping History
By Grace Wehniainen
Shania Twain Replaced Brad Pitt’s Name In “That Don’t Impress Me Much” At The PCAs
By Jake Viswanath
Kim Cattrall Had A 'Sex And The City' Reunion With Creator Darren Star
By Grace Wehniainen
17 Photos Of The 'Wednesday' Cast Vs. The 1991 'Addams Family' Cast
By Grace Wehniainen
Get Even More From Bustle — Sign Up For The Newsletter