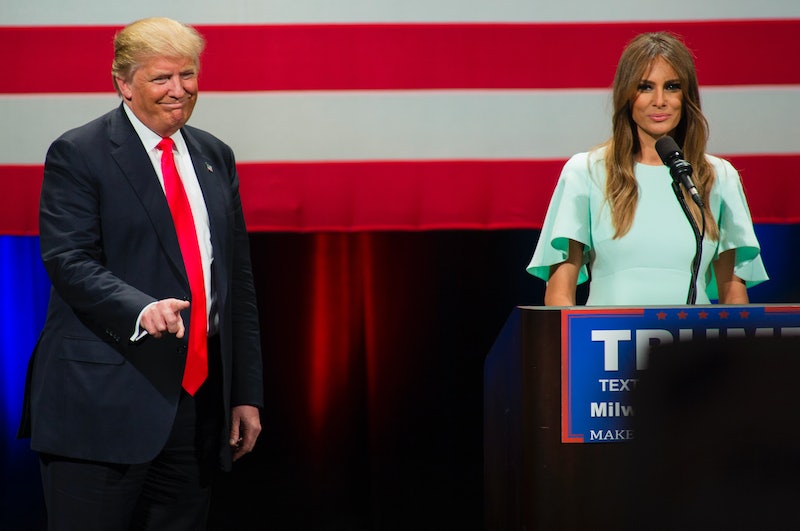 In a rare occurrence Monday, Melania Trump joined her husband on the campaign trail in Wisconsin, giving a speech on his behalf. The Trump campaign clearly hoped that Melania's speech would help Trump appeal to women voters. However, I'd argue that nothing about her appearance or speech at the rally ingratiated her husband to women.

Even as he excitedly introduced Melania to the crowd, Trump displayed his sexism. The businessman-come-politician said of his wife, "She's an incredible woman. She's an incredible mother, she loves her son Barron so much," before adding, "And I have to say, she will make an unbelievable first lady." He referred to his wife only in relation to himself. Essentially, he displayed his two worst traits at once — backwards sexism and blatant narcissism. There's nothing wrong with being a great mom, but Donald could have at least mentioned that Melania is also an accomplished model, and studied architecture before they were married. It is no wonder that The New York Times reported that women unfavorably view Donald Trump by rates of over three to one.

Melania herself could do little to help her husband's cause. Her speech mostly consisted of blanket statements about Donald that undoubtedly did little to win him new supporters. Melania said of her husband, "I’m very proud of him. He is a hard worker, he’s kind, he has a great heart, he’s tough, he’s smart, he’s a great communicator, he’s a great negotiator, he’s telling the truth, he’s a great leader, he’s fair." Without any concrete ways in which she sees her husband embodying any of these characteristics, or fulfilling the roles she listed, the speech lacked persuasive power.

Melania did mention one of her husband's characteristics that almost all viewers must agree with, even if it is not necessarily positive trait: "As you may know by now, when you attack him, he will punch back ten times harder.” This seems like a strange way to attract support, but it has proven to be true — multiple peaceful protesters have allegedly been attacked at Trump events, even if The Donald claims that he does not condone violence.

However, the claim that was meant to be the crux of her speech (and the reason for her appearance) was the least true of all. In an obvious appeal to women voters, Melania said, "No matter who you are, a man or a woman, [Donald Trump] treats everyone equal." Unfortunately, Donald has consistently demonstrated that he does not in fact treat men and women equally, most recently through his introduction to the very speech she was giving. In fact, Trump further undermined his wife's claim by referring to either her or her speech (it was not entirely clear which, but it's telling either way) simply as "so beautiful" as she walked off the stage.

If women voters were still unsure of Donald Trump's sexism after he suggested that women who get illegal abortions should be punished, or after his entirely misogynistic statements about journalist Megyn Kelly, then Melania's speech is not going to sway voters. Plus, her husband's own actions undermined her words.