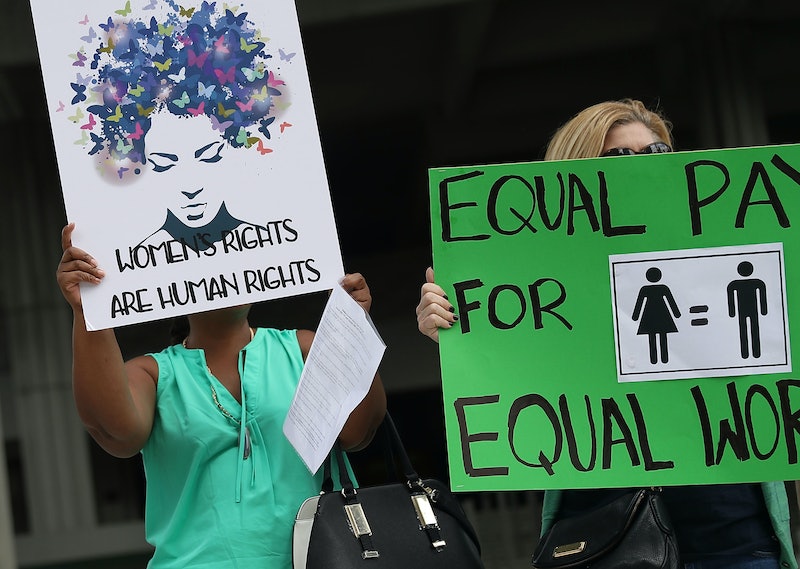 A new study from the National Women’s Law Center (NWLC) brings to light one fact we often overlook when we talk about the wage gap: it's not just about gender. According to the NWLC's analysis of U.S. Census Bureau data, the average Latina makes over a million dollars less than the average white man over the course of a 40-year career. That's over twice as much as the average difference of $430,480 between men and women. Black women also have a larger wage gap than the average white woman, making $877,480 less over 40 years than the average white man. These statistics highlight the fact that there isn't just a gender pay gap (although of course there is, and of course it's an issue) — there are also wage gaps based on race, sexual orientation, gender identity, age, and ability. And they, too, are major problems.

These statistics remind us why feminism needs to be intersectional: The same issues affect different women differently depending on other identities they hold. When we talk about the wage gap, we can't just consider how it affects white, cisgender women — we have to talk about how it affects women of color, transgender women, and more, for example, as well as how pay discrimination might affect people of other genders depending on their individual circumstances.

Here are a few reminders that when we talk about equal pay, we're talking about a whole lot more than gender.

1. Trans Women's Wages Drop By A Third After They Transition

A study in the B.E. Journal of Economic Analysis & Policy found that after transgender women transitioned from presenting as men to presenting as women, their wages dropped by a third on average. This difference is larger than the 81 percent gap between men's and women's earnings in 2006, when the study was published. Revealingly, when trans men transitioned, their wages increased slightly, though not to the level of cis men's. These findings are consistent with the widespread workplace discrimination trans people face.

This study also provides proof that the gender wage gap really is the result of sexism. People often speculate that we can chalk it up to other factors like women negotiating less or spending more time with their kids, but here, we're talking about the exact same person, and their pay decreased when the only thing that changed was their gender presentation.

It's common for people to retire around 65, since that's the age Americans begin receiving full retirement benefits, but according to the Bureau of Labor Statistics, people over 65 make less even when they continue working full-time. Among full-time workers, the average weekly earnings at ages 65 and over are $740 for women and $942 for men, compared to $780 and $1,021 at ages 55-64. Age discrimination in the workplace and the hiring process is a rampant problem, especially for women.