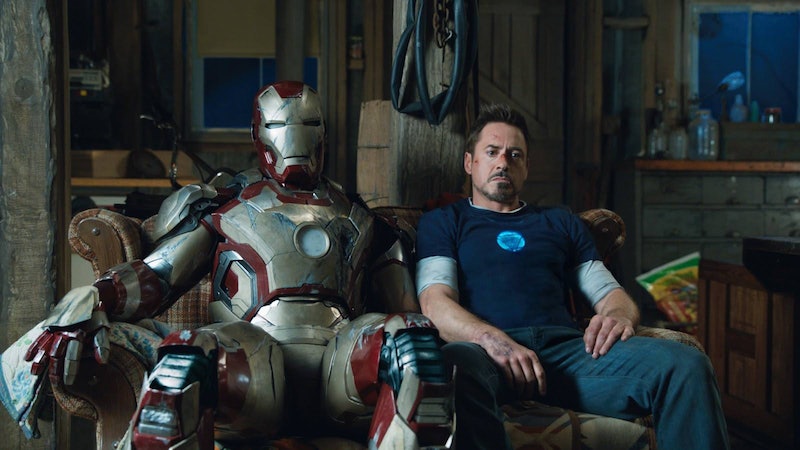 Iron Man is many things, but subtle is not one of them. In recent years, the hero has headlined three enormously successful films, co-starred in two (soon to be three) more, and his ego, or, more specifically, that of Tony Stark, definitely knows it. Tony Stark/Iron Man is known for being bombastic, self-congratulatory and all around ridiculous, in a charming kind of way. Iron Man's huge popularity is largely due to Robert Downey Jr., who manages to make the ridiculously rich playboy charming. Alas, even Downey Jr. can't make everything Iron Man says sound good. In his many outings onscreen, Iron Man has said a lot of crazy things, but these 13 insane things Iron Man has said in movies and TV shows take the cake.

Look, Iron Man says a lot of dumb things, mostly because his alter-ego Tony is kind of a jerk. He's full of himself, loves his clever quips and a bit gross. Of course, that's also part of his charm, so it's tough to say Iron Man is insane when fans really wouldn't have him any other way. Tony may be crazy, but he's our crazy, and if Pepper Potts can put up with him, not to mention Captain America, then I think audiences can too.

1. "It's an imperfect world, but it's the only one we got. I guarantee you the day weapons are no longer needed to keep the peace, I'll start making bricks and beams for baby hospitals." (Iron Man 2008)

To be fair to Iron Man, he said this when he was still Tony Stark, playboy, arms dealer, billionaire. Still, not super great.

2. "They say the best weapon is the one you never have to fire. I respectfully disagree. I prefer the weapon you only have to fire once." (Iron Man 2008)

Again, Tony in war-mode is the worst.

Tony talks a big game, but, come on, he totally wanted in on the Avengers from the beginning.

Ooof, Iron Man, you've gotta calm down with that ego.

This is not only an insane declaration, it's also a very unattractive concept.

Any insult against Captain America is insane, but this one is especially messed up. I mean, doesn't he know how special Cap is?!

Another Captain America burn, and possibly the beginnings of Civil War. Why can't we all get along?

That sounds pretty great, but is really a fantasy. I mean, if smart guys always covered their asses, then Iron Man movies would be incredibly boring.

Iron Man really needs to learn to think before he acts.

OK, I get that Tony wants to be super supportive of his new Science Bro Bruce Banner, but he knows why Banner can't get angry, especially when they're flying above ground on a massive helicarrier.

I have to admit, this is actually a pretty accurate burn directed at Red Skull.

Because nothing's more insane than your run-of-the-mill rape joke — Prima Nocta is the tradition of a king deflowering virgins on their wedding night before the husband. For shame, Iron Man, for shame.

If Iron Man wants to be a little less crazy, then maybe he should lay off the rape jokes and stop insulting Captain America. But, based on the insane trailers for Captain America: Civil War , I'm guessing there's only hope for one of those changes to come true.