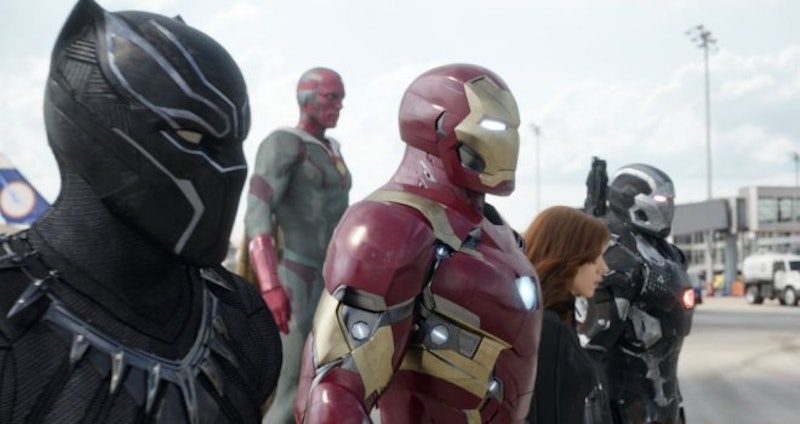 Marvel's mightiest are set to go head to head in Captain America: Civil War this May, when Iron Man and Captain America lead their respective teams of superheroes against each other in a battle over a political issue. But this isn't just some squabbling between Bernie Sanders supporters and Hillary Clinton fans on Facebook, this is going to be an all-out brawl that will change the course of the Marvel Cinematic Universe forever, and may even see the deaths of some heroes. But in the conflict, who side is the right one? As a Captain America fan, I've already given my case as to why Team Cap is in the right, so now I'll play devil's advocate and explain why Team Iron Man is right in Marvel's Civil War.

First, you have to understand what it is that Iron Man and Captain America are fighting about. The main issue has to do with a set of United Nations documents called the Sokovia Accords. These documents call for the registration and regulation of superheroes for the use of military/law enforcement. Under the Accords, the Avengers and other superpowered individuals would no longer be allowed to operate freely on missions, like fighting bad guys, and would instead be subject to government oversight, needing permission and/or instruction before acting.

After large-scale battles involving superheroes, like the Battle of New York in The Avengers and the Battle of Sokovia in Avengers: Age of Ultron, the decision was made by the U.N. that superheroes were too dangerous to leave unchecked. And that's what the real argument in Civil War boils down to. Iron Man, who feels responsible for Sokovia since he created Ultron, agrees with the Sokovia Accords, and wants the Avengers under government jurisdiction, believing that if superheroes have no oversight, then they're essentially glorified vigilantes. Captain America, on the other hand, doesn't believe he should need permission to intervene on behalf of people who need help. He also likely has some mistrust in authority following the events of Captain America: The Winter Soldier, where S.H.I.E.L.D. was revealed to have been infiltrated by HYDRA at the highest levels.

Basically, the argument comes down to freedom versus safety. If you want a real world parallel, just look at the Patriot Act. Supporters of the bill approved of the NSA's ability to stockpile citizens' phone records in the name of national security, while opponents believed this to be a violation of their personal freedoms. As for Iron Man, he seems to value safety over freedom. Since he himself is potentially dangerous, he would prefer a system of government checks and balances in place to make sure that he, and others like him, don't become a threat to society. Without that system in place, the potential exists for threats (like Ultron) to emerge from within the Avengers.

Not only that, but Iron Man also makes a good point about the Avengers being vigilantes. No one on the team is an elected official, nor were they appointed by any elected official (though they were first brought together by a government agency). They are a group of super individuals acting independently in what they consider the public's best interest, but they don't really answer to anyone. This is potentially a formula for corruption, and also probably illegal since taking the law into your own hands as an ordinary citizen is generally frowned upon.