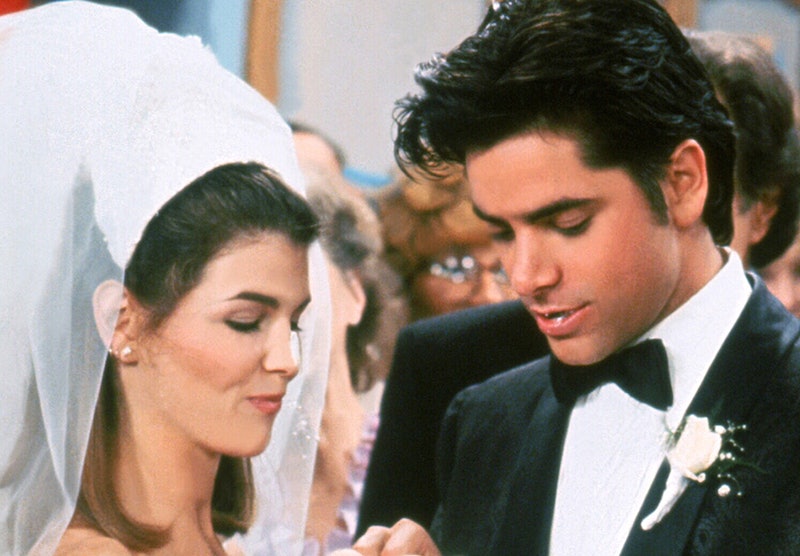 Before there were nicknames for 'shipping couples from television shows (LoVe from Veronica Mars, Snowberry from The Flash... you get the idea) there was a great love on television that melted every viewer's heart into globby clumps of glue. Before the term "'shipping" even existed in our communal conscious, we all 'shipped one of the most glorious and attractive television loves of all time. This love was the often tempestuous one of what is perhaps the most good looking couple in the entire universe, Uncle Jesse and Becky from Full House. From the moment their eyes first met, when Becky was just Danny's perky co-host, it was clear this coupling was going to provide some serious relationship goals. While their relationship was often awesome, it wasn't always perfect and that's why there are emotional stages of shipping Jesse and Becky — it was a bumpy ride, and sometimes we swooned with Becky, sometimes we cried with Jesse, and sometimes we laughed with the both of them. But, even so, it was always a wonderful ride.

At first, when Jesse laid his soulful and bad boy eyes on Becky, we were all a bit jealous. Sure, we were all children and Uncle Jesse isn't a real person, but that didn't change anything. Then, we all soon came to realize that this was bigger than us and so we all began to 'ship this couple before we even knew 'shipping was a thing. Here are 13 of the emotions 'shippers of Becky and Jesse have been through over the course of Full House.

1. The Love At First Sight Amusement

At least for Jesse...

2. The First Kiss During The Christmas Episode Swoons

We knew it was going to happen and we couldn't handle the wait.

3. The "Why Did You Get Her Those Earrings So Early On" Discomfort

Slow down there, speed racer. Becky buys Jesse a sweet Elvis-themed gift to add to his collection, so homeboy gets a little carried away and buys her diamond earrings and then burns his address book. Viewers collectively cringed.

4. The Worry When A Date With Jesse Is Going To Be Bid On At An Auction

How is that OK for a relationship? It's obviously going to lead to trouble.

5. Followed By The Relief When Becky Wins The Bid

Thank goodness Becky's jealousy got the best of her, or we might have seen another woman as Mrs. Katsopolis!

6. The Confusion When They Get Engaged The First Time

The two were fighting because Jesse was jealous of Becky's thing for movie star Todd Masters, and he was also attempting to make her jealous. Then he proposes? It was all quite confusing.

7. The Sads When Becky Leaves Jesse At The Altar

I mean, they clearly weren't ready for marriage, but that didn't make it any less sad.

8. The Horror When They Broke Up Over Vacation Time

It's OK that you guys don't agree on what you want to do for vacation! There are plenty of other things you have in common.

9. Followed By Another Dose Of Relief When They Got Back Together

They love each other and miss each other so of course they got back together. And we all were all able to breathe again.

10. The Fear When They Got Engaged Again

This engagement was also caused by jealousy: Becky was super jealous of Jesse's Greek ex-girlfriend who claims they got married. So then Jesse proposes to Becky and it's concerning because what if it doesn't work out again?

11. The Disappointment When Jesse Got Thrown In Jail

We all had such high hopes for Jesse to actually behave like a grown up. And he blew it!

12. The Bittersweet Feels During Their Wedding

On one hand, it was beautiful and amazing. On the other, it was so sad that the end of an era was at hand.

13. The All-Consuming Excitement When Jesse Found Out Becky Was Pregnant

Those babies were going to have the best genes of any children ever.

The love between Jesse and Becky was wonderful to watch — a bumpy ride, yes, but a joyous one. Those two were such relationship goals. Here's to the growth of their love in Season 2 of Fuller House.