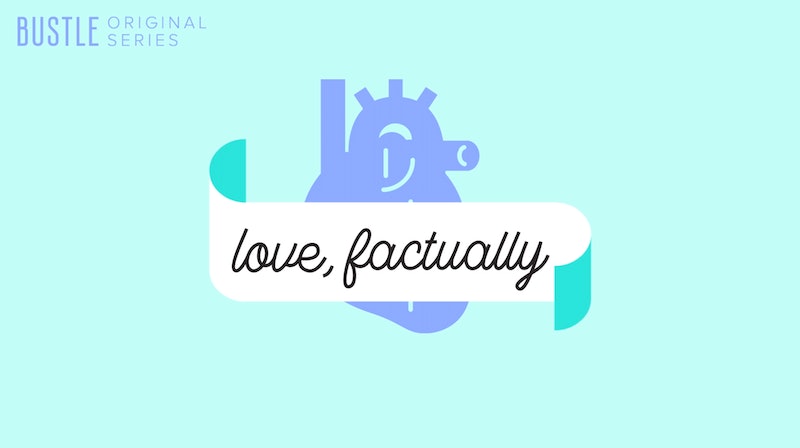 If you have ever gone through a breakup or been dumped, you know that it impacts much more than just how you spend your Friday nights. When dealing with the aftermath of a breakup, many of us feel totally emotionally helpless, as if our thoughts and actions are beyond our control; we may even feel like our brain is kind of working against us. And guess what? We're totally right. As the first episode of Love, Factually — Bustle's new video series exploring the real facts behind how we experience love, dating, and relationships — reveals, there are biological reasons why we stay emotionally hung up on someone we know wasn't right for us to begin with. Our brain's chemistry is responsible for many of the most painful and confusing aspects of a breakup, from becoming fixated on an ex, to the almost-physical pain of heartbreak.

In this episode of Love, Factually , neuroscientist and professor Dr. Lucy Brown and psychologist Dr. Suzanne Lachmann explain how our brain chemistry during a breakup makes us unable to "just snap out of it." Luckily, in the end, our brain chemistry is also the thing that allows us to finally move on.

Watch the episode below, and read on to learn about five things your brain is doing as you refresh your ex's social media feed for the 98th time today. You can find the entire first season of Love, Factually on Bustle's Rumble page!

1. Your Brain Is Literally In Withdrawal From Your Ex

To get to the bottom of this, Dr. Brown and anthropologist Helen Fisher created an experiment: they put people who had recently been romantically rejected into an MRI machine, and showed them pictures of both platonic friends and the person who had recently dumped them. When they saw the person who had rejected them, Dr. Brown tells Love, Factually, "many brain areas were active...that are active when people are withdrawing from cocaine. This is like a drug addiction."

So that's the real reason why you can't stop thinking about your ex — it's not because they were a great cook, or had a wonderful sense of humor, or they changed the passwords on all their streaming video accounts the second you guys broke up (although let's be real, that last one really hurt).

2. The Same Neurons That Made You A Good Partner Might Now Make You Obsessed

Have you ever felt like you were watching yourself from outside your body (or even watching someone else on TV) as you engaged in really confusing post-breakup behavior? Like sending, say, a few dozen really casual check-in texts to your ex over the course of an hour? You know you shouldn't do it, but it just feels like you kind of...can't not do it? The fact that you feel like you can't stop yourself from engaging in this kind of regrettable behavior might even send you into a shame spiral — you're an adult! You shouldn't need to have your roommate hide your phone from you inside a box of bran cereal just to keep you from texting your ex, right?

Actually, you're less to blame for this one that you might think.

As Love, Factually's Anna Parsons explains in the above video, the ventral tegmental area in the stem of the brain — the part of your brain that controls both unconscious acts like breathing, but also processes pleasure, reward, and the act of falling in love — remains unconsciously in love with your ex after you've been dumped. As Dr. Brown says, "That's really at a non-verbal level of the brain. No wonder it's so hard to control."

And according to Diane Kelly at Gizmodo's Throb blog, our brain chemicals can push us to act in thoroughly undignified ways after a breakup. As Kelly notes, "Turning on the reward neurons releases repeated floods of the neurotransmitter dopamine. And the dopamine activates circuits inside the brain that create a craving for more. That craving gives you motivation, and encourages you to try out other behaviors that will help you get more of whatever it is you need. In the case of romance, the thing you need more of is your beloved."

These are the same chemicals that made you just call to say "I love you" 20 times a day when you started dating. The flow of these chemicals slows down as heady, passionate new love turns into a more level-headed partnership. But during a breakup — once your "supply" of these neurotransmitters becomes sharply cut down — your brain becomes panicked. How will it get more, when its main source has fled the scene?

And so, those same circuits that motivated you to act sweet to your S.O. in the early days of your relationship in order to see more of them are now motivating you to drive by their house to see if they're home, engineer an "accidental" meeting at their favorite coffee shop, or stand underneath their bedroom window playing an '80s power ballad.

None of this is to say you shouldn't try to control your behavior when you're going through a breakup — you absolutely should, especially if you're feeling moved to do something you might really regret once you are feeling more clear-headed. But if you can't stop reading your ex's Twitter feed? Don't feel too mad at yourself; you're only partially in the driver's seat here.

3. The Pain Of A Breakup Is As Real To Your Brain As Physical Pain

Fisher and Brown also found that the part of the brain that processes anxiety about physical pain — the part of your brain that gets nervous about breaking a bone before you take your first-ever ski lesson, for example — became active when people who had recently been dumped looked at photos of their exes. So when you're feeling "heartache," your brain is processing it as if it were a literal heartache.

4. You Will Eventually Feel Better...

In the days and weeks after a breakup, it can be really easy to think that you will never feel good again. Knowing all the facts listed above, that makes perfect sense — I mean, your brain is thinking about your ex all day! Of course it feels like you'll be this sad for the rest of your life.

But even though certain parts of your brain seem to be working against you during a breakup, other parts are working overtime to get you back on your feet. Your ventrolateral prefrontal cortex — the part of your brain that processes emotional reassessment — is already imagining a better future without your ex. Dr. Brown describes it as seeing a video of two cars headed towards each other, and then having the video cut out — we initially think they're going to crash, but then, we imagine that they might have swerved out of each other's way at the last second, too. This is your ventrolateral prefrontal cortex at work — coming up with a new ending to the story of your relationship, where your breakup doesn't mean that you'll never be happy again. Instead, it's a chance to start all over.

5. ...But Maybe Not As Quickly As You Would Like

So that's the good news. The less-good-news? Any formula your friends may have told you about how long it will take to get over an ex — i.e. "The length of your relationship divided by two;" "Three months if you were casual, six months if you were living together;" "By the time you finish this taco party platter," etc — are wrong. As Dr. Suzanne Lachmann explains in the video, "It has to do with what your personal experiences were growing up, what your family was like, and therefore, there can't be one formula."

However, while there's no way to speed things up, there are ways to make sure that the damage of your breakup doesn't follow you around for longer than it should — Dr. Lachman does suggest designating a friend to help prevent you from making bad decisions while you're healing, and not being too hard on yourself if you slip up and reach out to your ex. After all, it wasn't your idea! It was your brain's!

And when saying the sentence, "It wasn't my fault! My brain did it!" sounds absurd to you? That's a pretty good sign that you're pretty much over your breakup.

Want to know more about why love makes us feel good, bad, and everything in between? Check out the entire first season of Love, Factually on Bustle's Rumble page!

More like this
15 Ways To Deal With A Toxic Family During The Holidays
By Gabrielle Moss and Carolyn Steber
Bumble's "Compliments" Feature Lets You Message Before You Match
By Lexi Inks
6 Ways To Set Boundaries With Your Family During The Holidays
By Lexi Inks
Are Capricorn & Aquarius Compatible In A Relationship? Astrologers Weigh In
By Kristine Fellizar
Get Even More From Bustle — Sign Up For The Newsletter