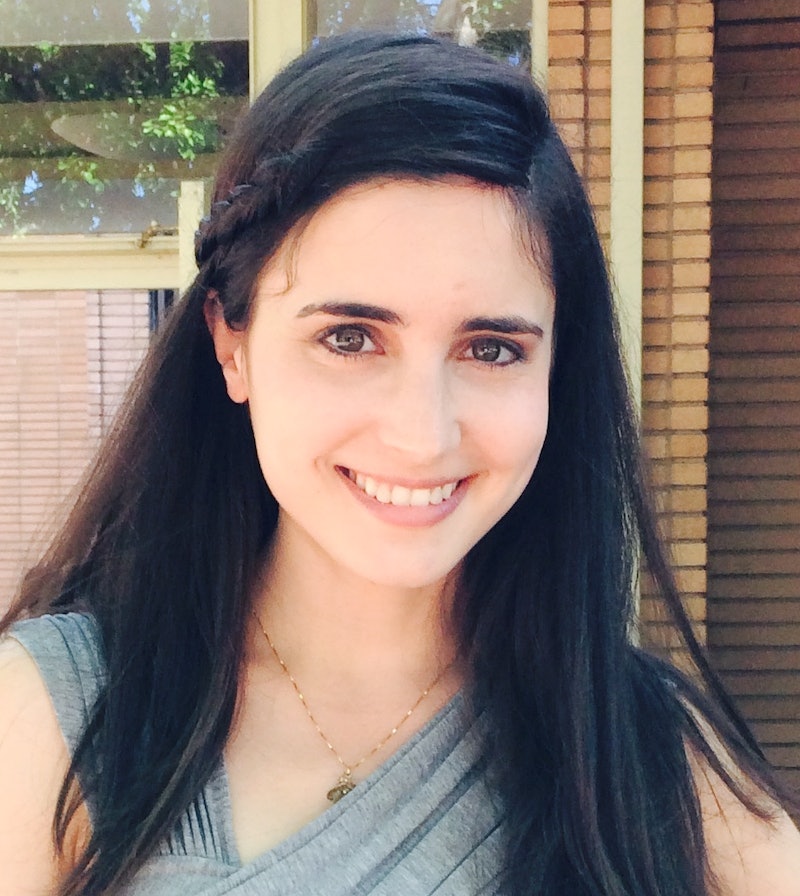 When I began twirling my hair in high school, I never imagined that it would eventually develop into trichotillomania. Around my freshman year, I remember becoming cognizant of my hair draped around my shoulders while I was taking notes in History class. Throughout that hour, I began to slowly, methodically, twirl my already-curly hair into little ringlets. It felt safe and comfortable, and it kept me just distracted enough, but not too distracted to keep me from my note-taking. The more I did it, the more I enjoyed the nurturing, repetitive motions that calmed my nerves and kept potential boredom at bay.

Twirling my hair became a habit—a motion I immediately went to when I was experiencing stress, boredom, or nervousness. This habit, which had a calming effect on me, went from something I did during a couple of classes, to some something I did during early mornings; after a couple of months, it became something I did nearly every day. I twirled between class, before skating practice, after breakfast—nothing could keep me from my habit. People began to notice. My grandmother, ever astute, would harass me about it in her Kentucky drawl many times throughout my high school years: “You’ll tear your hair out!” Of course, I never really thought I would, even though sometimes I’d pluck a neat, brown strand from my head and watch it fall delicately to the floor, or somewhere else I’d chosen to hide it, so no one would see the pile I began accumulating.

Fast forward a few years: Around the time I moved to New York and got an office job, my hair twirling became exponentially worse. Sitting in front of a computer eight hours a day took me beyond just twirling my hair; I had begun to full-on pull on it.

Living with trichotillomania is a struggle, and it requires patience and a desire to overcome that urge for comfort, rhythm, pain, and release.

To keep my attention on the task at hand, I would type with one hand and pluck out my hair with another, strand by strand. Instead of twirling large clumps of hair — which usually meant less hair fell out — I was pulling out individual strands, caressing their texture (it’s amazing how each strand has its own unique feel), and experiencing an absurd satisfaction in its immediate release from my scalp. Especially during particularly stressful or high-anxiety moments, it functioned as a calming mechanism—basic, repetitive movements that kept me focused.

It wasn’t until an unexpected interaction with a total stranger that I realized my hair pulling was growing out of my control. It was August, prime and desperate time for any New Yorker to apartment hunt, and I’d found what I thought was the ideal spot on 8th Street, a place that lead straight to the heart of the East Village. The room I wanted had an unbelievably low price, and I was desperate to make the best impression possible on the other roommates. Finally, I set a date and time to see the place, and made my way there after work one afternoon. Within a few minutes of chatting with one of the roommates, we swiftly swapped our New York stories, hobbies, and work life. She began to show me around the place and suddenly exclaimed, “Oh, do you shave your head, too?” My hair was up in a messy bun, with a couple of fly-aways stuck on my sweaty skin.

I was baffled, completely caught off guard by the question. “I...sorry?” I stuttered.

She seemed equally surprised by my reaction. “Oh, I just noticed that the back of your head was cut. I shaved mine, too, once. I thought you did the same.”

I regained my composure and made some kind of unintelligible excuse. The conversation ended shortly after that, as we both awkwardly said goodbye. Needless to say, I did not get the room.

After sprinting home, I immediately rushed to the bathroom, doubling my mirrors so that I could clearly see the back of my head, hoping she was wrong. She wasn’t: The lower half of the back of my head was completely hairless, except for a little stubble—like I had completely shaved it off. I was mortified.

It was that unexpected confrontation that led me to learn more about hair pulling, also known as trichotillomania.

According to Mental Health America, trichotillomania is "officially classified as an impulse control disorder, along the lines of pyromania, kleptomania, and pathologic gambling, which involves pulling out one's hair." Because of the compulsive need to check, count, or pull, symptoms of trichotillomania are also considered close to those with obsessive-compulsive disorder (OCD). Though there is no determinate cause, some associate the onset of trichotillomania with a combination of factors: genetic predisposition, aggravating stress, and an overall disruption of chemical messengers between nerve cells in parts of the brain. It’s treated as a medical illness, but there still is not a lot of information or understanding about the disorder.

Aside from an offhand comment on an episode of Frasier, I’ve rarely seen trichotillomania discussed in the media, which makes talking about it to friends and family even more difficult, since it’s not a well-known disorder. Usually, my friends just make fun of me, because it is ridiculous to watch someone make the same motion over and over again. It even stresses many of them out, or gives them anxiety. The first therapist I told about my problem only told me, “Well, just stop pulling your hair!” No. Duh.

Throughout the years, my hair pulling has morphed into different actions. Some days, I’m obsessed with pulling my split ends. I stare and stare, willing them to disappear, but then wind up pulling them anyway, feeling immense satisfaction from that tiny slice of pain. On other, rare, days, I barely touch my head. But most days, my boyfriend has to pry my hands away from my hair.

Living with trichotillomania is a struggle, and it requires patience and a desire to overcome that urge for comfort, rhythm, pain, and release. Because my hair pulling had begun to affect both my work and social life, I knew I needed to take steps to get the help I needed. Finding the right therapist who focuses on cognitive behavioral therapy and working within a support group helped me immensely. After a few sessions, I began to stop viewing the disorder as a demon, and instead came up with daily activities that help me lessen the urge to pull, such as practicing meditation and breathing exercises to calm my anxiety. Most importantly, I learned to stop beating myself up when I don’t meet my own expectations. Living with any kind of disorder is a daily struggle, and I hope raising awareness can help others who are going through the same thing know they’re not alone.

More like this
19 Latinx Therapists & Mental Health Experts To Follow On Instagram
By Kaitlyn Wylde, Naydeline Mejia and Lexi Inks
10 Ways To Be More Empathetic To Your Partner
By Raven Ishak and Lexi Inks
Think Your Partner Is Cheating? These Tarot Cards May Confirm Your Suspicions
By Kristine Fellizar
The 19 Best Tweets & Memes About Bisexual Awareness Week
By Lexi Inks
Get Even More From Bustle — Sign Up For The Newsletter