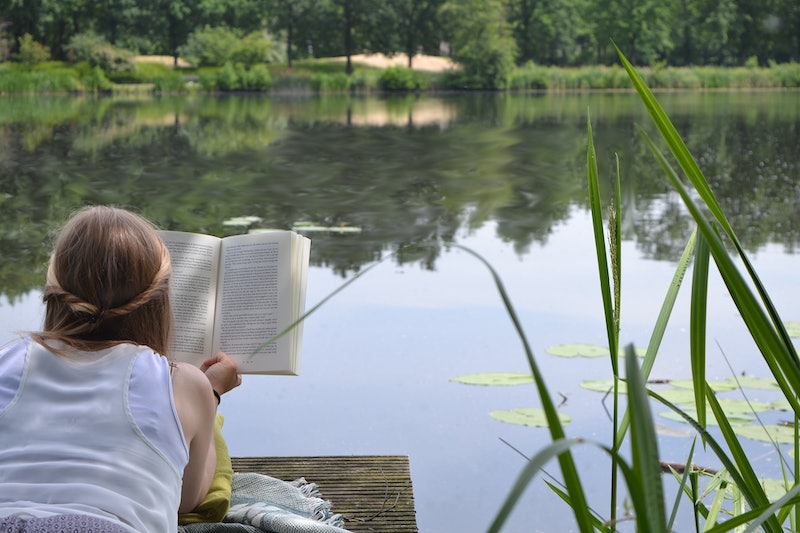 Anyone who knows me, even a little bit, knows that nonfiction is kinda my jam — or rather, it’s more than my jam: nonfiction is my one true literary love. And of all the great nonfiction there is to love in this world, beautifully written nonfiction books by women definitely rise above the rest. At least on my shelves, anyway.

Women writers of nonfiction, from Nellie Bly to Joan Didion, from Susan Orlean to Cheryl Strayed, are the reason I wanted to be a writer in the first place. There’s just something completely transforming about losing yourself in a true story, told so well that for a moment you almost believe it happened to you. I love being transported into the truth of someone else’s life, experience, culture, landscape — even when the true stories are difficult, or heartbreaking, I love that feeling of growing alongside a writer’s own journey. If the true story is beautifully told, even better.

My first journeys into the world were taken through nonfiction — through beautiful nonfiction writing I’ve swam with turtles in the Galapagos, backpacked across Morocco, joined a biker gang, eaten my weight in French food. And these on-the-page adventures have inspired me to go out and do the same things in my real life (or, at least most of them.)

Ready for your own on-the-page adventure? Here are nine beautifully written nonfiction books by women.

1. Behind the Beautiful Forevers: Life, Death, and Hope in a Mumbai Undercity by Katherine Boo

Introducing readers to the politics and superstitions of Annawadi, an Indian slum located alongside the international Mumbai Airport, Katherine Boo’s Behind the Beautiful Forevers is a book filled with a complex and unforgettable cast of characters. Over the three years that Boo researched Annawadi, she met children who made money picking trash, a college student, and elderly women who had been ostracized from their community, a furious slumlord, and many more. Haunting, troubling, and beautifully written, Behind the Beautiful Forevers is a nonfiction lover’s must-read.

2. However Long the Night: Molly Melching's Journey to Help Millions of African Women and Girls Triumph by Aimee Molloy

After studying as an exchange student in Senegal, Molly Melching was inspired to found the nonprofit Tostan — an organization dedicated to respecting human rights, the empowerment of African communities, sustainable development, and positive social transformation — and dedicate her life to helping improve the lives of Africa’s girls and women. However Long the Night is Melching’s story, describing her journey from college student to one of the most forceful voices advocating for women’s rights. Beautiful and inspiring.

3. If Only You People Could Follow Directions by Jessica Hendry Nelson

Beautiful, brave, and mesmerizing Jessica Hendry Nelson’s memoir of linked essays, If Only You People Could Follow Directions, will have you utterly captivated from beginning to end. Zooming in on the lives of three characters: Nelson’s brother Eric, her mother Susan, and Nelson herself, this memoir explores the legacy of addiction — from Nelson’s father’s death to her brother’s own struggles with drug use and mental illness — and the two women who love and grieve and strive to save their family from any more destruction. So beautiful it reads like fiction, Nelson’s voice on the page isn’t one to miss.

4. Daughters of the Samurai: A Journey from East to West and Back by Janice P. Nimura

In 1871, five young Japanese girls were sent to the United States by their government, with the goal of learning “Western ways” and bring those lessons home to a modernizing Japan. But after being raised in traditional samurai households, the life of an American schoolgirl was utterly foreign to these young women; who not only adopted the styles and traditions of their new culture, in San Francisco, but who then had equal difficulty re-assimilating to their culture of origin, upon their returns to Japan. Well-researched, totally fascinating, and beautifully written, Daughters of the Samurai tells a true story in American and Japanese history that most readers have probably never heard before.

5. Mermaid: A Memoir of Resilience by Eileen Cronin

Eileen Cronin was born without legs — and by the age of three, she became aware her disability made her unique: not just in her family, but in her entire community as well. What nobody talked about was the fact that a drug her mother had been prescribed: thalidomide, was the cause of Cronin’s birth defect — a fact even Cronin’s mother denied. Battling everything from childhood bullying to adulthood addiction, Cronin’s story is one of strength and resilience, and the importance of telling hard truths about our lives.

6. H is for Hawk by Helen Macdonald

Overcome with grief over the loss of her father, Helen Macdonald decided to train one of the most difficult and rebellious hawks alive — the goshawk. Already an experienced falconer, Macdonald became the proud adopted mom of a goshawk named Mabel, and the beautiful, wild creature ultimately helped her cope and changed her life. H is for Hawk is the beautifully written account of Helen and Mabel’s story.

7. An Unquenchable Thirst by Mary Johnson

As a teenager, Mary Johnson began her life as a sister with Mother Teresa’s order of nuns, the Missionaries of Charity. Taking vows of poverty and chastity, among others, Johnson moved to the South Bronx at the age of 19 to begin her life of faith and service. But remaining true to life-long vows made at such a young age is harder than Johnson realized, as she struggles to form her identity in a world where all her decisions were made for her. An Unquenchable Thirst is a mesmerizing read that'll take you into the mysterious world of religious callings.

8. Know the Night: A Memoir of Survival in the Small Hours by Maria Mutch

For two years writer Maria Mutch’s son, Gabriel — who is autistic, and also has Down syndrome — didn’t sleep through the night. Taking place over the course of those two years, during the hours between midnight and six a.m. Know the Night tells a story of the loneliness and isolation that comes with multiple disability parenting. Running parallel to Mutch’s story, and that of her son, is the story of Admiral Richard Byrd, an explorer who journeyed alone into the Antarctic wilderness in the 1930s — and whose sense of isolation resonated with Mutch’s own feelings while raising her young son.

9. Voices in the Ocean: A Journey into the Wild and Haunting World of Dolphins by Susan Casey

Dolphins are basically the most mesmerizing creatures on earth, so already this read is a win. In Voices in the Ocean, writer Susan Casey explores humanity’s beautiful and complex relationship with dolphins, from ancient history to today, and offers endless evidence as to why dolphins are literally just the greatest — they’re brilliant, stunning, and worthy of being protected forever. So no more polluting the oceans, mmkay?