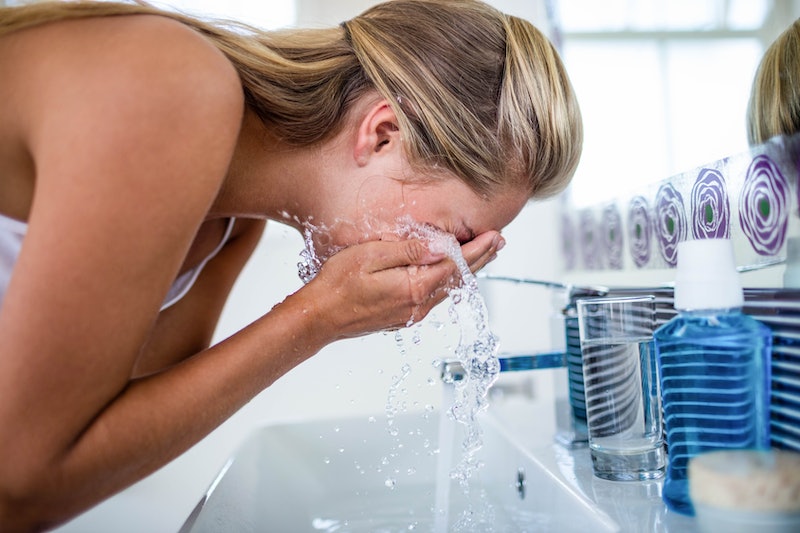 If you're a fan of the common face scrub or microexfoliant, step away from the bottle and take a quick gander at the ingredients first. Microbeads, a common ingredient in cleansing products like exfoliants, are not as safe as they may seem, according to recent studies. While your face may not experience the negative effects of microbeads, the environment is suffering from the accumulation of the tiny spheres in bodies of fresh water. And according to recent reports, New York may soon become the first state to prohibit microbeads.

The National Oceanic and Atmospheric Administration' s Ocean Debris website states that microbeads are also known by the name "microplastics," which are defined as plastic bits that measure under five millimeters. Certain microplastics are constructed for cosmetic use to increase cell turnover when exfoliating, and it is this variety of plastic that has scientists most concerned. Due to their minute size, these little spheres are literally falling through the cracks at water treatment facilities. After escaping through the filters, microbeads are transported into the wider environment through bodies of water — researchers have found them in the Los Angeles River, Lake Erie, and the Pacific Ocean. Scientists have also reported seeing countless numbers of the tiny microbeads in the Great Lakes, where sea life including fish and mussels consume them. In addition to the harm they may be causing the animals who mistake them for food, scientists are examining the possibility that the particles may ultimately be consumed by humans when they eat fish that have eaten the plastic beads. Scientists are currently researching the effects ingesting microplastics may have on humans to determine how dangerous they may be and whether microbeads could act as couriers for more dangerous chemicals.

News of the hazards of microbeads has inspired a mix of environmental consideration and indifference in cosmetics companies. In 2013 Unilever announced its intent stop using microbeads, and Johnson & Johnson and Proctor and Gamble made similar assertions, but most major manufacturers of personal care products have not commented on the environmental risk.

While we all love the feeling of being squeaky clean after using our favorite exfoliant, there are better ways to achieve the same effect without the negative environmental impact. The "Beat the Microbead" movement's website and corresponding app encourage cosmetics consumers to help protect the environment by educating themselves on the dangers of microbeads and suggest natural alternatives to products with microbeads. Loofahs and natural body brushes are equally effective exfoliants (ask former Victoria's Secret model Miranda Kerr), and environmentally conscious companies such as Sibu and Burt's Bee's use natural plant components as exfoliants. Gorgeous skin doesn't have to come at the price of environmental decline, and we're hoping New York starts a trend of environmentally conscious legislation for the rest of the United States to follow.

More like this
18 Medical-Grade Skin Care Products Dermatologists Swear By
By Danielle Sinay and Rachel Lapidos
All The Products Hailey Bieber Used For Her Birthday Makeup Look
By Olivia Rose Ferreiro
10 Makeup, Hair, & Skin Care Gifts That Beauty Lovers Will Drool Over
By Erin Stovall
The 15 Best Skin Care Gift Sets You Can Buy RN
By Rachel Lapidos
Get Even More From Bustle — Sign Up For The Newsletter