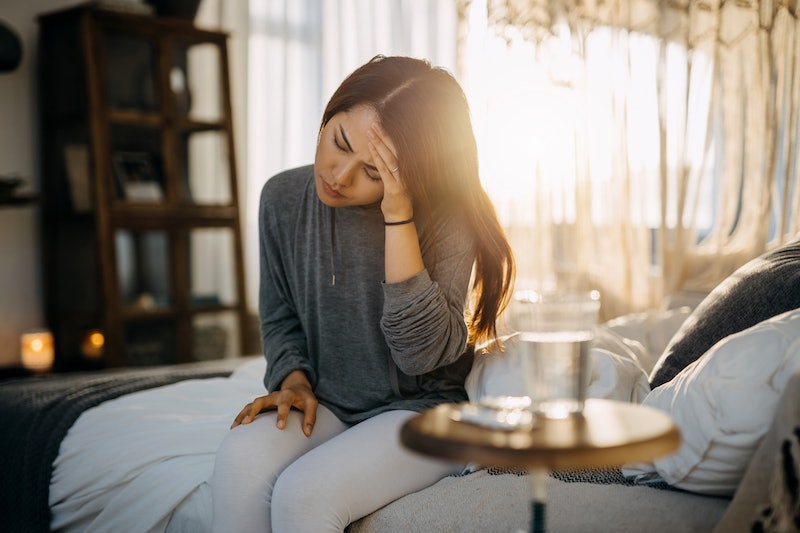 We've all been struck down by the mean blow of hormones at least once in our lives. Think back to a time you had horrible PMS, or struggled to sleep, or fought off intense cravings. If any of that sounds familiar, then you know first hand what it's like when hormones are out of balance. And I think we can all agree — it ain't fun.

That's why it's so important to keep hormones in check. Because when you don't, they can start to wreak havoc in the body. According to an article on Hormone.org, "These messengers control most major bodily functions, from simple basic needs like hunger to complex systems like reproduction, and even the emotions and mood." So really, it's no surprise that hormones gone haywire can make you feel pretty darn bad.

And sadly, this bad feeling can become an everyday thing for many women. It can even get to the point where you don't remember what "normal" feels like, and you start to accept your life of mood fluctuations, horrible sleep, and a nonexistent sex drive. But trust me, this simply doesn't have to be the case.

Your doctor can help get you back in working order if you recognize there's a problem. So check out some of these subtle signs that your hormones are out of balance.

Think of those few food-crazy days leading up to your period. You know, the ones where everything looks like pizza and donuts and chocolate? It's totally normal to feel extra hungry during PMS, but cravings that never go away may be a sign of a bigger problem.

As Dr. Sara Gottfried said on MindBodyGreen.com, "If you find yourself ravenous on a consistent basis, your hormones could be to blame. High cortisol or insulin, for instance, can cause those intense urges for sugar or wine, while adrenal dysregulation can lead to electrolyte imbalances that make you reach for salty snacks." While there's nothing wrong with snacking, it's definitely something worth keeping an eye on if it feels out of control.

2. Your Memory Is A Shade Of Its Formal Self

Everyone's forgetful from time to time. Occasionally losing your cell phone? Periodically forgetting to respond to an email? No big deal. The issue is when memory problems start to affect your life, or you feel like your brain just doesn't feel "quite right."

This could be due to hormone problems caused by prolonged stress. As Aviva Patz noted on WebMD.com, "If you're under any amount of long-term stress ... your body is constantly pumping out stress hormones such as cortisol. And studies suggest that consistently high levels of cortisol can hamper your ability to learn new things and remember them later. In fact, it could permanently damage brain cells, particularly in the hippocampus, where information is tagged for long-term memory." Yikes. Best get that stress under control before it becomes a bigger issue.

3. Sleep Is Not What It Once Was

Out of whack hormones can make even the simplest of things seem so very, very difficult. This includes getting a good night's sleep. And when that's the case, the issue is often due to low levels of progesterone.

According to Paige Greenfield on FitnessMagazine.com, "Progesterone naturally plummets with menopause, but it can begin dropping as early as your thirties, when your ovaries start releasing fewer eggs. Because the hormone regulates your internal thermostat, a low level of it may cause your body temperature to yo-yo at night, resulting in night sweats that prevent deep, restorative sleep." Yea, definitely not a great way to spend the night.

Where once there was a vivacious, sex-crazed person now lays a tired human with a "headache." But who can blame you? In the same way hormones fuel your sex drive, they can also take them away. (Not fair, I know.)

If this sounds like you, know it's not your fault. According to Gottfried, "In most cases, estrogen dominance or low estrogen can be blamed, but your thyroid health and cortisol levels can also play a role. Add to that high stress, burning the candle at both ends and poor sleep, and sex is probably the last thing on your mind."

We often forget that skin shows signs of our internal health. After all, we don't get acne, and bruises, and dry skin for nothing. It's all a sign of something going on inside. So it's really important to pay attention to that epidermis of yours, especially when it's being all red, itchy, and annoying.

That's because dry patches can be one of the first signs that your thyroid hormone level is low. This hormone helps set your metabolic rate, and when you don't have enough, these systems can go into slow motion, according to Greenfield. As a result, the rate at which your skin cells turn over slows, resulting in dryness, redness, and rashes. Slap some lotion on, and be sure to tell your doctor.

6. You Are Struck Down With IBS

Nothing's worse than feeling awful and hormonal, and then getting struck down with irritable bowel syndrome (IBS), too. This can be caused by all sorts of things, such as stress and certain foods. But hormones can also play a role.

As Patz noted, "Recent studies suggest that abnormal levels of serotonin may be one cause of irritable bowel syndrome, a condition that causes chronic abdominal pain, cramping, and diarrhea and/or constipation for millions of Americans. And since most IBS sufferers are women, and many times symptoms get worse during menstruation, it could be that estrogen and progesterone are also involved."

7. You Are Suddenly More Hairy

Of course everyone has different levels of hairiness. What's normal for one woman may not be normal for the next. So what you want to look for here are drastic changes to your hair growth. As Chloe Metzler said on Health.com, if you suddenly grow a beard within a month, or notice coarse, dark hair popping up on our chest, it could be a sign of a testosterone-secreting tumor. But don’t freak out, Metzger warned, as tumors are rare and can often be treated with drugs or surgery.

If any of these symptoms sound familiar, it doesn't necessarily mean that your health issues are 100 percent due to your hormones, but it could certainly be the root of the problem, especially if you're experience more than one at the same time. In any case, be sure to talk with you doctor about causes and treatments so you can start feeling better ASAP.