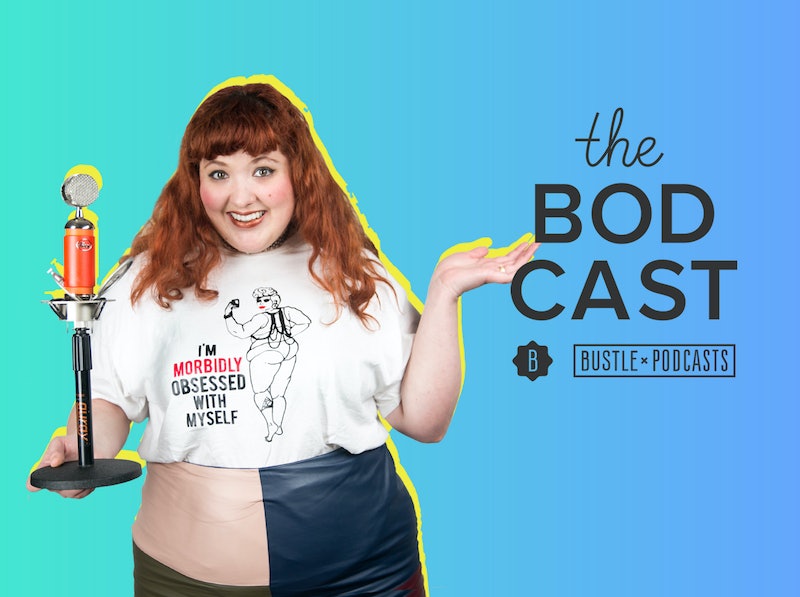 In the last two years or so, "body positivity" has become a mainstream buzzword: An umbrella term defined loosely as "all bodies are good bodies," and generally left at that. Of course, the notion that all bodies are good — if we define "good" as being worthy of things like tolerance, acceptance, fashion, sexuality, autonomy, beauty, etc. — is undoubtedly an important one, particularly when we consider how encouraged self-hate and self-critique are in contemporary Western cultures. But there's a whole lot more to body positivism than that alone.

In The BodCast, Bustle's new podcast for radical body positivity, I'll be joined by a different guest each week. Most often, they'll be a figure in body positive activism, and in particular folks who focus on analyzing and combating the many ways that living in a fat body can affect the way we are treated, the way we are paid, and the way we are represented (or, more accurately, misrepresented) in media at large.

As writer Lesley Kinzel put it on her blog, "In recent years, fat positivity has largely been subsumed into 'body positivity,' a toothless shadow of the overtly politicized embodiment the former once embraced. Body positivity applies to everyone, it treats all bodies the same, and it places the insecurities of a slender, conventionally-attractive young woman in her early 20s on the same level as the psychological gauntlet run by a middle-aged woman wearing a size 28 who dares to go to the beach in a bikini."

And that's the thing: At its core, body positivism is intrinsically connected to activism. It's connected to the acknowledgment that the way we each experience this world is incredibly different, and our bodies play an irrevocable role in that. It's rooted in a movement filled with humans who fight undeniable marginalization, showcasing the discriminations that come with existing in a body outside of the culturally-dictated "ideal." It's very much about fatness — and about far more than beauty.

As body positivity becomes more and more widely discussed, it's crucial to continue shedding light on issues of size acceptance, and that's exactly what we're hoping to do. Although there exist radical, inspiring voices like Bad Fat Broads and Kinzel herself who still tackle the nitty gritty of aesthetic-based discrimination, more conversations are always needed. And we're about to have a bunch of them.

To subscribe, you can catch us on The BodCast's Soundcloud and iTunes page!