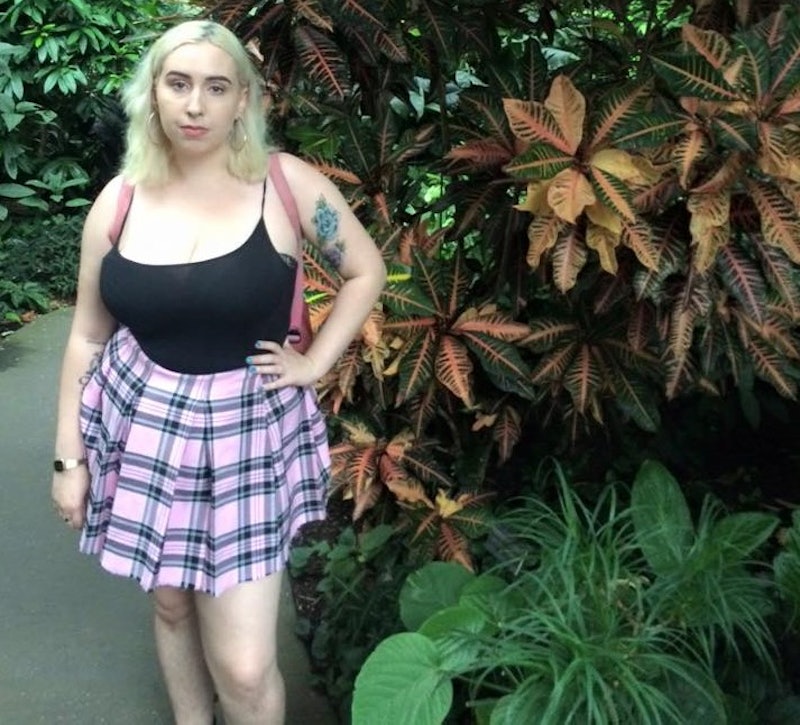 If you haven't heard of body positivity before reading this article, there are a couple of things you probably need to know. The movement is arguably a product of the fight against fat discrimination that began in the 1960s. Since gaining mainstream recognition in 2015, "body positivity" as a term has spread to mean the discovery of self love for and celebration of all bodies, but without as much focus being placed on the marginalized identities it was always meant to be giving visibility to. The term is almost a buzzword now, often used to describe any clothing collection that extends its size range or any celebrity sharing a picture of their stretch marks. But if fat-phobia is ever to be combatted, we need to have the tougher conversations.

In my opinion, celebrating self love in all its forms isn't a negative per se, regardless of how much it may seem to dilute the activist message at times. But I know plenty of folks who have been critical of contemporary body positivity — believing that it's lost its meaning as a social activist movement. In the minds of many, body positivity circa 2016 is used to sell clothing, elevate A-list celebrities, and be a general capitalist tool rather than an anti-establishment movement.

Writer and self-described "mouthy fat broad" Lesley Kinzel recently wrote about "falling out of fatshion" on her blog, and the eradication of politics from mainstream body positivity. She summed up the issue so many folks have with the link between fat activism and fashion, as well as appearance and sales. The essay tracked through fat activism's evolution into body positivity, noting how the former was a grassroots movement that plus size people truly needed. Not just to have more clothes — although that's undoubtedly beneficial and important — but to remove the discrimination that fat people suffer on the daily from the public consciousness: On the streets, in the workforce, and in health services.

As much as everyone deserves to love themselves, it's undoubtedly a lot harder to feel that love when both society at large and media continue to demonize your "obesity." Or as Kinzel put it in her essay:

We’ve lost the acknowledgement that women who are visibly, inarguably fat have very different experiences [from those smaller than them]. Their problems are not limited to feeling unsure about whether this skirt is too short, or whether they feel comfortable showing their arms, although these may be issues too; many of these women will also face overt and powerful discrimination when seeking healthcare and at their jobs, discrimination for which there is no legal recourse in most of the US. Many will face unjust economic consequences that can affect every aspect of their lives. And there is a world of difference between worrying about whether your cellulite is showing in a pair of size six shorts, and worrying about whether you can physically fit in a seat on an airplane, or whether a hospital will have equipment that can accommodate you during a health scare.

The reality is that fat discrimination can still affect people's careers: A 2016 study by The BMJ, a medical journal based in the UK, found that tall British men and thin British women are generally paid more than their short, fat counterparts. This in turn affects people's social standing, which then affects their quality of life.

Separately, Dr. Amy Blackstone, a professor of sociology at the University Of Maine, spoke to Broadly about why plus size women in particular are discriminated against in interviews and their careers.

"For women, being thin means taking up less space, something that is expected of women both literally and symbolically," she told the publication, succinctly summing up why women in particular suffer from fat discrimination. It's a comment that I believe doesn't just apply to the world of employment, but the entirety of contemporary culture and media.

Even plus size celebrities, whose fame often feels intrinsically linked to their fatness (á la Rebel Wilson's "Fat Amy"), feel the pressure to lose weight. Melissa McCarthy even hopes to eschew the term "plus size." This can feel problematic when we consider that the term so often empowers fat women who have reclaimed it, rather than making them feel even more distant (something model Ashley Graham has suggested).

Fat discrimination doesn't just affect plus size people's social standing and careers, though. The prejudice is found in the health sector as well. David Miller, associate professor of internal medicine at Wake Forest School Of Medicine, led a study regarding anti-obesity bias amongst medical students and found that almost 40 percent of the students held those biases without even realizing it. He told LiveScience, "Doctors are more likely to assume that obese individuals won't follow treatment plans, and they are less likely to respect obese patients than average-weight patients."

The fat discrimination found in health care is a reality that many plus size people have noticed and spoken out about. Curve model Elly Mayday, for instance, was allegedly told to lose weight by her doctor when she went in for symptoms such as back pain and fatigue. Had she not listened to her body and visited another medical professional, she might not have discovered that she had stage three ovarian cancer.

Backing up her personal essay with numerous studies into medical fat discrimination, Laura Beck wrote about the dangers of anti-fat prejudice in medicine for Jezebel.

Any fat person who's gone to their general practitioner with a head cold and been told to lose weight can [tell you]. There are lots of larger folks who are terrified to visit their doctor with real problems — real problems that may or may not be related to weight — because they don't want to be automatically be told to slim down before an examination is even conducted."

Even as a smaller plus sizer who can fit into larger straight sizes I've found discrimination at my doctor's office. I've been told that losing weight will solve any and all medical issues I've gone in for.

I still stand by my comment that the popularity of body positivity isn't an inherently negative thing. I would never want to rob someone of their right to self love and ability to express that self love. That said, we need to acknowledge thin privilege on a grander scale. We need to talk about the fact that fat discrimination can still affect people's legal rights and likelihood of conviction. If we're ever going to combat these ingrained social problems, contemporary body positivity has to focus on more than shopping. As much as my self esteem and the way I feel in a cute outfit are important factors to my wellbeing, my career, legal rights, and physical health are more important.

Moving forward, body positivity has to throw things back to its social justice roots. This isn't just a selling point for big brands that only want to represent the "right" type of plus size body. We need to shed light on and continuously discuss the still-existing issues in order to move forward in fighting all types of body discrimination, because Instagram #OOTD shots might not be enough anymore.

More like this
Most Comfortable Underwear For Big Butts
By Audrey Williams
42 Black Owned Fashion & Beauty Brands To Support Today & Always
By Mekita Rivas, Shea Simmons, Kui Mwai and Dominique Norman
11 Graduation Guest Outfit Ideas To Wear To Someone Else’s Ceremony
By Phoebe Avison and Claire Fox
Reviewers Say They Get The Most Compliments On These Trendy Pieces — & They're All Under $35 On Amazon
By Nicole Zane
Get Even More From Bustle — Sign Up For The Newsletter