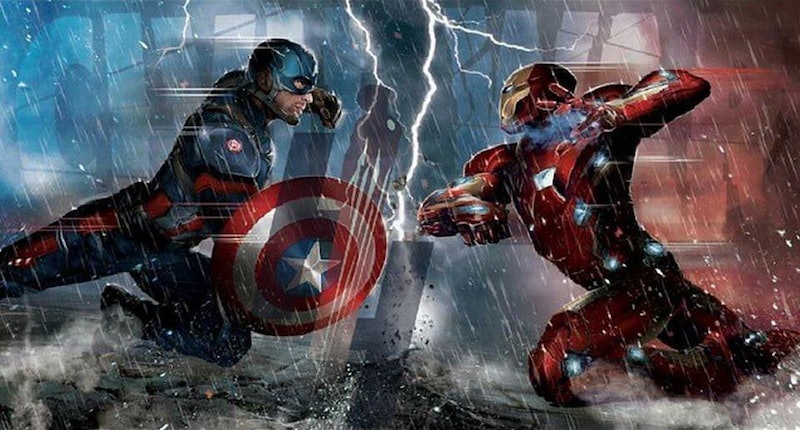 The honeymoon is officially over. Captain America: Civil War will have a decidedly different mood than the rest of the Avengers-related films, pitting friends against friends in an emotionally-charged conflict. Every movie in the Marvel Cinematic Universe has its dark moments; people die; cities are destroyed; and Steve and Bucky stare longingly at each other for what seems like hours. But Civil War could be the first of these movies to kill off an actual Avenger; and it's probably about time, if you agree with criticism the movies have received for being relatively low-stakes. Based on some clues in the comics and elsewhere, fans are wondering: will Captain America die in Civil War ?

If he does die in that film, it won't really be the first time. Steve Rogers nearly meets his fate in Captain America: The First Avenger before being preserved and later awakened by Nick Fury and the rest of S.H.I.E.L.D. That death was a hero's sacrifice. Civil War shows the dark side of being a hero and of being a part of a hero team consisting exclusively of strong personalities. To borrow a famous reality show intro, it's what happens when Avengers stop being polite and start getting real. In case you've somehow missed all the hype leading up to this showdown, let me give you the Civil War basics: Iron Man and Captain America clash over proposed regulations for superhero activities and their rift divides the rest of the team into factions. Steve's rejection of Avenger oversight is tied to his continued efforts to bring Bucky back into the light, a mission some of his friends think impossible.

So, we've got a hero whose idealistic views and personal attachments fall outside of a new world order. Can't you just smell the tragic end in the air? If Steve goes down swinging for what he believes in, that's an in-character death with the potential to create immense shockwaves that will extend into future MCU films. In an interview with MTV News, actor Chris Evans said that Civil War lays a lot of groundwork for Avengers: Infinity War - Part 1 , which is scheduled for a 2018 release. "Cap 3 is gonna kinda be the set-up for the real battle," Evans explained. To me, that statement implies a reality-shifting moment in this movie, like the loss of a core Avenger.

As much as it would hurt to lose Steve, Marvel comics offer an interesting path for the MCU to follow. In a well-received 2007-2008 arc, Steve Rogers is assassinated after the events of the Civil War. Tony Stark offers the Captain America mantle to none other than Steve's lifelong best friend, Bucky Barnes. This shocking turn of events even prompted a clever response by The New York Times. "Captain America Is Dead; National Hero Since 1941" is the title of the review, which is fittingly written in the form of an obituary.

Should the films decide to take the route set out in "The Death Of Captain America" comic series, that would be a nice follow-through on the Bucky Barnes focus thus far. All Steve wants is for Bucky to be redeemed. And wouldn't becoming Captain America be the ultimate redemption? Of course, Steve Rogers' own destiny won't be public information until Captain America: Civil War comes to theaters on May 6.