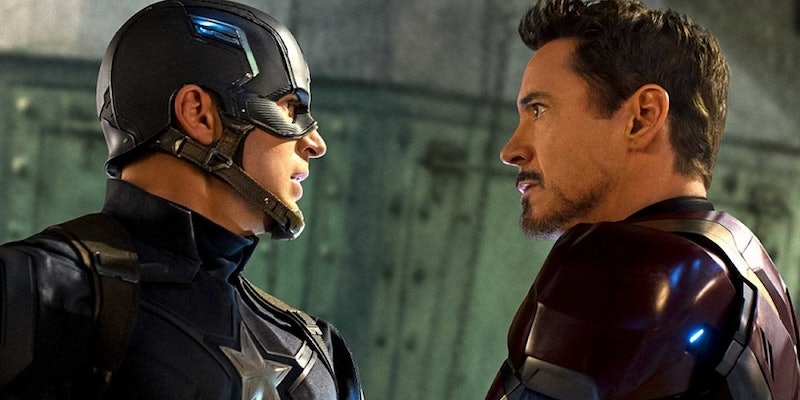 2016 is the year of superheroes fighting each other. Batman v Superman premieres on March 25, X-Men: Apocalypse pits mutant favorites against each other on May 27, and in between, there is of course the biggest clash of all: Marvel's Captain America: Civil War. The battle royale pits Captain America and his rag tag team of Hawkeye, Falcon, Winter Soldier, Scarlet Witch, and Ant-Man against Iron Man's stacked group of ringers: War Machine, Vision, and Black Widow; plus newcomers Black Panther and Spider-Man. It's going to be a fight for the ages, but how did Marvel's "Civil War" end in the comics? Will the movie keep the conclusion the same?

It's unknown at this time just how closely the movie is going to follow the "Civil War" storyline of the comics. There are already some pretty key differences between the two. For one, the movie is setting up Cap's friendship with Bucky, the Winter Soldier, as a main point of contention between Iron Man and Cap. That conflict doesn't exist in the comics. Secondly, the film's Sokovia Accords are looking to hold superheroes more accountable for their actions by putting them under government jurisdiction. This is fairly similar to how it goes down in the comics (though there's no Sokovia Accords), except that in the comics one of the biggest aspects of the Superhero Registration Act was that it would force heroes to disclose their secret identities; something that isn't really an issue in the movies. But setting these differences aside, both the film and the comics put Iron Man and Captain America, along with their respective allies, on opposite sides of a conflict. But will they end up in the same place?

In the comic storyline, Iron Man wins. There is a massive battle at the end of the conflict, and Cap has the chance to kill Iron Man but doesn't. He then decides to surrender, not wanting to see anymore damage done, and cedes the issue to Iron Man. Will the film come up with a different outcome, since this is, after all, a Captain America movie? That remains to be seen, but Iron Man winning the battle over superheroes registering with the government actually isn't the worst thing that happens to Captain America at the end of the comics' version of "Civil War" — Cap also gets himself killed.

In the aftermath of the war, Steve Rogers heads to the courthouse to turn himself in. As he is walking up the steps, he is shot and killed by a sniper. The man who took the shot is believed to be Crossbones, a villain who will be appearing in the film after appearing in Captain America: The Winter Soldier as the character's alias, Brock Rumlow. However, it's later learned that there was a second shooter (JFK, anyone?), and that shooter was Cap's ally Sharon Carter, who was brainwashed at the time. Carter is also in the film, reprising her role as Agent 13 from The Winter Soldier.

Given the involvement of both Crossbones and Sharon Carter in the film, especially considering all the characters already squeezed into the movie, it certainly seems like Captain America: Civil War could very well end in the same manner as the comic book storyline by killing off Steve Rogers. But even if that happens, there is still reason to hope. About two years after his death in the comics, Cap was brought back. The story was retconned to say that he never really died, and that the gun that "killed" him was actually a technologically advanced device that instead froze him in space in time.

Since it's pretty much understood that Chris Evans as Captain America will appear in Avengers: Infinity War, there's little chance that he'll stay dead if he's killed at the end of Civil War. My best guess is that instead of the weird gun story, the movie will bring him back to life using one of the infinity stones, since they're going to be the focus of the future films anyway and are all-powerful. But I'm getting ahead of myself. For all I know, Captain America won't even die in Civil War... but I'm betting he will.