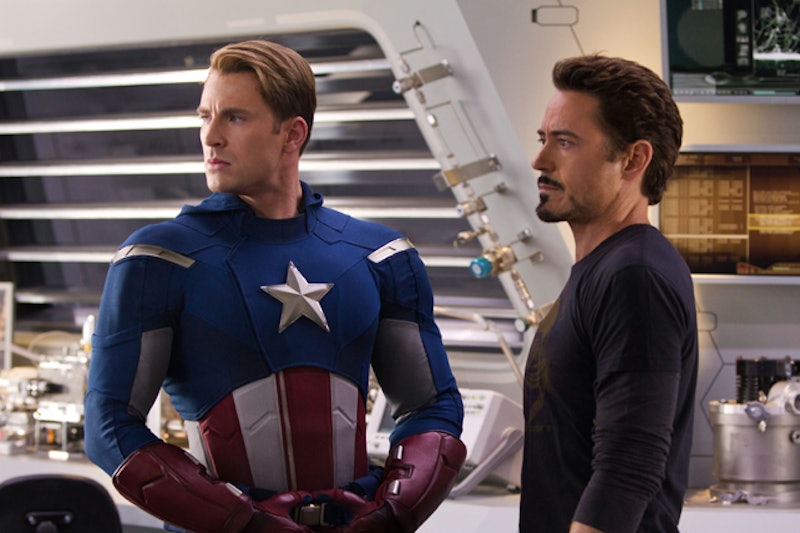 The biggest superhero showdown the big screen has ever seen (sorry, Batman v Superman) is coming on May 6 when Captain America: Civil War hits theaters. If you are still confused on the who, what, where, and why of Marvel's coming hero versus hero war, then you have to check out the ultimate Civil War primer courtesy of superfan Charles Villanueva. Villanueva used his masterful editing skills to create a supercut of the Marvel cinematic and television universes to showcase the bureaucratic and emotional decisions that will lead to Tony Stark and Steve Rogers fighting against each other instead of with each other in the coming movie.

Expect to experience all of the feelings when you watch this seven-minute examination of the Marvel universe to date. The studio was serious about laying the groundwork for this battle and it is all the more apparent when you can actually watch the evolution of The Avengers from Steve becoming Captain America in the '40s straight through to Tony's paranoia about global safety leading to the creation of Ultron.

This Civil War is about way more than preserving heroic autonomy — it's about friendship, loyalty, fear, and beliefs. It's going to be epic, guys, and here is a quick primer on how Marvel got from Iron Man to Civil War in 12 movies and four TV shows. Spoiler alert: It's been a crazy ride.

In the 1940s, Bucky enlists in the army to fight in WWII, leaving his small, but brave friend Steve Rogers behind in Brooklyn (and breaking hearts everywhere in the process). Steve wanted nothing more than to serve his country too, but he was too small and sickly to be deemed a fighter by the United States Army — although it quickly became apparent he had more bravery than most men twice his size.

Steve joins a project designed to create super soldiers and comes out the other side all bulked up and ready to take down bullies all over the world.

After being used as a propaganda piece, Steve embraces his identity as Captain America and finally goes off to fight in the war — effectively becoming the world's first Avenger.

Technically, Hydra pre-dates WWII, but when they threw their lot in with the Nazis, Cap and America took notice. Hydra would become the most insidious terrorist organization in the Marvel universe.

Bucky appears to die during a mission, but really he was captured and experimented on for the next 70 years. During this time he becomes an assassin known as the Winter Soldier who is weaponized by Hydra to do their bidding.

Meanwhile, Cap heroically goes down in icy waters during a mission and spends 70 years on ice, literally.

Tony Stark Is Captured By Terrorists

Fast-forward to the 2000s: Genius, billionaire, playboy, philanthropist Tony Stark, son of a former S.H.I.E.L.D. agent, has a change of heart about manufacturing weapons after he is taken hostage by terrorists who are using his weapons for destruction. Tony focuses all of his energy on creating the Iron Man suit and becoming a hero.

S.H.I.E.L.D. director Nick Fury assembles a team of agents and heroes to form The Avengers with the goal to protect the world against major threats as they arise.

The Battle Of New York Leaves Much Of The City Decimated

The Avengers assemble to take on an alien threat unleashed by Loki (who happens to be Avenger Thor's brother). In the process, much of New York City is destroyed and while people are grateful to The Avengers at first, this is a major turning point in terms of public opinion where The Avengers are concerned and the beginning of Tony's PTSD-fueled need to invent a better defense system.

It is revealed that Hydra has infiltrated S.H.I.E.L.D. at every level, leaving the public to believe it was a crazy corrupt organization to start with. As it collapses, Captain America reunites with his old friend and discovers what the government did to him.

In an attempt to create the ultimate world protection technology, Tony unleashes the sentient and frankly terrifying Ultron on the world. The damage this causes is irreparable, and Tony begins to believe no heroes, including himself, should have unchecked power.

The Government Presents A Bill That Would Keep Heroes In Check

Tony is all for the government measures while Steve is not a fan — the Avengers and other assorted heroes split over the issue.

Under the new law, Bucky is to be apprehended at any cost, but Steve is one noble dude and he is with Bucky to the end of the line. Shut up, I'm not crying.

And then all hell breaks loose.

Are you psyched yet? If you're not then this amazing video will do the trick.

More like this
Everything To Know About The Musical 'Joker' Sequel – & Lady Gaga’s Role
By El Hunt and Sam Ramsden
Stephen Graham’s Wife Plays A Vital Role In His Career
By Emma Madden and Sophie McEvoy
Sky’s New Princess Diana Doc Tells Her Story Like It’s Never Been Told Before
By Frances Stewart
Why Did Meatball Leave 'The Bachelorette'? His Second Chance Didn’t Last Too Long
By Grace Wehniainen
Get Even More From Bustle — Sign Up For The Newsletter