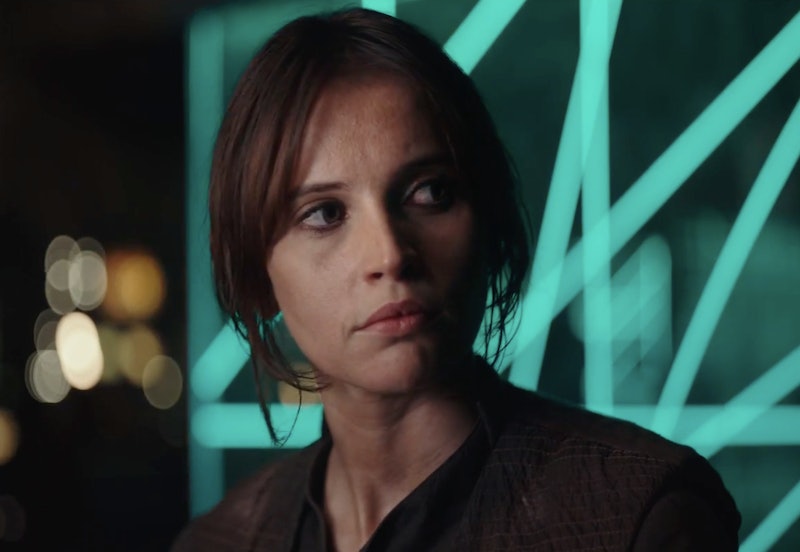 For those who have watched — and then re-watched over and over — the first official Star Wars: Rogue One trailer, you're probably left with one very specific question: Who is Jyn Erso? You're not the only one asking this, since this is the first we've heard or seen of the character, played by The Theory of Everything's Felicity Jones, in a galaxy far, far away. For this first Star Wars spin-off, out December 16, we're following smuggler Jyn Erso as she attempts to steal plans for the Death Star without being killed. No easy task, but we're equally as excited to get to know this woman who says things like, "This is a rebellion, isn't it? I rebel." Yeah, that's pretty badass.

The trailer for Rogue One: A Star Wars Story doesn't give much away, but what we do know is that Jyn Erso has been brought in to help steal the plans because she's got a history of smuggling. When she states her name, we get a sense of her rap sheet, which includes "forgery of imperial documents, possession of stolen property, aggravated assault, resisting arrest." We also know, thanks to Mon Mothma, she's been on her own since the age of 15 and is believed to be "reckless, aggressive and undisciplined" — all traits Jyn thinks should make her an asset for the Rebellion. This seems to be true, since they put a lot of faith in her smuggling skills to figure out what this weapon is that the Empire is working on. Though, since she was resisting arrest, she may not really have much choice in the matter.

And there lies all we really know about Jyn Erso. So this is where we now get into speculating who exactly this woman is and how she relates to the larger story at hand. What we know for sure is that this new film, set between Revenge of the Sith and A New Hope, will tell the origin tale of the Rebels, which Tech Times reported earlier this year, was going to be a little darker than the other Star Wars movies. The film's director, Gareth Edwards, has even called Rogue One a "war movie." While it seems like Jyn Erso may be there against her will in the trailer, it's rumored that she has a good reason for getting involved.

She's reportedly seeking redemption for the role her family played in designing the Death Star, specifically a scientist who has worked out the kinks in the plan. No word yet on how she's related to this character, but some are already guessing that it's her dad. But, before you go and assume this unnamed man is a bad guy, Radio Times is guessing that he's actually trained his daughter to destroy the Death Star, knowing what he's done is actually doing more harm than good. This has led the website, Making Star Wars.net, to guess Jyn is actually not a petty thief, but a scientist in disguise ready to re-wire the Death Star.

But, as the Star Wars Cantina forum pointed out, Jyn is seen wearing an outfit in the trailer that looks a lot like one worn by Agent Kallus, an officer of the Imperial Security Bureau, who is featured in the animated series Star Wars Rebels. Does this mean Jyn could flip to the Dark Side at some point? Anything's possible.

The most common guess though is that Jyn Erso could be Rey's mom, and it isn't so farfetched, since they both seem to be able to handle themselves just fine. Radio Times also says if you do the math between A New Hope and The Force Awakens — roughly 16 or 17 years — it does check out. Jyn and Rey's names are also oddly similar, in that Jyn means "gold, bright and beautiful" in Chinese, while Rey could mean a ray of light. Not to mention, Rey and Jyn look a bit alike and share a similar accent, a fact that shouldn't be chalked up to coincidence in a series like this.

But Rey isn't the only one Jyn Erso is rumored to be related to; already some have guessed she's a close relative of Qui-Gon Jinn. She could also be related to the white-robed Imperial officer who is played by Ben Mendelsohn and is seen in the Rogue One trailer, the story being that this officer abandoned her for her own safety. Or maybe she's her own character who means something big for the franchise that we can't even guess yet.

All of these possibilites are enough to make your head hurt. Not to mention that all these rumors leave us with more questions than answers about Jyn Erso. Luckily, we have about eight months to try and figure it all out.