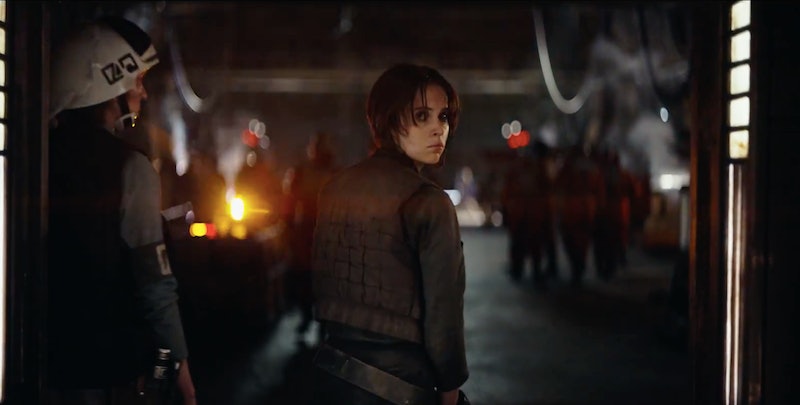 It's only been a few months since Star Wars: The Force Awakens shook the fandom to its core, leaving many wondering who Rey's parents are. Now that the Rogue One: A Star War Story trailer has dropped, no doubt people are wondering: Is Jyn Erso Rey's mom? Using the evidence the fandom has gotten so far, we can safely deduce that Rey is not Leia and Han's daughter, and likely not Luke Skywalker's daughter either. But Colin Trevorrow, the director of Star Wars: Episode IX, has confirmed that her parents will have some importance in the future:

“I’ve seen all of the theories… What I do know is that we’re going to make sure that that answer is deeply and profoundly satisfying, because Rey is a character that is important in this universe, not just in the context of The Force Awakens but in the entire galaxy, and she deserves it. So we’ll make sure that that answer is something that feels like it was — it’s something that happened a long time ago [in a galaxy] far, far away, we’re just telling you what happened.”

This led a lot of people to think that Rey might be a distant relative of Obi-Wan Kenobi, the one character who didn't seem to get a nod the way that other legacies did in the recent revival. But what if that's throwing us off the scent, and the new Rogue One character Jyn is actually Rey's mother? Here are all the bits of evidence that might support this theory.

The Timing Works Out

The Meaning Of "Jyn" Is Oddly Similar To "Rey"

The name Jyn means "gold; bright and beautiful" in Chinese. You don't even have to squint to draw a parallel between her first name and Rey's — although Rey means "King," it also harks to the idea of sunshine or a "ray of light."

They Have The Same Accent

"Oh, because they're British," you might be thinking. But actually, Ridley has an entirely different accent from Rey's in real life. She was specifically told to adopt a different accent for the movie — one that, incidentally, matches the one Jyn uses.

In the novelization of the movie, Kylo Ren says during the lightsaber showdown in the woods, "It is you." While fans have had nothing to go on out of context, it could mean that he knows who she is because he deduced what Han Solo did not — that she is secretly the daughter of their family friend, Jyn.

A lot of people were up in arms about the fact that Leia hugs Rey after Han's death instead of Chewbacca, who has a shared history with her and is possibly the only other being in the galaxy who could fully understand her pain. That being said, this is the first time Leia has seen Rey in the entire movie — and of course Force-sensitive Leia would recognize Rey for who she is. In this light, Leia's actions make a lot more sense.

Of COURSE she idolizes Han Solo, the "famous smuggler" — if Jyn is her mother, then baller smuggling is in her DNA. Even if Han didn't realize Rey was Jyn's daughter, the similarity between Rey and her mother would explain why he, the most suspicious man in the galaxy, trusted her so quickly, enough that he offered her a job. Ugh, please pass me some tissues before I die of feelings.

All this being said, it's just as likely that Jyn has nothing to do with Rey. It's mentioned in Return of the Jedi that a lot of spies died to get the Rebels the plans for the second Death Star, and there's no reason to expect that wasn't also the case when they stole the plans for the first one. As badass as Jyn is, she might not be long for this world. I wouldn't put it past Star Wars to dramatically kill off a main character (look at me, subtweeting Lucasfilm!). And even if she is Rey's mother, that still leaves us with the important question of who the heck her father is. Or is she another Force Baby just waiting to happen?

Only time will tell ... and I have a feeling we're going to be waiting for a long, long time.