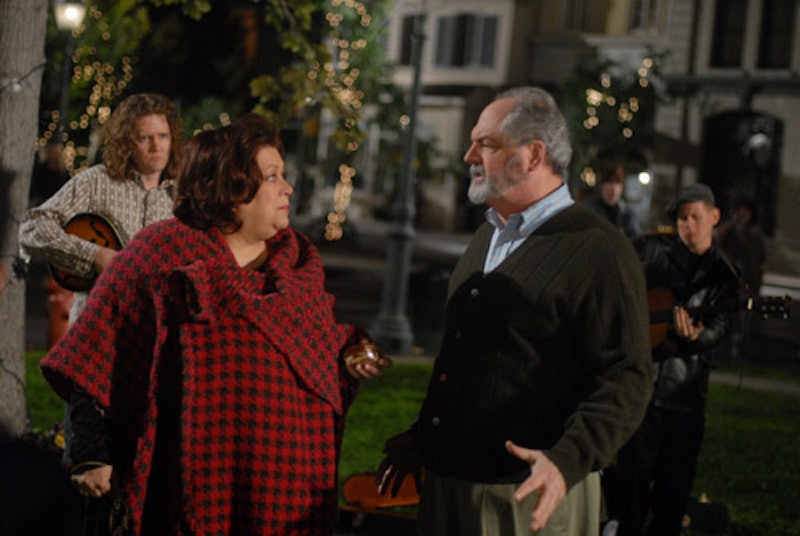 Stars Hollow is up to its regular old antics, and, this time around, they're preparing their very own musical. But, honestly, between the Sutton Foster casting news and the fact that the Gilmore Girls creator herself, Amy Sherman-Palladino, has quite the Broadway background (She produced the 2013 Broadway show Violet after her Gilmore Girls days), are we really surprised? In Entertainment Weekly's latest behind-the-scenes look at the upcoming four-part Netflix revival series, Sherman-Palladino and husband Dan could barely contain their excitement about the Stars Hollow musical in the Gilmore Girls revival that is set to take place in the third installment, "Summer."

“It’s all my pals I’ve worshipped from Broadway. We’ve ripped them out here,” Sherman-Palladino said of the star-studded musical cast. She's going all out on this one, since some of the Broadway names expected to appear in the Gilmore Girls-inspired inner musical include Sutton Foster (of course), Kerry Butler, and Christian Borle. The lyrics to the musical numbers themselves also happen to be written by Amy Sherman-Palladino, while the music has been composed by Jeanine Tesori — the Tony-winning composer of the Broadway hit musical Fun Home. Stars Hollow is about to go big time. Miss Patty would be proud.

And it seems like Lorelai is going to need to drink all the coffee she can to make sure she's on-board with this one. “It’s my most exciting thing!” shares Sherman-Palladino. “We get in these demos and sheet music. The songs are ludicrous and insane. We’re listening and wondering, ‘Is the Tony on the piano while she’s doing this? Is she in a room surrounded by awards?’ She’s mad, mad, mad in the best possible way.” Oy! This already sounds like quite the scene for an already crazy small town in Connecticut, but, according to Amy's husband Dan, this all was a long-time coming. “It’s one of those things we’ve wanted to do for a while — a small town reaching beyond its means and its talent to put on a musical."

So, what will this musical entail? Something tells me that this isn't just going to be a production taking place in Stars Hollow. In fact, I think it will be a musical about the characters of Stars Hollow. With all of the old characters back in town after a good chunk of them may have been away, the musical could be the bonding experience the town needs. And, to make things all the more awkward in an already gossip-filled chatty town, it could be the perfect way to publicly embarrass and point out Rory Gilmore's dating status or the antics at the Dragon Fly Inn. All I know is that I want tickets to this musical — Whatever it may be.

For now, we will just have to wait until we (hopefully) get a sneak peak. The Gilmore Girls revival will be premiering on Netflix later this year.

More like this
'Gilmore Girls’ Lauren Graham Just Revived Our Hopes For A New Reunion
By El Hunt
17 Photos Of The 'Wednesday' Cast Vs. The 1991 'Addams Family' Cast
By Grace Wehniainen
The First Trailer For 'That '90s Show' Includes So Many Nods To The Original Series
By Jack Irvin, Alyssa Lapid and Grace Wehniainen
Yes, That's Lindsay Lohan's Sister Singing In The 'Falling For Christmas' Movie
By Radhika Menon
Get Even More From Bustle — Sign Up For The Newsletter