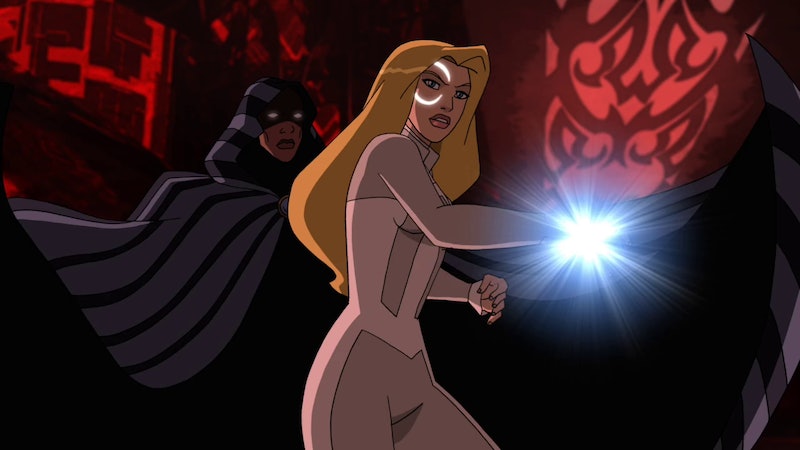 While some people fret about its inevitable eventual burst, the superhero bubble continues to defiantly expand with no limit in sight. This Thursday, television network Freeform announced that it had given a straight-to-series order for a show adapted from Marvel's "Cloak and Dagger" crime-fighting duo, as reported by Variety. But, as anyone who has longed to see the X-Men team up with the Avengers knows, the word "Marvel" does not always equal "Marvel Studios." So will Cloak And Dagger be part of the Marvel Cinematic Universe? Or will it be set in its own separate and unrelated world?

Variety doesn't mention anything about the show's placement within (or without) the MCU, and it's easy to see why its status is confusing. Freeform isn't home to any of the other current Marvel TV shows, all of which make their home on either ABC (Agents Of S.H.I.E.L.D., Agent Carter) or Netflix (Daredevil, Jessica Jones). The duo's only other onscreen appearance to date has been on the Ultimate Spider-Man animated series, and we all remember the dark days before Spider-Man was brought home to the MCU. On the page, at least, Cloak and Dagger are both mutants who often allied with the X-Men, which is one of the Marvel franchises owned by Fox rather than Disney (along with the Fantastic Four).

But while there's yet to be official word on Cloak And Dagger's placement within fictional superhero worlds, there are plenty of reasons to believe it will take place in the same universe as the Avengers and the rest of the MCU. First of all, Freeform is the network that used to be known as ABC Family — and, like ABC proper, it's owned by Disney, the studio behind the MCU, rather than by either Fox or Sony, which own the X-Men, the Fantastic Four, and Spider-Man.

Furthermore, while Cloak and Dagger are mutants (a term that the MCU is contractually not allowed to use since Fox owns the X-Men), they are technically a specific subset of mutants called "mutates," distinguished from their brethren by the fact that their powers had to be activated by an outside source, rather than being manifested from birth. This actually makes them more similar to the Inhumans who are established in S.H.I.E.L.D. as descendants of an alien race whose dormant abilities are activated by exposure to Terrigen.

Even if Freeform has to tweak the backstories of Cloak and Dagger slightly in order to avoid a contract dispute with Fox, they won't be the only mutants in the MCU whose origins have been changed: they'll follow in the footsteps of Age Of Ultron's Scarlet Witch and Quicksilver (mutants in the comics, normal humans given powers by the Mind Stone in the MCU) and S.H.I.E.L.D.'s Daisy Johnson (a mutant in the comics, an Inhuman in the MCU).

Even though Cloak And Dagger will most likely take place in the MCU, that doesn't necessarily mean that you should be expecting a crossover with the Avengers anytime soon. While some characters within the MCU's film franchises have put in appearances on ABC's Marvel shows (Peggy Carter, Phil Coulson, Nick Fury, Lady Sif, etc.), no characters that originated on the small screen have yet made the jump to the big screen. (Netflix's Marvel shows have even less of a direct connection to the MCU movies, only occasionally referencing "the incident" of the first Avengers film.)

So while Freeform's new series probably won't do anything to actively break continuity with the MCU, it will still probably be a largely standalone series with only tangential easter eggs linking it to the popular film franchises. But perhaps that's for the best; Freeform likely doesn't want their viewers to have to have intimate knowledge of all 12 MCU films and all four MCU TV shows in order to enjoy Cloak And Dagger.