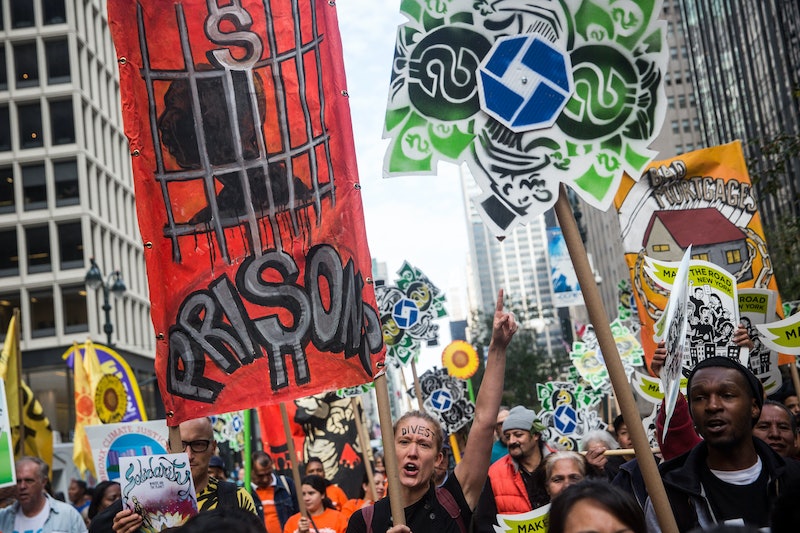 Though it has frequently made headlines for the past few years, divestment is not a new concept. College campuses and cities across the country have launched campaigns to divest from fossil fuels, from private prison companies, from gun manufacturers, and from companies profiting off human rights violations around the world — from the U.S.-Mexico border to the Israeli occupation of Palestine. But does divestment work to enact political and social change?

Many critics argue that it doesn't, saying that divestment (getting rid of any investments in a company) does not actually negatively affect implicated companies' share prices, but we've seen divestment work before: Take South Africa as an example. In the late 1970s, university students and faculty in the United States organized mass protests to convince their schools to divest from companies that traded or operated in South Africa, while many city and state legislators also advocated for divestment from the apartheid state. Divestment was not single-handedly responsible for the end of apartheid, of course, but its impact was twofold: Firstly, it put economic pressure on companies to either withdraw from South Africa or risk being stigmatized, and secondly, it significantly reduced the net capital movement out of South Africa. When paired with boycotts, divestment became an effective tool.

Today, the divestment movement that comes under the most fire is the Boycott, Divestment, and Sanctions movement that has taken college campuses in particular by storm. This divestment campaign targets companies that profit off or are complicit in human rights violations resulting from the Israeli occupation of Palestine. For the sake of complete transparency, I want to mention that I have supported this campaign at my own school, Northwestern University, as well as movements to divest from fossil fuels and private prisons, but I will now take the time to explain why I think divestment is both an effective and important strategy.

Although the University of California's decision to withdraw $3 billion worth of investments from South Africa was, in Nelson Mandela's view, a significant contribution to the end of apartheid, divestment doesn't always produce such significant results. However, when numerous universities have successful divestment campaigns, they send a clear message to corporations that their complicity in human rights violations is unacceptable — and they also send a message to people whose rights have been violated that others are standing in solidarity with them.

In the case of Palestine, BDS started out as a call from Palestinian civil society, and divestment is a way to support Palestinians in a way for which many of them advocate. In the case of fossil fuels, indigenous communities — particularly in low-lying island nations and coastal regions — and poor communities of color are the most immediately affected by climate change, and divestment addresses institutions' complicity in endangering the environment and people's lives. And in the case of private prisons, again, people of color — particularly queer and trans women and femmes of color — face disproportionate rates of wrongful incarceration and violence in prisons, and divestment tries to remedy this manifestation of systemic racism.

But while many argue that divestment's impact is largely symbolic, its tangible impact should not be underestimated. In March, security company G4S — which has been targeted by numerous divestment campaigns for its alleged ties to prison systems in countries including Israel and the United States — announced that it would be pulling out of Israel. The company denied influence by BDS in its decision, saying it was selling its business in Israel for "commercial reasons," but the BDS movement insisted that it had a role to play in G4S's announcement.

Some argue that instead of seeking divestment, activists should negotiate with university administrators and regional lawmakers to achieve real political change. But these two strategies are not mutually exclusive. Divestment as a tactic is effective, because it is a way for students in particular to engage in a powerful act of protest, and as Piers Telemacque, the National Union of Students vice president for society and citizenship, pointed out in an op-ed for The Guardian last year, it has worked across industries for decades, both politically and economically.

Divestment is just one tool to challenge systems of oppression. It should be and usually is accompanied by boycotts, protests, walk-outs, die-ins, and numerous negotiations. That being said, divestment is an important tool that works to delegitimize companies and governments that either actively engage or are complicit in human rights violations. It allows activists to stand up to human rights violations, and it gives marginalized people around the world a say in how the injustices they face might be addressed.