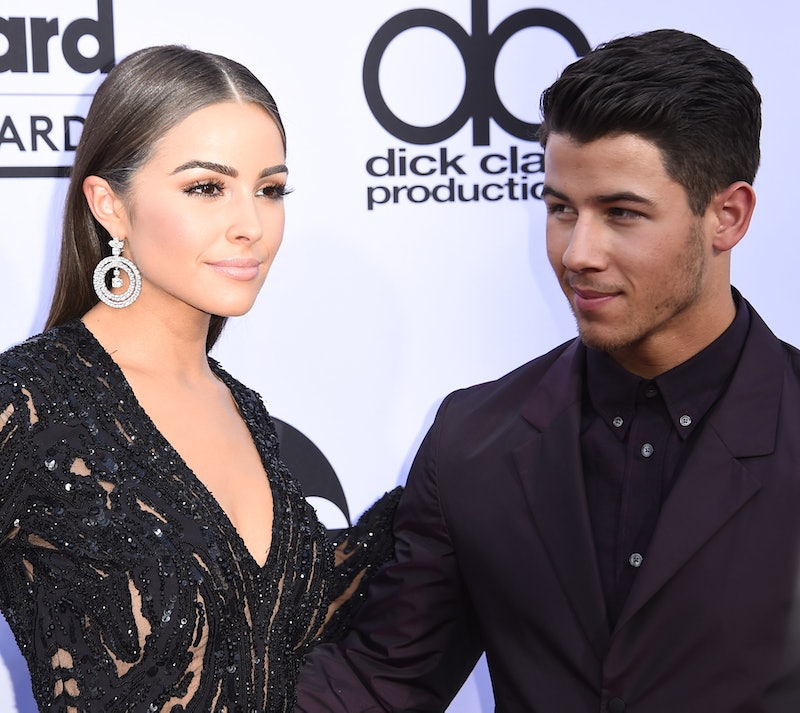 If you had told me when the Jonas Brothers were still together that after their breakup, Nick Jonas is the brother whose career I would follow the most closely, I would've laughed. And yet, here I am, obsessing over the minutiae of his new music, even wondering who Jonas' new song "Champagne Problems" is about. What a world, y'know? "Champagne Problems" is off Jonas' upcoming third studio album Last Year Was Complicated, set for release on June 10, and he's spoken on the record about the inspiration for the song. It has a bouncy melody and a catchy drum beat, but Jonas has been open about the fact that the subject matter is a little deeper and more mature than you might think, saying in a Reddit AMA:

"Champagne Problems" is a song about sharing a bottle of champagne with my now ex as we were breaking up to kind of close that chapter. It was sad and slightly sweet at the same time. It was a range of emotions and feelings and I think this song, although it sounds like a party song, actually has some of the deepest lyrics on the record.

So knowing that the song is about someone Nick Jonas dated, I'm sure you can guess my next question: who? There's no official confirmation from Jonas, but based on my research — *pushes glasses up her nose* — all signs point to Olivia Culpo. Culpo, as you probably remember, was the cellist and former Miss Universe winner whom Jonas began dating around August 2013, only for the relationship to break up amicably in June 2015 because of those old Hollywood reliables: distance and scheduling issues. Whomp whomp.

But on the bright side, just from that piece of information, the timing already works out; if Culpo and Jonas broke up in Summer 2015, that would give him plenty of time to pen a song inspired by her for an album due out Summer 2016. Plus, the fact that they ended things on good terms matches up with the vibe of the song, of sharing a last sweet moment with a partner as the relationship is ending. And finally, this would hardly be the first song that Nick Jonas had written about Olivia Culpo; his song "Jealous" was also about Culpo.

So yeah, I feel pretty confident saying that "Champagne Problems" is about the pageant winner and actress, and while it's a total bummer things didn't work out between them, when a breakup inspires a song this catchy — hey, things could be a lot worse.