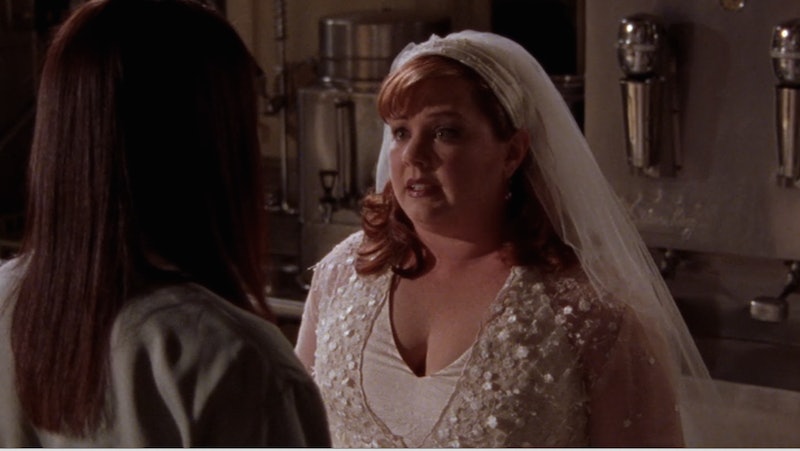 I'm still overwhelmed with feels after the latest Stars Hollow character RSVPed to this very special event. That's right, Melissa McCarthy confirmed she's joining the Gilmore Girls revival making the puzzle finally complete (you know, aside from the piece we lost forever when Edward Herrmann died). It's hard exactly to speculate what Sookie's involvement in the Gilmore Girls revival will be considering that, well, we really don't have a lot of definite plots to go by yet. But we do know there's going to be a Gilmore Girls wedding, and a wedding seems like just the thing to bring Stars Hollow's best chef into town.

Well, OK, we also know there's going to be a Stars Hollow play, but I don't remember Sookie ever having a bold love of musical theater. What I do remember is that Sookie and Rory dipped their toes into catering and party-planning. It doesn't matter who is getting married, what's a guarantee is that if it's a Stars Hollow local, they're gonna want a Sookie St. James wedding cake. We've seen her work wonders with that four tier s'mores masterpiece or the tremendous sugar-flower concoction she made for her own wedding day. Like, I'm sorry, you're not going to mess around and settle for Weston's Bakery (which, incidentally, is probably a Starbucks now after Fran's untimely passing, may she rest in peace).

So at a minimum, that would be Sookie's contribution to your garden variety Stars Hollow wedding that unites two townie side characters. But hey, what if it turns out that Lorelai and Luke are getting married in the revival? Realistically speaking it feels like they would have tied the knot by now, but it seems logical that we'd give the wedding to a primary character. Yet how would this work considering that Gilmore Girls has already seemingly filmed for the warmer months?

If Luke and Lorelai were to get re-engaged (is that a thing?) in the first Gilmore Girls episode (which, for this theory's sake, is spring), they could have the whole year to plan the wedding. This time around they decide to do a winter wedding, something that celebrates Lorelai's reverence of snow, and Sookie books a return trip home for the event. As Lorelai's best friend it feels right that she'd end up in bridal party, yet Rory would probably take the role of maid of honor. So Sookie would really just show up in the midst of the chaos, trying to make some crazy layer cake made from pop tart crumbles, and ultimately showing face as a bridesmaid. You know, it would be very Elizabeth Berkley in the Saved By The Bell wedding.

In short, there are a lot of "ifs" that would need to happen to blend Sookie into the Gilmore wedding this late in the game, and that's the circumstance that would work best. The sad truth is that because McCarthy probably only has time for a cameo due to her busy schedule. Still, it's better that nothing, and we're so glad that she finally checked the "will be attending" box.