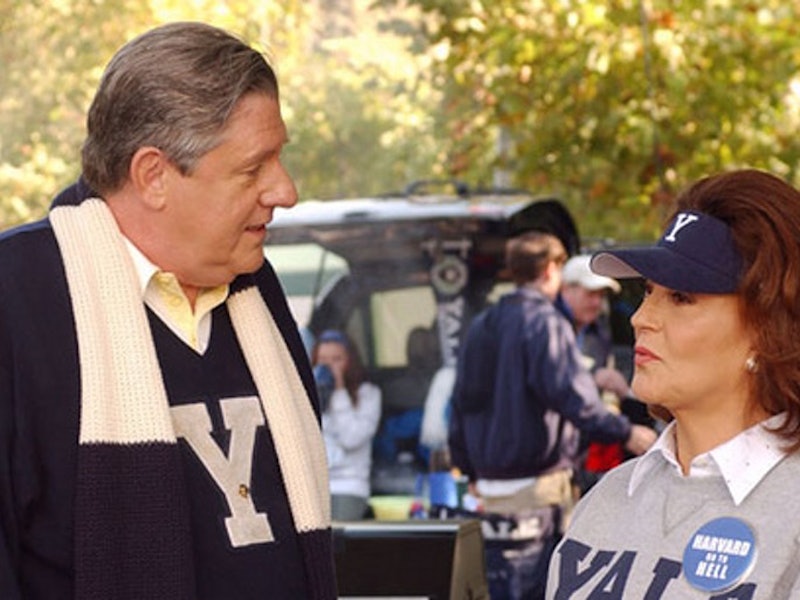 As exciting as it is to return to the world of the Gilmore Girls, knowing Richard Gilmore won't be waiting with a smile and a well-worn book to discuss with Rory breaks my heart. And, as much as the death of Edward Herrmann has devastated fans of the series, it is, of course, the Gilmore Girls cast that feels Herrmann's loss the most profoundly. In an interview with Entertainment Weekly, the cast opened up about how the loss of Herrmann has affected them and the revival.

On screen, Richard still looms large. According to Entertainment Weekly, a portrait of Richard now hangs in the home he and Emily shared for so many years. Richard's death will be felt throughout all four parts of the revival, as the Gilmore women try to find their way after their loss. "It's safe to say that the death of Richard Gilmore, the death of Ed Herrmann, looms large over everything," series creator Amy Sherman-Palladino told EW. "Dealing with the death of Richard is going to impact all of them, because when somebody close to you dies your whole life comes into a weird focus for a minute. Like, what direction am I walking?"

Actor Scott Patterson, who plays Luke and only ever shared a few scenes with Herrmann, is proud of the way Sherman-Palladino has chosen to honor the memory of both Herrmann and Richard. While talking about the scripts, Patterson told EW, "It’s a wonderful homage to him as a person and to his character as well. It’s nice to have him around."

As much as Richard's death will be a major part of the revival's story, the cast is still in mourning over Herrmann. For Lauren Graham and Kelly Bishop, the loss of Herrmann still feels deeply personal, especially now that they are once again shooting on sets where his presence is still felt. Bishop told EW that the lights went out briefly while the cast was shooting a scene in the Gilmore mansion, and both Graham and Bishop took it as a sign that Herrmann was with them. (Are you crying yet? If not, go grab some tissues and I'll wait.)

"I said, 'Ed was that you?'" Bishop told EW of the day the lights went out. "Lauren said, 'It was Ed.' I just feel like he’s here. Besides the script and the way we all feel about him, the giant portrait is all calling him to come to the set."

Just as the cast and crew left an empty chair for Herrmann on stage during the reunion at the 2015 ATX festival, the revival will leave an empty place for Herrmann as well. A man like Richard can never be replaced or forgotten. He may not be in the revival in person, but in spirit, Herrmann and Richard will of course be watching over the Gilmore women as they prepare for their next great adventure.