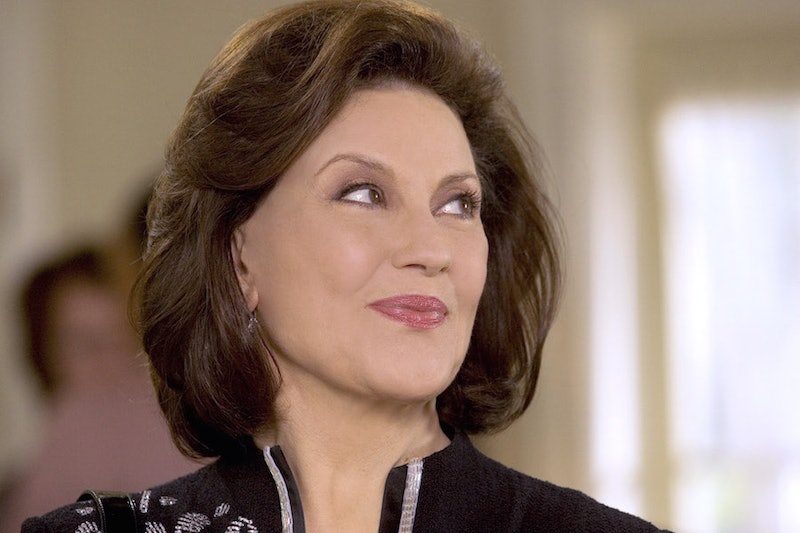 I feel like I should prepare you for what I am about to say, because I know a lot of you might not like this theory about the Gilmore Girls revival wedding. But, when I saw that a fan had taken a picture during her tour of the Gilmore Girls revival set of a prop marked “wedding,” I immediately started pouring over cast lists to figure out whose wedding it could be. Of course, the immediate theories came to mind: Luke and Lorelai, Rory and Jess, Rory and Logan, Rory and Dean. These are the obvious answers. But then, I actually looked at the prop — really looked at it — and the first name that came to mind was Emily Gilmore. I mean, just look at that weird chandelier centerpiece sort of thing. I don’t know what that thing is supposed to be, but I only know of one character in all of Stars Hollow who would elect to have that level of opulence at her wedding, and that person is Emily Gilmore.

Now, I of course realize that the idea of Emily Gilmore remarrying in the Gilmore Girls revival is a contentious one, bound to call my devotion as a Gilmore Girls fan into question, because how dare I suggest that Emily Gilmore would ever be able to get over Richard’s death so quickly — but I promise you my intentions are good. Because creator and writer Amy Sherman-Palladino has already confirmed in an exclusive interview with TV Line that the major catalyst in this revival will be Richard Gilmore’s death.

So if Richard’s death is the main event driving the action of this four-part series, then Emily Gilmore has to go somewhere over the course of those four episodes. She has to change somehow, or learn something, or experience some sort of epiphany that will either help her cope with her grief or settle into it more comfortably. This is Storytelling 101 — characters have to change. So, I’m pretty sure we can bank on a lot of change coming down the pipeline for Emily Gilmore.

Sure, a wedding might sound a little extreme. Meeting a man and remarrying him all in four episodes is a bit of a stretch. But, consider that the four episodes take place over a year. Each episode is titled with a different season, starting with “Winter,” which I’m assuming is when we will learn of Richard’s death and when Emily will be in the worst of her grief.

But if “Winter” is the depths of Emily’s grief, then wouldn’t it be safe to assume that “Spring” would bring some sort of new life for her character? “Summer,” too, might include a new romance for Emily, one that takes her out of the dark hole of her mourning and remind her of all there is to live for. Because it’s fairly common for widows and widowers to remarry within two years of their spouse’s death. In a 1996 study available on the US National Library of Medicine National Institutes of Health, it was discovered that 19 percent of widows were remarried two years after their spouse’s death. For men, the number was tripled, with 61 percent of widowers remarrying by the time the two-year anniversary of their partner’s death happened.

As attached as we may be to Emily and Richard forever, the fact of the matter is that dating after the death of a loved one is a perfectly healthy and natural thing. In fact, that same study concluded that remarrying after the loss of a spouse contributed to a greater psychological well-being in each of the test subjects.

I know, I know. Emily Gilmore getting married in the revival might not be a popular theory, but it’s one that is worth considering. Especially given the ornate nature of those wedding decorations and the very telling subtitles of the four episodes.