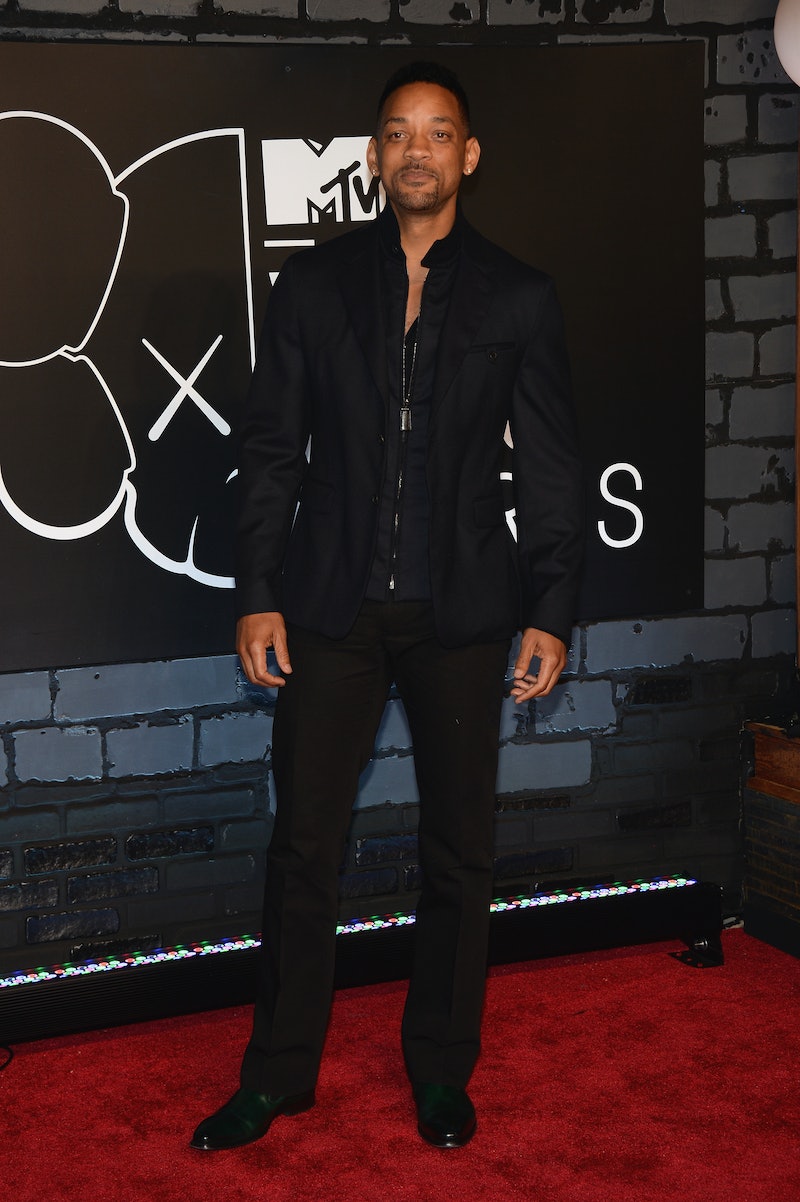 Will Smith might not have received an Oscar nod this year, but he did take home a nice golden popcorn statue from the 2016 MTV Movie Awards. Dwayne Johnson, who is co-hosting the awards show with Kevin Hart, announced in March that Smith would be receiving the Generation Award this year to celebrate his work. "When I first broke into Hollywood 15yrs ago, all I wanted to do was learn the business and put in the hard work to have a career like his. It's a real privilege to honor you my friend," Johnson wrote on Instagram. Will Smith received the Generation Award at the 2016 MTV Movie Awards after tributes from Queen Latifah, Halle Berry and The Lonely Island, who performed a tribute to Smith's work. But how does the Lonely Island fit in here — are Andy Samberg and Will Smith secretly friends, and have been holding out on us? Just think of all the wonderful spoofs we could have been enjoying this whole time.

There doesn't appear to be any public evidence that the duo are friends — just a song The Lonely Island did in 2009 called "Cool Guys Don't Look At Explosions," which name-checks Smith as one of the titular cool guys. I'd say that qualifies the group to be part of the celebration of Smith's career, yeah?

But aside from the welcome Lonely Island silliness, Smith gamely called the Generation Award "an old dude award," in his acceptance speech before reflecting on his long career. "I released my first record when I was 17, I'm 47 years old now. This June marks 30 years in the business for me," Smith said. From The Fresh Prince of Bel Air to Ali and Concussion, Smith has had an impactful career, to say the least. This year alone at the MTV Movie Awards, he was also nominated for Best Male Performance for Concussion and Best Kiss with Margot Robbie for Focus, and appeared alongside his Suicide Squad co-stars Jared Leto, Robbie and Cara Delevingne to present a new clip of their film.

In the past 20 years, Smith has earned 17 nominations and won five golden popcorns. And, as promised in his Generation Award speech, he has no intentions of stopping now. "I'm dedicated to being a light in this world. I want to help people. I want to be a light. I want to play roles that have dignity. There's so much suffering in this world, and I just want you to know I am dedicated 'til I die to light and to love," Smith said.

It was maybe a little strange to pair that seriousness with the silliness of the Lonely Island, but over the years, Smith has made us laugh and cry, left and right, capturing drama and comedy interchangeably. So maybe, just maybe, it was actually just right. You can watch the Lonely Island's tribute performance below.