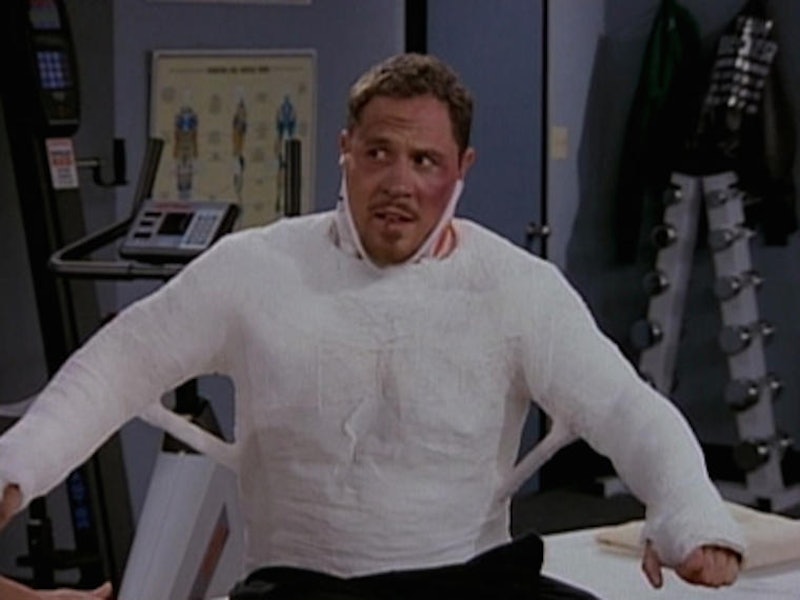 Over the course of Friends, Monica Geller — like any single gal in New York City — dated a variety of men. Though I’ll never forget Fun Bobby and Jean-Claude Van Damme, there was one boyfriend in particular that I've ruminated over since the shows been off air, and apparently I’m not the only one. Apparently, Jon Favreau — the actor and prolific director who played Pete Becker — still thinks about where his character would have ended up.

In an Ask Me Anything on Reddit, a fan wanted to know what happened to Pete after he and Monica broke up, and whether or not Pete won the Ultimate Fighting Championship — two questions that have been bugging us all since 1997. Favreau told the fan, "Pete Becker was a man of tremendous focus and conviction. He set his heart to being the Ultimate Fighting Champion and I have no doubt that he gave it his all. I'm only sorry that that chapter was never closed by the Friends writers because I'll always have to live with the uncertainty of what his fate held."

Same, Favreau. Same. But that doesn't mean we can't speculate. So in the spirit of that, where would Pete Becker from Friends have ended up? Let's think about this for a second.

He Bought The Moondance Diner

After he and Monica ended things, maybe Pete decided to buy the Moondance Diner. Because when you're a millionaire, why not, right? (Important to note, even though he's the owner, he still tips really well.)

He Opened Up His Own UFC Gym

Or, maybe the UFC dream didn't pan out for Pete. Maybe after becoming badly injured three more times, he finally decided to take it down a notch. Instead, he opened up a gym where UFC fighters could train. At least he can watch them from the sidelines now. And sob in the corner.

He Lost A Lot Of Money In The Market Crash

Or this. Poor Pete.

... But Then He Went To Work For Google

Yay Pete! Maybe after recovering from the terrible economic downfall, he decided to move to California and work in the higher-ups of Google. He most definitely also bought a Tesla at this time.

He Moved To Italy

THEN maybe, because he was able to retire early, Pete decided to follow his true passion: Italian pizza.

He still thinks about Monica from time to time and checks in with her on Facebook, but ultimately he's happy to see that she's happy. Even though it's not with him.