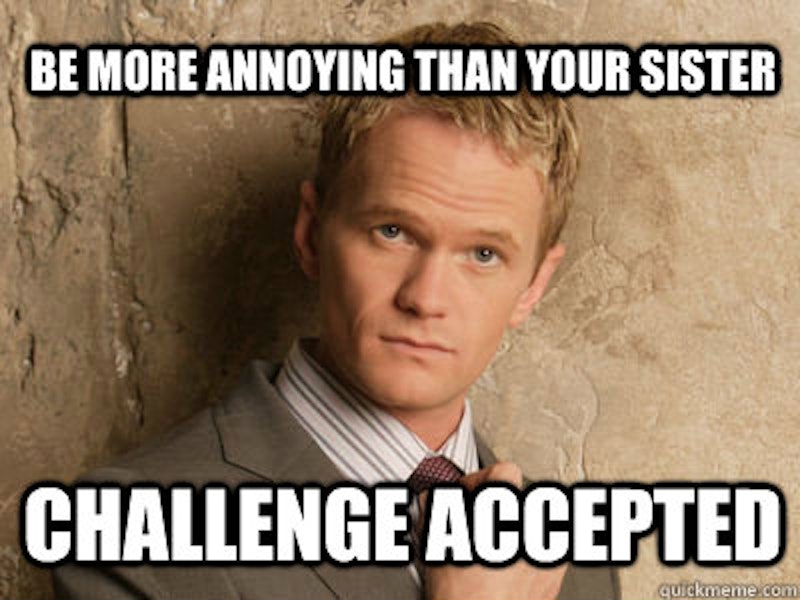 It's National Sibling Day, and you know what that means: Post after post celebrating loving sibling relationships, conveniently ignoring all the purple nurples and fistfights most siblings get into over the years. But if cutesy Facebook posts aren't your style, don't worry; spamming your sibling(s) with hilarious brother memes is a great way to show that you're thinking of them on National Sibling Day, without actually having to talk about your feelings. Perhaps more importantly, a true meme spam is a tried-and-true method of irritating someone from afar — so you can send your sibling some love and annoy them to no end when they wake up to 67 notifications on their phone. It's a win-win.

As someone who has a sister and a brother, I grew up with the best of both worlds: An older sister to introduce me to the cool older crowd in school, and a younger brother to embarrass every time we were in public together. One of my fondest memories is the horror in his eyes when I picked him up from a friend's house in purple eyeliner and rainbow-striped fingerless gloves. Of course, he got me back later by sticking his smelly foot in my face on the drive back, but that's just how sibling relationships roll. You're allowed to annoy the heck out of each other because, very deep down, you know you love each other. (This admission is going to cost me next time I see my brother, but I've made my peace with that fact.)

So let's celebrate National Sibling Day in the best way possible: With memes upon memes about brotherhood.

It's an endless cycle of one-upmanship.

And yet somehow he knows whenever you post an unflattering bar photo and immediately shows it to your parents. (To be fair, this goes both ways.)

He'll come check on you in a second, but sportsball comes first.

How do you not have an opinion on the Gilmore Girls revival? How?? There must have been a switch-up at the hospital.

It's a beautiful rite of passage.

The best thing about older siblings is shamelessly copying their actions — I mean, following in their footsteps.

Opening the wrong Christmas present is akin to a declaration of war.

Don't tell anyone, but I guess brothers are kinda cool.

More like this
The Case For A Hard Launch Summer
By Morgan Sullivan
Are Gemini & Scorpio Compatible In A Relationship?
By Kristine Fellizar
The Most Compatible Life Path Numbers, According To Numerologists
By Kristine Fellizar
What Is “Night Luxe?” Breaking Down TikTok’s New Aesthetic
By Courtney Young
Get Even More From Bustle — Sign Up For The Newsletter