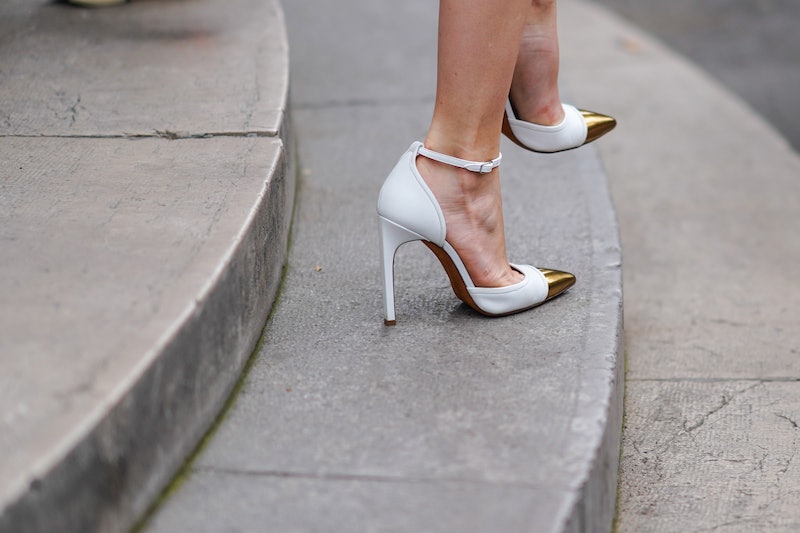 In our present society, there are a lot blatant of tropes, behaviors, and traditions that perpetuate rape culture: The idea of a sleeping beauty, dads who maintain the idea that women can be owned, and men not taking "no" for an answer, for example. But there are a also a lot of insidious, little ways rape culture is perpetuated, whether it's by language, policy, or societal norms. As small as these things may seem, though, they can be just as harmful as — if not worse than — the more overt ways our society perpetuates rape culture. Our actions matter, no matter how big or small they might be.

Of course, it's important to remember that while an action may be perpetuating rape culture, the person completing that action may not be totally aware of their role. For example, reading your children "Sleeping Beauty" might just be something you do without thinking about the implications. Perhaps your parents read it to you and you want to pass down the tale, or perhaps you read it to your children because it's a classic piece of literature. Behind all the shimmering fairy tale appeal, it's easy to miss that the story is about a dude having sex with an unconscious woman (yes, sex — in the original story, she wakes up after giving birth, not because a prince chastely kisses her). It romanticizes the idea of "saving" a woman, even if she hasn't given consent.

This is why being aware of all the little ways in which rape culture can manifest itself is crucial. Let's take a look at five different ways this kind of rhetoric affects our day-to-day lives, and why it's so harmful.

No matter how much someone might mean well, when someone tell a woman her clothes are "too revealing" or something similar, they're really saying, "You are a sexual object, but in this moment, you have to hide it." If you're going out for a job interview, for example, a friend might tell you your outfit shows too much cleavage, or at your college graduation, your parents may tell you to wear a longer skirt because you will be in countless family photos. Your friends and family most likely don't mean to perpetuate rape culture this way, but it's another way of saying, "If you dress like that, you don't deserve this thing" — or even, "If you dress like that, you deserve all the bad things that happen to you." Outfits are only "too revealing" because we've socially constructed them to be so, on top of the fact that we've also socially constructed women's bodies to be inherently sexual objects. Shaming a woman by telling her to hide her skin perpetuates those constructions, rather than dismantles them.

2. Romanticizing The Trope Of Men Chasing After Women

You've seen this scenario in any popular rom com: A man and a woman fall in love; there's a turning point and the girl leaves him; and then after some sort of revelation, the dude runs after her and "wins" her back. Our culture has taught us to view this narrative as desirable: How romantic! He's chasing after her because he loves her so much! What's happening in reality, though, is that even though the woman has explicitly left, the man still feels entitled to her. When someone persists in pursuing you even when you've told them you're not interested, it's irritating at best and violating at worst — and ultimately, it's an issue not only of entitlement, but also of consent.

It gets even worse when you flip the gender roles, too: If a man dumps and a woman and she runs after him, it's viewed not as romantic, but as desperate. Women are not taught to have ownership over men, but men are certainly taught that they can and should have ownership over women.

3. Complaining About "The Friend Zone"

Speaking of male entitlement, let's talk about "the friend zone." If you're unfamiliar with the term, "the friend zone" is an imaginary place where rejected men feel they must go to sulk because a woman has refused to date or have sex with them. As Everyday Feminism points out, people who believe themselves to be "sensitive, good-hearted people" complain about being put in the friend zone, but at the root of the issue, the complaint is against someone else's emotional and physical boundaries. Guilting someone for exercising their right to say "no" is a prime example of perpetuating rape culture, but it often goes unnoticed as such. The harm it does is twofold: One, it underlines the fact that women are socialized to be "polite," even at the expense of their own comfort or bodily autonomy; and two, it perpetuates male entitlement, which, no matter how subtle, is still very much present. The people complaining about "the friend zone" victimize themselves, while the women doing the turning down are shamed for saying "no."

4. Using The Word "Sex" Where "Rape" Should Be Used

Rape is not the same thing as sex. Period. If there is explicit consent from all parties involved, sex is sex. If there is not explicit consent, it's rape. Rape concerns itself with power, violence, and humiliation, while sex is about fun and pleasure for all parties involved. Switching ouot the word "rape" for "sex" perpetuates the idea that the two are interchangeable, when they very much aren't. While it seems like the semantics may not be such a big deal, they can have huge implications. Language is powerful, and naming specific actions for what they are matters.

I didn't think much of it when I was in 6th grade, but most dress codes across the country subtly perpetuate rape culture, body shaming, and sexism, not to mention anti-LGBTQ sentiment. For starters, it has been shown that dress codes disproportionately target women and girls. They're reprimanded for showing their shoulders, thighs, chests, and breasts, an action which assumes these areas of the body to be inherently sexual. News flash: They're not. No part of any body is inherently sexual, and socializing people from an early to believe that they are just perpetuates the issue. Plus, pulling girls out of class because they might be distracting boys values boys' education over girls' — it says, we can't have the girls distracting the boys from their lessons, but it's completely fine to prevent girls from learning in order to protect the boys.

Furthermore, the reason for dress codes' targeting of women and girls is frequently cited as an effort to "keep the boys from getting distracte." This reasoning places the onus on women to take responsibility for "male distraction," when the only people who should be held responsible for it are the men and boys in question. This sets the stage for victim blaming and rape apologism later on down the line: In the same way that it paints a boy being distracted by a girl's outfit as the girl's fault, it paints a man assaulting a woman wearing a short skirt as the woman's fault.

Rape culture wends its way through our everyday lives in more ways than you might expect. But becoming aware of it is the first step to changing it — and it's a battle worth fighting.

More like this
Beyoncé & Madonna’s “Break My Soul” Remix Honors A Group Of Black Icons
By Stephanie Topacio Long
We’ve All Had Bad Sex. Nona Willis Aronowitz Is Talking About It.
By Sophia Benoit
22 Movies On Netflix That Are Perfect For The Whole Family
By Bustle Editors
Bustle Newsletter: August 11, 2022
By Stephanie Talmadge
Get Even More From Bustle — Sign Up For The Newsletter