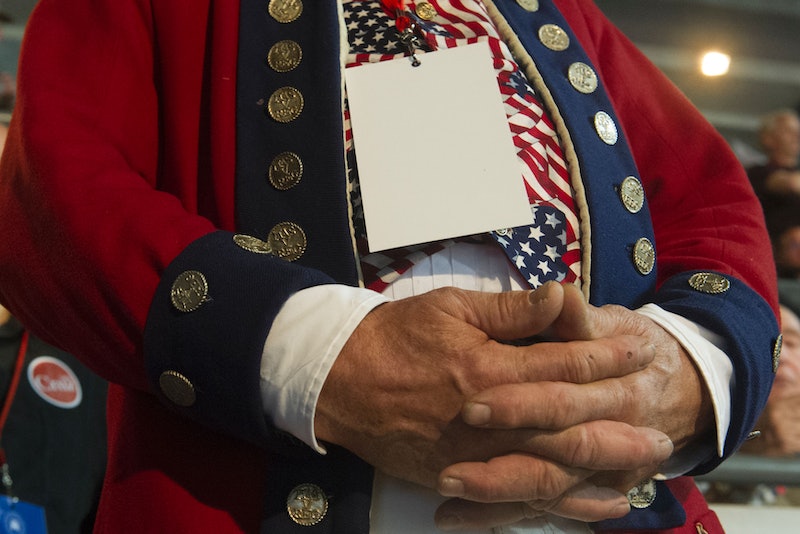 There's been some chatter lately about so-called "dark delegates" in the GOP primary, and whether they could swing the nomination to Donald Trump. You may be asking what a "dark delegate" is; you may also be asking why there are so many different kinds of delegates to begin with, and why America nominates candidates through such a labyrinthine process. If you're wondering what the difference is between them, keep on reading — we've got you covered.

Some of these are official designations. "PLEO delegate," for example, is a technical term that the Democratic Party uses in its rule books. Others, like "zombie delegates" and "faithless delegates," are more casual slang terms created by politicians and the media to help categorize delegates. Some delegates can fall into more than one category, and some can switch. For example, an at-large delegate might also be a bound delegate, and a bound delegate could become unbound midway through the convention.

In most election cycles, esoteric delegate rules don't matter, because one candidate wins a clear majority of delegates in the primaries, and the nominating convention is thus a formality. But this year, it's a real possibility that these distinctions between delegate types could determine the nominee. Without further ado, here is an exhaustive guide to all of the different kinds of delegates.

This refers to delegates who are required, by party rules, to vote for a specific candidate at the convention. Usually, the candidate to whom they're pledged is reflective of the vote in the state that they represent. A bound delegate is, in essence, an intermediary with no decision-making power of their own.

These are delegates who aren't obligated to vote for a certain candidate. They're free agents who can vote for whomever they want.

If the convention is contested, bound delegates will gradually become unbound on subsequent rounds of voting. When a particular delegate becomes unbound depends on the rules in their state.

These only exist in the Democratic Party. PLEO delegates, or superdelegates, are Democratic party leaders and elected officials who automatically become delegates at the convention and can vote for whomever they want. These delegates are a type of unbound delegate.

This stands for "Republican National Committee" delegates, and as you might expect, they only exist in the GOP. Every state branch of the GOP sends three party members to the convention, and they become RNC delegates.

In theory, RNC delegates are unbound and can vote for whomever they want. In 2016, though, the Republican Party mandated that RNC delegates vote in accordance with the state they represent.

This general term has a different meaning in each party. In the Democratic Party, pledged delegates are equivalent to bound delegates. They have to vote for a specific candidate.

In the Republican Party, a pledged delegate is any delegate who has expressed their personal support for a specific candidate. But this doesn't mean they're actually required to vote for that candidate. Pledged Republican delegates, in other words, can be bound or unbound.

This term also varies between parties. For Democrats, "unpledged delegates" simply refers to PLEO delegates/superdelegates. They are one and the same.

In the GOP, unpledged delegates are delegates who haven't expressed allegiance to one candidate or another. This is separate from the question of who they're allowed to vote for, though. An unpledged Republican delegate who's also unbound is a complete question mark at the national convention, while a delegate who is unbound but pledged has already indicated who they've decided to vote for.

This amusing name refers to delegates who are bound to vote for candidates who've dropped out of the race. If there are enough zombie delegates in any given year, they can — unintentionally and by no choice of their own (like any good zombie) — prevent one of the remaining candidates from winning 50 of the delegates and force a contested convention.

Whether or not a bound delegate becomes a zombie delegate depends on the rules in their state.

A dark delegate is a delegate whose vote is won not through primaries or caucuses, but through backroom negotiations and deal-making. Practically, only unbound delegates are in the position to become dark delegates.

This is a delegate who represents a single congressional district. They are allocated differently in each state and each party. They can be bound or unbound, pledged or unpledged.

An at-large delegate ostensibly represents the entire state. Like congressional district delegates, they can be bound or unbound.

The distinction between CD Delegates and at-large delegates is often irrelevant, but some states allocate them in different ways.

These are basically understudies who volunteer to fill in for a delegate who gets sick, is ruled ineligible or otherwise can't participate at the national convention.

Again, these distinctions usually don't matter, but they very well could this year. And besides, who doesn't get a kick out of the fact that there's actually something called a "zombie delegate?" That's just good fun, no matter which candidate you support.