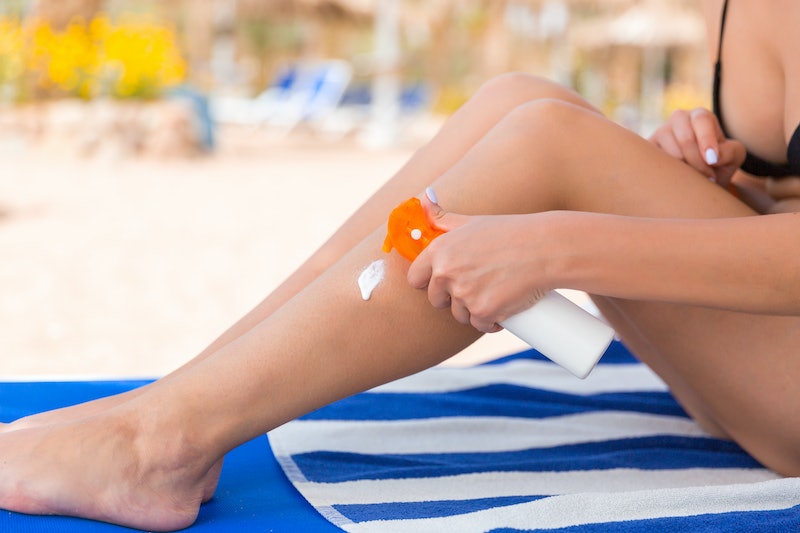 Google "sunscreen" and "toxic". I dare you. You'll likely be hit with an onslaught of organic blogs raising concerns about chemicals in sunscreens permeating the skin, causing cancer, interacting with your endocrine system, and setting off inflammation throughout your body. But the science behind the panic is more complex than it first appears. As the sun starts to feature more in our daily lives (hurrah spring!), it's important to read past the hype and delve into the real evidence about the potential evidence for toxicity in sunscreen ingredients.

First, let's outline the two differing types of sunscreen: absorbent and scattering. One, absorbent, starts a chemical reaction that "absorbs" UVA and UB rays, while the other, scattering, deflects or scatters them. (To check what kind yours is, you'll likely have to get up close and personal with the ingredients list, but if it mentions zinc in any capacity, like Invisible Zinc, it's scattering.) Both are associated with toxicity concerns because of specific ingredients, but as we'll see, it's not as straightforward as you may think. There's a lot of scientific argument about whether sunscreen of either kind is actually dangerous to humans, and many of the "toxic" worries have been drawn from studies that might not apply to us at all.

To get a clear answer, Bustle went hunting and spoke to dermatologist Dr. Barry Resnik to find out some of the facts about the controversial sunscreen ingredients, the positions of scientists and skin cancer research places, and what science has to say about them right now. Bear in mind, though, that new studies are happening all the time; in a month, a new study might declare that we should never put oxybenzone anywhere near us. Keep an ear out.

Why Some People Are Worried About Sunscreen

Let's get into the label "toxic". What does it actually mean? Ingredients in sunscreen may be bad for humans in large amounts, but does applying sunscreen give you enough of a dosage to be a problem?

WebMD probed into the issue, and found that experts have differing opinions of the two main sources of controversy, oxybenzone and retinal palmitate. (Retinal palmitate is a combination of vitamin A and palmitic acid, while oxybenzone is derived from benzophenone; both are used in "absorbing" sunscreens to create chemical creations.) Some advocate avoiding the ingredients until further research is done, but others point to current science that indicates both are, in sunscreen form, pretty low-risk. Both are commonly found in sunscreen, though it's pretty easy to find creams for sun protection without them.

Oxybenzone is thought to interact with the hormones of the body in sufficiently high doses. A study from 2011 cast a side-eye at the worries about oxybenzone; the scientists pointed out that the worries about it actually being harmful stemmed from a study in rats who were given a heap of oxybenzone in their food. Topical application, or smearing it onto the skin, in humans is another matter entirely; the scientists calculated that you'd need to slather inches of oxybenzone all over your body constantly for 36 years to get anywhere near the same levels of oxybenzone in the rats. They also noted that oxybenzone doesn't pop up in the blood plasma even if you've done it for days. But another study in 2004 found that traces of oxybenzone may be found in urine the day after applying it to the skin, though we're not entirely sure what that means; it may just be the body flushing it out.

The worry about retinal palmitate comes from a study that showed that, on exposure to UV light, it chemically produces free radicals, which are linked to cancer development. However, the Skin Cancer Foundation points out that the study in question was done on rats in a lab, not on human skin, was never published, and that humans have excellent ways of defusing free radicals: antioxidants. The Foundation actually says that "there is no scientific evidence that retinyl palmitate causes cancer in humans," and points out that topical retinoids in the same family of chemical are regularly prescribed by dermatologists without issues.

What About Mineral Sunscreens?

The big concern about the other type of sunscreen, the "scattering" kind (that would be sunscreen with zinc), comes from a particular subtype: "mineral" sunscreens that use nanoparticles (which are extremely small ) to look invisible on the skin. Ingredients in nanoparticle form in these sunscreens include zinc and titanium dioxide, and worries have been raised that their tininess may mean they can be absorbed into the skin and cause problems in the body. (We're talking seriously small, here: a nanoparticle is between 1 and 100 billionths of a meter).

However, the science about whether nanoparticles can actually get into the body is pretty mixed. Worries were raised about titanium dioxide after a study revealed that injecting it into mice caused inflammation, but you may have caught the snag with that: injecting something isn't the same as slathering it on your skin. (Zinc, meanwhile, may have a very poor environmental effect on coral and beach ecosystems.) A 2015 study of titanium dioxide and its absorption into skin found that it doesn't absorb into either intact or damaged (i.e. torn or wounded) skin; it just floats around on the surface. And the EU's Health & Safety Committee summed up the science and found that currently it doesn't seem that zinc nanoparticles absorb into the skin either.

"I do not believe there is any significant systemic absorption of any of the sunscreen ingredients, and have not had a concern about this issue," Dr. Barry Resnik, a dermatologist and director of the Resnik Institute, tells Bustle. "The most common problem is irritation in the eyes from sweat coming off skin coated with sunscreen, and contact allergy. However, contact allergy is much less common these days."

Of all the ingredients that may cause you concern, oxybenzone is the most likely culprit, but science at the moment tends to indicate that a bit of it in topical applications won't hurt. Otherwise, it seems the allegedly "risky" ingredients are all considered relatively safe. Just because something is unnatural or possibly problematic in high doses doesn't mean that it's automatically a bad thing to smear on your skin; make sure you always look into the science before you start worrying.

When it comes to sunscreen recommendations, Dr. Resnik says, "the benefits of sunscreens far outweigh the possible problems. SPF 30 with UVA and UVB protection is enough for most people. For people with sensitive skin, there are special formulations that try to be less irritating. For people with sun-sensitive skin conditions, higher SPFs are appropriate." If you'd like to stay away from oxybenzone, Popsugar has a good list of natural sunscreens that don't include it. If you want to go all-natural, though, beware: coconut oil is not an effective sunscreen, despite what you may have heard.

Most of all, it's important to apply sunscreen as recommended. Studies have linked high sunscreen use and melanoma frequency, and some experts think the answer to the link doesn't lie in the sunscreen itself, but in the fact that we aren't applying it properly. One expert told the Telegraph that sunscreen offers a "false sense of security;" once we're wearing it, we likely stay in the sun feeling utterly protected, and don't reapply it often enough or in the correct manner. Hint: it doesn't. The result? Increased burn rates and a bigger likelihood of melanomas. Not great.

More like this
Indiyah's New Boots Beauty Box Is For Heartbreakers Everywhere
By El Hunt
Wavy Hair Girlies Rejoice, Rhyme & Reason’s Wave Revival Regime Is Here
By Darshita Goyal
10 Shower Products That Have Gained Fame On TikTok
By Audrey Noble
The 9 Best Vagina Hygiene Products, According To ShowerTok
By Carolyn Steber
Get Even More From Bustle — Sign Up For The Newsletter
From hair trends to relationship advice, our daily newsletter has everything you need to sound like a person who’s on TikTok, even if you aren’t.