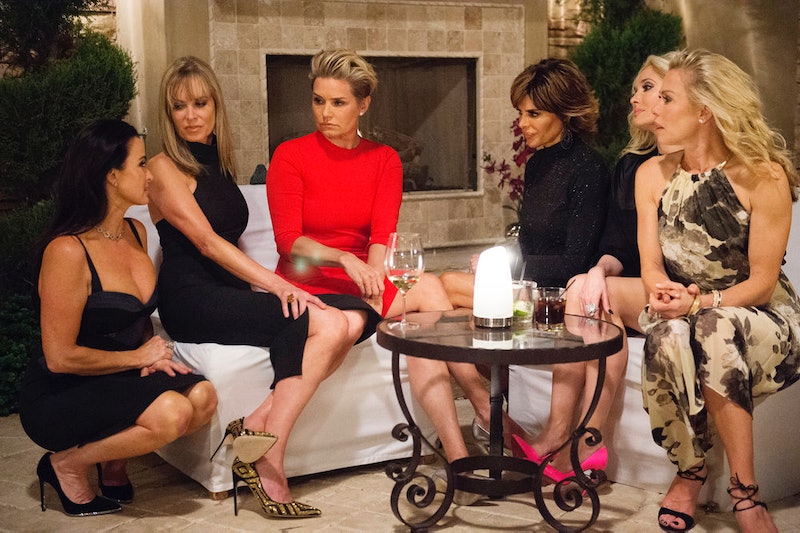 The Real Housewives of Beverly Hills Season 6 hasn't ended yet, but it's never too early to look forward into the next season. When will RHOBH Season 7 premiere? I mean, it's a little early to predict exactly what Bravo's schedule is going to be, so an exact date hasn't been announced yet. In fact, the show has yet to be renewed as of yet. But, RHOBH is always in the beginning of the year, so I'd except a possible Season 7 in early 2017. If the two brand new Housewives franchises, Real Housewives of Potomac and Real Housewives of Dallas, both make it to Season 2, the schedule might wind up shifting slightly, but it shouldn't be a problem to find out when the RHOBH premiere is as it gets closer, since Bravo always advertises their shows for months before they premiere.

The seventh season of Real Housewives of Beverly Hills might boast some other changes too. The cast has grown over the past few seasons, but there might be even more changes ahead. And, the rest of the cast could be a little freshened up as well. Every season needs at least one new cast member, and while I don't know the who's who of Beverly Hills, I do have a good idea of the odds of which Housewives are due to return to their franchise.

If Lisa leaves RHOBH, it will be purely a power play, because as the only member of the cast with her own spinoff (Vanderpump Rules), and as the undisputed queen of Beverly Hills (and, probably, the world). There's absolutely no way Bravo would kick her out.

As the resident second banana on the show, Kyle is a huge part of RHOBH's DNA. You need a resident gossip and occasional sh*t-stirrer to make things happen on this show. Kyle should have a standing order with the producers to come back for as many seasons that she wants.

But, honestly, Kim Richards, Kyle's sister, does not seem in the right mindset to appear on one of these shows right now. Or any reality show. But according to Radar Online, Yolanda wants Kim to return for Season 7.

Lisa's intense response to Yolanda's illness is a little weird, and she should probably relax about it and look for a new storyline if she's invited back.

Do you really need two soap opera veterans on one Housewives franchise? When one of them is Lisa Rinna and the other one is voice of reason like Eileen, why not? If she's willing to return, I think Eileen should be invited back for Season 7.

She's only been on a few episodes, but she's fun and fabulous and brings a little bit of Las Vegas to Beverly Hills and I love that. Personally, I'd vote for her to come back.

Kathryn may have an interesting connection to the O.J. Simpson case and have a very handsome husband, but she hasn't really set the show on fire.

Yolanda has been suffering from Lyme disease and now is going through a divorce. If she wants to fall back to part-time status next season, I think it might be for the best, since she simply doesn't seem to have the time or energy to do a lot of activities together. But, she does have two bona fide supermodels as kids, so maybe Yolanda deserves her own spinoff as well.

No, she's not officially in the cast, though she has made several appearances since she left the cast full time years ago. Once you host a Dinner Party from Hell, you automatically become a legend, and I'm hoping Camille drops into every season of RHOBH from here on out.

However the Real Housewives of Beverly Hills changes after Season 6, if and if it returns in early 2017 for Season 7, it could be with a cast that looks anywhere from little different to totally unrecognizable.