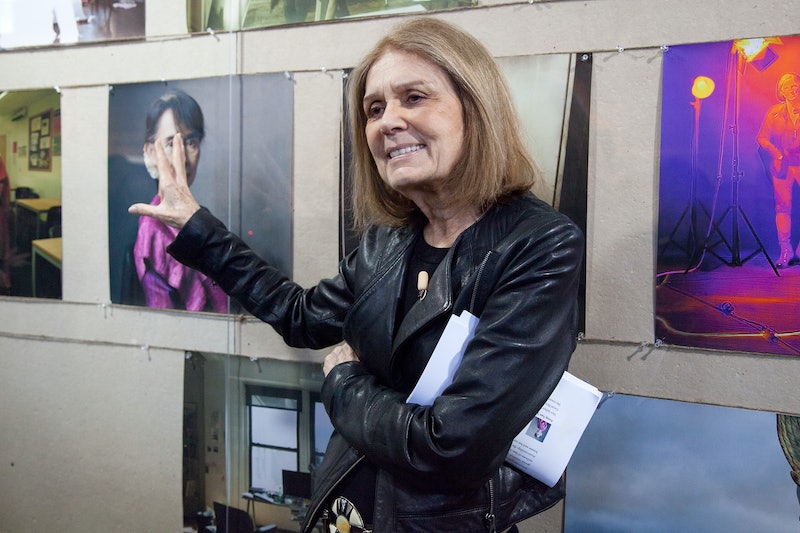 Journalist, activist, and feminist are the terms most people generally associate with beloved icon Gloria Steinem. But on April 19, when Steinem takes her turn curating films as TCM's celebrity guest programmer, "movie buff" will officially become a term we can add to the list. Steinem's film selections from the TCM library run the gamut from the quiet chaos of 1961's socially radical (at the time) A Taste Of Honey to the story of the brazen Holly Golightly in Breakfast At Tiffany's to the political and highly impactful 1969 film Z. But one thing connects them all: Each film is, in its own way, an agent of change.

"[Breakfast At Tiffany's] had such an impact on me," she says, as she and I discuss her picks in the green room following the taping of her conversation with TCM's Robert Osborne, pieces of which will air between each of Steinem's film selections on April 19. "[Holly Golightly] does what she is not supposed to as a female human being and voyages out into the world, and I think that has huge appeal to any of us who are in some part of restriction, as females. She dares to live a free life," she adds.

Steinem is referring, of course, to the iconic character played by Audrey Hepburn, whose visage still adorns many a young woman's college dorm room wall. Holly is a young woman with no job, who survives by socializing with wealthy men who shower her with, well, their wealth. In essence, she is a call girl, getting what she wants in life by using men and sex. There are a lot of criticisms to be had at Holly's expense (she's almost willfully ignorant sometimes and it's rather clear that she's a character constructed from a male point of view), but her character, was in a sense, the first in a long line of mainstream sexually liberated women. (There's even a book by historian Sam Wasson that hails Holly as the "dawn of the modern woman.") This was a huge deal, and part of the reason Steinem says she was drawn to the film.

"I didn’t realize when I saw it, it was one of the first movies in which a woman was sexually free and not punished for it ... and this was an era in which women’s magazines had a formula: You could not have sex outside of marriage and not come to a bad end, even in fiction," says Steinem.

"In a way, media in general, and film in particular, tell us what is normal even if it isn’t."

With the success of Breakfast At Tiffany's, the door to the idea of a woman who is sexually free outside of the bonds of matrimony was opened to a wide, film-going audience. More importantly, this film came out right at the start of the sexual revolution of the '60s and '70s, when women's sexuality was not only beginning to be acknowledged on a wider scale, but even celebrated thanks in great part to the introduction and approval of the birth control pill and now ubiquitous texts like 1963's The Feminine Mystique.

That juxtaposition is no coincidence, if you ask Steinem.

"In a way, media in general, and film in particular, tell us what is normal even if it isn’t. They normalize ideas and the way you look and the kind of life you lead," she says. "Look, we’ve been sitting around a campfire telling stories for hundreds of thousands years. This is the way we communicate, this is the way we understand each other. If you tell me a fact or a statistic, I will make up a story as to why it’s true. It’s totally about narrative."

That's why it's so impactful to see women's stories on film. The film industry — which has recently become a battleground for issues such as equal pay (thanks in large part to outspoken women like Jennifer Lawrence) and equal hiring practices (which are so bad in Hollywood that the government has begun to intervene) — can act as tool for change when more diverse points of view and previously untold stories are represented.

As Steinem puts it, "if we don’t have everybody sitting around the campfire, everybody loses."

Turning that concept on Breakfast At Tiffany's, the pattern of fitting information, such as the truth of women's sexuality, into a narrative in order to make an impact seems rather obvious. The film hit theaters nationwide in 1961, years after Alfred Kinsey was studying and publicizing women's sexuality, with 1953's Sexual Behavior In The Human Female. Kinsey's findings about women's sexuality were met, on a large scale, with derision and, in some cases, disgust. Less than a decade later, the tale of sexually liberated Holly Golightly went on to make $14 million, win two Academy Awards (it was nominated for five), and become a beloved classic that still inspires young women to this day.

"What was being normalized [before Breakfast At Tiffany's], even if it wasn’t always being lived, was very, very far from any kind of freedom. [Holly] kind of stands for freedom," says Steinem.

And to deny that freedom's impact throughout film and television history is nearly impossible. Steinem points to other projects that have pushed the conversation forward even further, including Sex And The City, which Steinem praises as "a step forward" in bringing real female friendships, instead of competition and romantic rivalry among women, to the forefront of film and television. (Don't worry, she knows the series had its drawbacks, too: "Now, were the shoes realistic? No," she jokes.)

Steinem also points out another incredibly liberating project, Amy Schumer's raunchy rom-com, Trainwreck, as a film that is moving that campfire narrative forward at a rapid pace. "Just speaking personally, it’s the first time in my life that I remember sitting in a movie that was very sexual — over-the-line sexual — and I wasn’t worried about being humiliated, eviscerated, or murdered ... because it was her movie," says Steinem.

Trainwreck features some of the dirtiest jokes and situational comedy in recent memory, but the fact that Schumer is the driving force changes the conversation so that it doesn't feel exploitative. It feels like, as women, we are a part of this raunchy story. We're in on the joke. We're telling the campfire story. What films like Trainwreck and Breakfast At Tiffany's have in common is their ability to bring new perspectives to society at large.

It's only a matter of time before that small spark grows into a blaze that heats the world, and Steinem's hopes can be realized: "...we have to think of ourselves as human beings around a campfire and stop dividing ourselves by things we invented: gender, race, class, caste. And just understand we all have a story and we can all learn from each other."