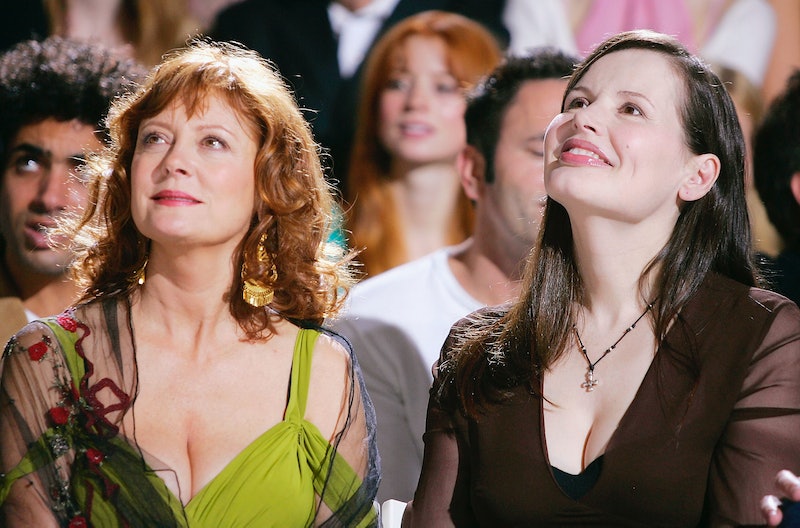 Thelma and Louise are back... kinda. In honor of the film's burgeoning 25 year anniversary, Harper's Bazaar decided to have actresses Geena Davis and Susan Sarandon discuss the impact of the film. Particularly interesting, they got to talking about where Thelma and Louise would be today... you know, with the condition that they didn't plummet to their deaths by driving off a cliff. But here's the thing, though: they did plummet to their deaths by driving off a cliff. That is canon. That also may or may not be the Grand Canyon, which wouldn't make for a shallow drop. So these imagined futures are pretty much null and void, unless they did manage to escape the claws of the law. But how?

Sarandon took the wheel on this one. "Well, Thelma's definitely not with her husband anymore," she said. "One would only hope she found Brad [Pitt] again." One could only hope. She then added that, "Maybe Louise became a lesbian. That would be fabulous. Maybe she continued her trip and ended up running an Airbnb." I'm not 100 percent certain that sexuality works that way, but these seem like happy endings for the feminist icons and inventors of the selfie.

Since we don't technically see their horrible, horrible deaths because you get a serene fade to white, is there a vague possibility that they maybe, I don't know, actually escape and lead validating futures? I mean, it totally could've worked if...

Louise Pulls Out A Hidden Headscarf And They Parachute To Safety

Everyone's hair is a hot mess after it's all over, but that's the worst of it.

The Car Is Going So Fast It Basically Like, Jets Them To Safety

So, honestly, Thelma and Louise were able to call the authorities' bluff on that one.

Another Helicopter Swoops In And It's J.D. And He's Super Reformed And Totes Sorry About Stealing Thelma's Money And He Rescues Them

Yeah, I mean, he was being held accountable for turning them to the dark side last time we checked in, so, unless he got really guilty all of a sudden, I doubt this would suddenly become a rom-com.

Then they crash into the Whomping Willow, and everything is terrible again.

In this one theory, we're assuming that Thelma is part bird, and has been part bird the entire time.

The Car Ripped The Fabric Of The Space Time Continuum So They're Actually Fine And Living It Up In The Old West, Back To The Future Style

Eh, but then that AirBnb thing doesn't work out.

The Car Does Actually Fall Dramatically Yet The Two Are Miraculously Unscathed Due To The Magic Of Air Bags...?

Yeah, I guess it's safe to say that Thelma and Louise probably didn't make it, but, hey, 25 years later they certainly still live on in our hearts.