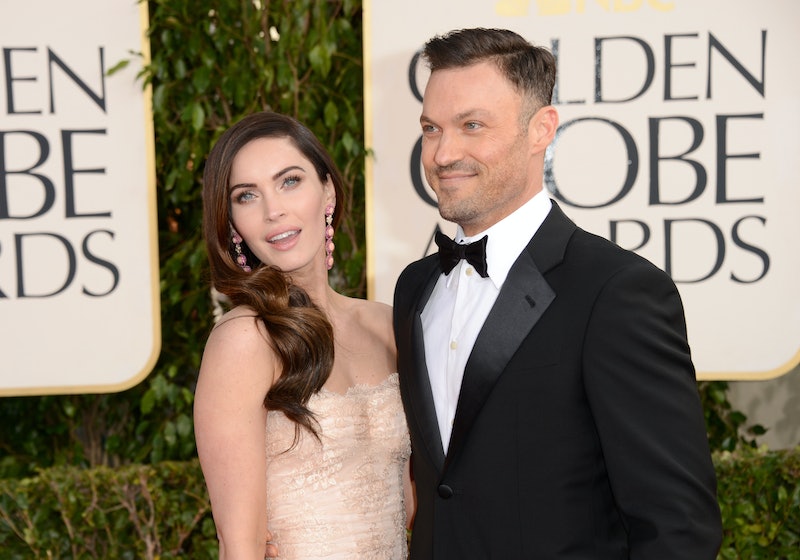 Well, color me shocked. The last time there was any big news about Megan Fox's personal life was when she reportedly filed for divorce from her husband, Brian Austin Green, back in August 2015. But now, multiple outlets are reporting that Fox is pregnant with her third child! And, on Tuesday afternoon Fox commented on the pregnancy reports in her own way with an Instagram post showing photos of herself with three different actors with the caption, "#notthefather." In light of this news, I could't help but wonder if Megan Fox and Brian Austin Green were back together?

Bustle has reached out to Fox's rep on the pregnancy reports and to her rep and Green's for comment on whether they are back together, but have not yet received a response.

While fans haven't yet heard from Green or Fox, a source claimed to E! News that their divorce "will likely be put on hold for a while — or forever. This pregnancy was not planned, but when they found out they were extremely happy." The insider added, "They are working really hard to be together and one unit — not only for their children, but also for each other. They are looking forward for the arrival of their new baby."

Fox and Green reportedly filed for divorce in August 2015 after being in a relationship for 11 years, but according to E! News, the divorce is still pending. Since the news of their divorce came out, though, Green and Fox have seemed to remain friends and have been seen out and about in Los Angeles, with and without their two children, Bodhi and Noah.

With the evidence of their amicable relationship as of late and the fact that neither Green nor Fox have been confirmed to be dating anyone else, I wouldn't rule out the possibility that they are giving their relationship another chance. Back in 2014, Fox opened up to Men's Health about her relationship with Green, and it sounded like they were meant to be. She said,

You can’t live in a fantasyland and think that everything’s going to be perfect all the time. You will go through phases where you’re just not getting along. You’re not communicating well. That’s going to happen, and it’s going to feel impossible to you sometimes. It might not even make sense to you sometimes... You have two people, separate beings, trying to share one life together... Brian is my soulmate. I happen to believe that. He’s definitely meant to be the father of my children. That makes it easier for me to work through things, because I always see the spiritual side of things. I look at the end game.

So, could this be a clue that they would eventually reconcile? One thing is certain, these two truly care for each other and the children they have together, so I know they will make the decisions and live their life the way that is best for them, whether they're officially back on or not.