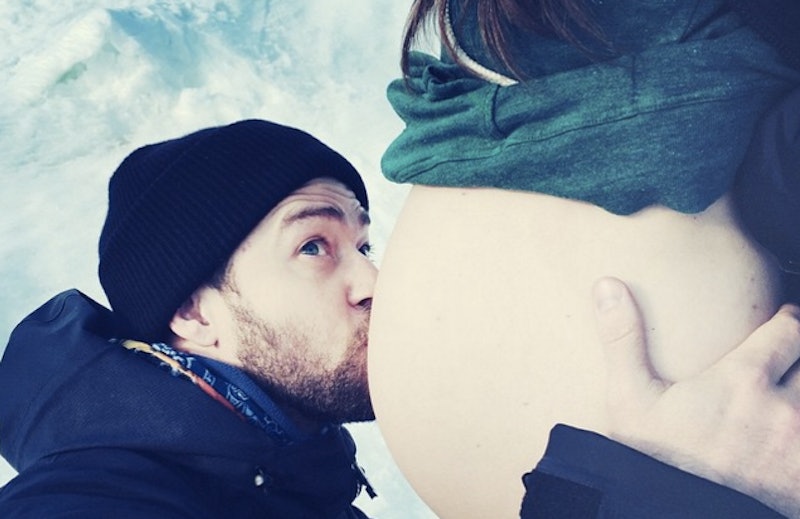 When a woman was pregnant in the days before social media, she more than likely would tell family and friends about her exciting news via phone call, in-person meeting, or perhaps an email. That is lovely and all, but the advent of the Internet has made it so there are plenty of ways to tell hundreds (if not thousands) of people in your social circle that you're expecting. Expectant parents definitely get creative when it comes to crafting a perfect pregnancy announcement these days, so it makes sense that celebrities have found ways to up the ante when it comes to announcing that they are, in fact, expecting a baby... and it's just so precious.

Amid constant tabloid speculation about their bodies, relationship status, and desire to be a mom, celebrities — just like normal people — have also found creative and adorable ways to announce their pregnancies on their own terms. Some prefer to remain quiet about their news for as long as possible, but others do everything from snapping a shot of an actual bun in the oven to announcing their news on stage at the MTV Video Music Awards (hey, Beyoncé!) and these celebrity pregnancy announcements are the cutest of the cute.

Teigen was open about her struggle to conceive, which made it all the sweeter when Teigen announced her pregnancy on Instagram in October 2015.

In 2012, the actor announced her second pregnancy with husband Marc Silverstein in a very casual, nonchalant tweet, which was hilarious and succinct.

Sims shared a photo of a fortune cookie on her website and announced her first pregnancy by telling a sweet story of how she told her husband he was going to be a dad. She wrote,

I hijacked the fortune cookie and typed a new message so that when he opened his cookie at the end of the meal, he found out he was going to be a daddy. You can only imagine how nervous I was during the entire meal (I think I ate a total of two bites…), but the look of surprise and pure joy on his face was priceless.

The potential First Daughter shared an adorable post to Facebook to announce she was expecting her third child with husband Jared Kushner, and even had a video outtake showing that her son, Joseph, was less-than-cooperative when trying to capture the moment on film. Too cute!

Who could forget when Bey announced she was pregnant with the future Blue Ivy Carter at the 2011 VMAs at the end of her electric performance of "Love On Top?!"

Keibler took to Instagram to share what she'd been cooking in 2014, playing on the popular phrase "bun in the oven."

The proud papa-to-be shared the news of the future North West on stage (where else?!) during a concert in Atlantic City, NJ. He sang, "God brought us a whole new plan, baby. 'Cause now you're having my baby," then asked the crowd, "Can we make some noise for my baby mama right quick?" telling thousands of concert goers about their exciting new arrival in one fell swoop. Would you expect any less from Mr. West, though?

The fashion mogul had the most fitting Halloween costume ever back in 2011, dressing as none other than a mummy to announce that she was about to be one in real life. She announced her pregnancy on her website and tweeted the link, which is simply how it's done these days. Simpson followed up her first pregnancy announcement with another on Christmas in 2012, tweeting a photo of her daughter Maxwell Drew clad in candy cane pajamas and the words "big sis" written in the sand.

Timberlake was understandably excited to announce his pending bundle of joy on his birthday back in 2015. A special shout out to his awesome use of hashtags here, also.

In the most millennial celebrity pregnancy announcement ever, Cavallari announced she and Cutler were expecting their third child with a photo on her app. Cavallari wrote, "We’re at it again! Thrilled to announce baby number 3 is on the way! The Cutler crew just keeps on growin’!" which captioned a photo of her making a heart with her fingers on her belly.

The actor took to Instagram to announce she had a new sequel in the works... her second baby with husband Kyle Newman. Her son, James Knight, was the adorable star of the show. So perfect.

Rowland let the world know she was expecting her first son with husband Tim Witherspoon by way of matching daddy-son Air Jordans, simultaneously announcing her future baby already had the most swagger ... umm... ever.

Underwood put her pups Ace and Penny to work on Labor Day in 2014 when they announced Underwood was expecting her first child with husband Mike Fisher. So sweet.

In what has to be the best use of big balloons ever, Dyrdek announced he and his wife Bryiana were expecting their first child in early 2016, proudly showing off a sonogram photo.

Playing on the infamous Saturday Night Live skit involving "mom jeans," Fedotowsky donned a pair of her very own "mom jeans" to announce her first pregnancy with her husband Kevin Manno. LOL.

The Mean Girls star let the world know that her dog, Kitty, wasn't as excited as she and her husband Dave Nehdar were that they were expecting their first child in February 2016, but I'm sure Kitty will come around eventually. That face is just perfect. Poor Kitty!

Take note, parents-to-be... these are just some of the ways you can let the world know you're expecting a little one!