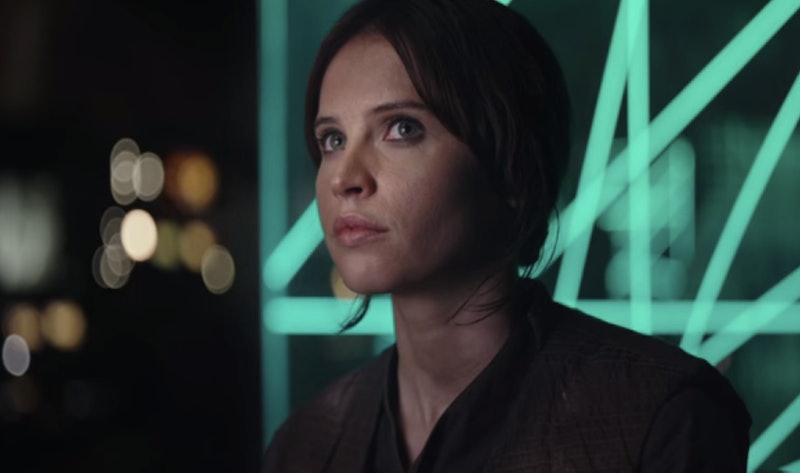 Despite only being around 90 seconds longer, the teaser trailer for Rogue One: A Star Wars Story has caused fans of the series to theorize about the new movie's characters. Most of the theories so far revolve around the main character in the trailer, Jyn Erso, who The Guardian describes as "a battling, maverick space scoundrel, perhaps in the mould of Han Solo, who is recruited by the Rebel Alliance to help steal the plans for the first Death Star." While the trailer has us all excited at the prospect of only having to wait until December 2016 for our next Star Wars fix, it only hints at what the new film is about. For a plethora of reasons, fans have largely speculated that Jyn Erso is Rey's mother. But what other Jyn and Rey theories about Rogue One are there? Could Jyn and Rey be related?

Daisy Ridley has been the first to shoot down rumors that Jyn is definitely Rey's mother. At the MTV Movie Awards, Ridley said, “I’m not being funny you guys, but just because she’s white and got brown hair… it doesn’t mean she’s my mom." The actor's hilarious response might just be a marketing ploy to throw us all off the scent, or perhaps Ridley knows something we don't?

Radio Times collated several sources that claimed Jyn Erso was in fact Rey's mom, and said, "It's a narrative that isn't a million miles away from that of our Rey, and if you do the maths (add about 16 or 17 years or so, to allow for the roughly three years between A New Hope and Empire Strikes Back, and the 11 or so years between Return of The Jedi and Rey's birth) there's a very real possibility that it could be true." While the theory that Radio Times pose is still only speculation, it's interesting that several sources believe that the timeline checks out for Rey being Jyn's daughter.

If Jyn is Rey's mom, does that mean that Luke Skywalker is her dad? Jenn Rose at Romper doesn't think so. Rose said, "I can see Jyn being the mom, but I can't imagine Luke breaking the Jedi code, abandoning his kid, or having a one night stand, so that's out. To be honest, I can't even imagine Luke having sex at all. I think of him like his actions figures; all smooth and blank down there. Next!" I couldn't agree more with this rationale, and, having seen the Rogue One trailer, it's tough to imagine Felicity Jones's Jyn and Mark Hamill's Luke hooking up at any age.

Emily Chambers at Pajiba thinks the implication that Jyn is Rey's mother is a sexist notion, one which undercuts the awesomeness of both women. Chambers said, "Female characters don’t need to constantly be explained any more than male characters. Why did Han learn how to become a smart-ass, smuggling pilot? Because he wanted to. Why did Luke want to get off of Tatooine? Because moisture farming sucks. Why could Rey handle herself throughout the movie? Because dying on a strange planet as an abandoned child sucks, and our girl was too good for that." Chambers makes a great point here. Why is everyone so desperate to explain where Rey's amazing abilities come from, but they're so much less bothered to know how Finn got his? To instantly tie Jyn to Rey seems to insinuate that neither character can merely exist or, indeed, play the lead in a Star Wars movie on their own.

Whether the characters are related or not, the important thing to remember is that both Felicity Jones and Daisy Ridley got cast in a main role in one of the biggest movie franchises of all time, and both actors can more than live up to the challenge therein. While we'll all have to wait until Rogue One comes out in December 2016 to find out if Rey and Jyn are in fact related, the theories are likely to continue for the rest of time. Is Jyn Rey's mother? Watch the trailer for Rogue One: A Star Wars Story now and decide for yourself.