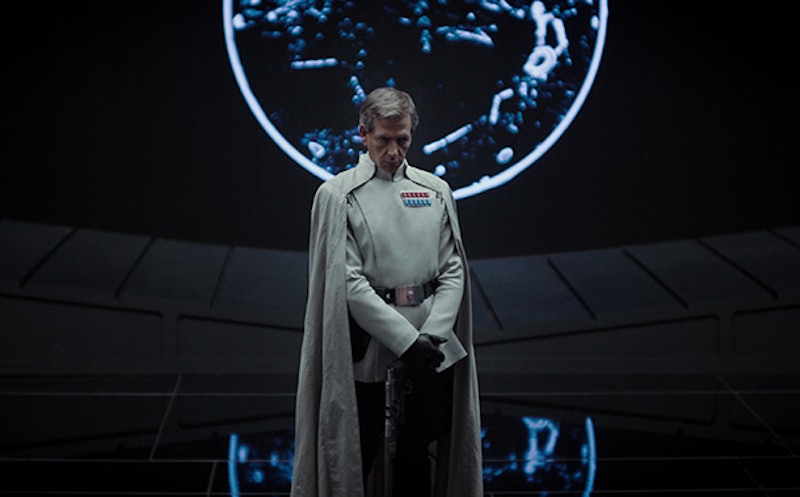 If you're just now joining us from the rock you've been living under, then let me be the first to break the news that a new Star Wars trailer debuted this Thursday. No, not for the still-untitled Episode VIII; that will have to wait another year or so. Rather, it's the official teaser for Rogue One: A Star Wars Story , the first entry in a series of standalone anthology films that will be released in the off-years between installments of the main series. If you're just tuning in with us, you may be wondering: How does Rogue One connect to The Force Awakens , exactly?

Well, it doesn't; not directly, anyway. Rogue One actually takes place between the events of the original trilogy and the prequel trilogy — sometime after Revenge of the Sith but before A New Hope — and follows the group of Rebel spies who managed to steal the plans for the Empire's fearsome Death Star, which were used to destroy the über-weapon in Episode IV. But just because Rogue One takes place about 30-40 years before The Force Awakens doesn't mean there won't be any links between the two films.

Here are just a handful of TFA connections, references, or easter eggs that might exist in Rogue One, based on the trailer.

The identity of Rey's absentee parents, who abandoned her on Jakku when she was only a small child, was a lingering mystery of TFA. Could the Rogue One teaser have given us our answer? Actresses Daisy Ridley and Felicity Jones are both British, both brunette, and they share a striking physical resemblance. And Jones is a perfect age to grow up and give birth to a daughter who would be 19 years old a few decades later.

First of all, that cape is epic, and I want one for Halloween / everyday use. Now that that's covered, we can talk about the Grand Admiral, played by Bloodline actor Ben Mendelsohn. He's clearly the big bad villain of this film, in charge of the Death Star during its construction. So what if he was on the spherical base when it exploded during A New Hope … but somehow survived, scarred and unrecognizable, and later adopted the title of Supreme Leader Snoke to exact revenge on the rebels who destroyed the Empire?

If Mendelsohn's Grand Admiral doesn't become a character in TFA, is it possible that he's related to one? Could Domhnall Gleeson's General Hux be the Grand Admiral's nephew or something? Hux does seem surprisingly young to have been put in charge of Starkiller Base. Perhaps he secured the post thanks to his legacy as the relative of the original Death Star's commander?

Although the teaser gave us glimpses of plenty of Rogue One's sprawling cast, there were a couple of glaring absences — most notably Riz Ahmed (Nightcrawler) and Mads Mikkelsen (Hannibal). Speaking of Mikkelsen, could he possibly be playing a younger version of Lor San Tekka, the character played by Max von Sydow in TFA? (He's the one who gave Poe the map to Luke's location early in the film before being murdered by Kylo Ren.) Both actors are Scandinavian (Mikkelsen is Danish, von Sydow is Swedish) and they're 36 years apart in age — perfect for the timeline of the two films.

Prior to TFA, we'd only ever seen Stormtroopers wearing standard-issue white. Then Episode VII gave us the Chrome-plated Captain Phasma, and the teaser for Rogue One also introduced us to some tan-colored soldiers, as well as the imposing iron-gray one seen above. Will Rogue One finally detail the hierarchy of all these different Stormtroopers?

Although we don't see any characters from TFA in the Rogue One teaser, the film would be the perfect way to give us some backstory on some of the new trilogy's more mysterious characters — namely, the pirate smuggler Maz Kanata (Lupita Nyong'o). We learn in TFA that she has a long and unexplained connection to the Force and the rebels, given that she's somehow in possession of Luke Skywalker's lightsaber. A surprise cameo by Maz in Rogue One could go a long way toward explaining her history.

How many of these possible Force Awakens connections will actually come to pass? Will we ultimately be shocked by some even more unexpected links between the two films? Or will Rogue One stand on its own, without any direct links to the new trilogy? We'll find out when Rogue One: A Star Wars Story hits theaters on Dec. 16.