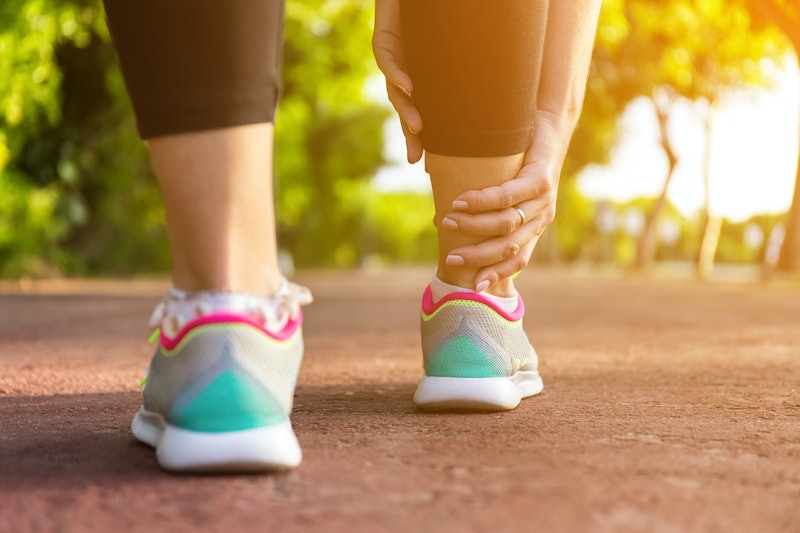 No matter what time of month it is, feeling swollen can throw you off. Even if you know your period is around the corner, you can still wonder why you're suddenly the owner of a puffy ankle or a bloated abdomen. When you get swollen, though, there's usually a good reason for it. Although there's a very small chance it's due to something serious, like kidney disease, dealing with swollen body parts is usually not that big of a deal. Even so, it's good to find out what the problem is, because it may give you the kick in the butt you need to finally tweak those small daily habits that are actually disagreeing with your body.

Unfortunately, women deal with swelling and bloating more often than men. Robynne Chutkan, M.D., gastroenterologist and founder of Digestive Center for Women, told the Atlantic that women's colons are 10 centimeters longer than men's, which they think has something to do with being able to absorb more fluid during the whole childbearing thing. Additionally, our colon drops down lower in the abdomen, where it fights for space with our ovaries, uterus, fallopian tubes, and bladder. We also of course deal with more hormonal changes. Put all that together and you've got a recipe for a lot of swelling up.

But as long as you stay tuned to the signals your insides are sending you, you'll be well prepared to nip that ballooning in the bud. Here are 14 reasons your body feels swollen.

Let's get the obvious one out of the way first here: One of your many superpowers is that, during the week leading up to your period, many things enlarge in size. For one, your breasts get tender and swollen because your ovaries emit the hormone progesterone into your milk ducts. But progesterone's work isn't done yet — it also teams up with estrogen, which is also fluctuating during this week, and together, they cause major fluid retention. As a result, your stomach bloats, it's hard to the touch, and you can barely get those jeans on.

Follow the basic rules if you want to keep the swelling to a minimum: sleep a lot, hydrate, and steer clear of salty and sugary foods.

2. You're Either Drinking Too Little Or Too Much Water

More likely, it's too little. When you're dehydrated, your blood vessels enlarge, leading to a swollen stomach, face, and even hands and ankles. To avoid waking up as a human balloon, drink a tall glass of water at night before you hop into bed, and kick off your day with some water (preferably with lemon).

On the flip side, your tummy might be bulging because you've been chugging too much H2O. If you drink a quart or more of water in one sitting, you could end up with some serious bloating and discomfort in your stomach. This is much more likely to happen if you're tossing back a lot of water with other liquids or food already in your belly.

3. You've Been Eating Way Too Much Salt

I'm so guilty of this. I've had to make a conscious decision recently to cut down on my use of the salt shaker, but it paid off, because now I wake up with puffy cheeks far less often. If you've just come off a salty food bender, don't be surprised if your feet, ankles, and even your lips are swollen. It's a condition called edema, and it's from all the fluid retention. You're not in any danger, but it's a sign that you should lay low on the salt for a little while and drink lots of water.

Of course, if you wake up on the regular with this kind of swelling, you might have to think about a general overhaul of your diet. Keep it to 1500 mg of sodium a day, which equals about 0.75 teaspoons of salt. Also, be careful about eating out all the time: The American Heart Association says 75 percent of the sodium Americans consume actually comes from restaurant foods and other processed foods. Time to start experimenting in the kitchen.

If your belly is swollen and hard to the touch, and you know your period isn't around the corner, ask yourself when you pooped last. Officially, if you're having less than three bowel movements a week, your stool is hard, and you're harboring some abdominal pain, you're constipated. Another surefire sign is that your belly is protruding more than normal. You're just backed up, my friend, so drink more water and get some fiber into your system.

5. You Have A Lactose Intolerance

All it takes is half an hour for your belly to swell up after you've drank a glass of milk. Because our bodies produce less and less lactase as we get older, the enzyme we need to break down cow's milk, it becomes harder to digest dairy as an adult.

Lactose intolerance is much more common than you might think, especially among people of color. At least 98 percent of Southeast Asians, 90 percent of Asian-Americans, 74 percent of Native-Americans, 70 percent of African-Americans, and the majority of Jewish, Latino, and Indian people have it. So if you fall into any of those categories, see if nixing dairy from your diet doesn't zap away the swelling.

6. You're Sensitive To Gluten

If you're not equipped to properly process gluten, it causes an autoimmune response in your intestine walls, which causes swelling, abdominal pain, and gas. This is officially called villous atrophy, and it prevents you from digesting gluten. You don't have to be allergic to gluten or possess a disease like Celiac's in order to get bloated from foods like bread and pasta. It could just be that your system is extra sensitive to gluten, so you should either cut down on your consumption of it or throw it out of your diet altogether.

7. You're Consuming Too Much Artificial Sugar

Here's my hot take on artificial sweeteners: they're evil. The reason they don't have any calories is because they were specifically designed to bypass absorption in your small intestine and instead go straight to your colon, where they ferment with the gut bacteria — leaving you with gas and a bloated tummy. Break up with artificial sugar for a while and see if your swollen stomach doesn't start to subside.

8. You Eat Your Meals Too Quickly

I used to think my mom was lying when she said it takes a full 15 minutes for my brain to get the signal from my stomach that I'm full. Well, in a way, she was — it actually takes 20 minutes. If you're the kind of person who speeds through meals on the regular (join the club), you might be dealing with a swollen abdomen from time to time, due both to overeating and intaking more air as you chomp down. Take your full lunch hour to chew slowly and actually enjoy that sandwich of yours.

9. You Had Too Much To Drink Last Night

Going hard on booze can also be a culprit for various swollen body parts. Drinking a lot of alcohol, especially the heavier options such as beer, is very similar to eating a large, rich meal. This makes you and your stomach feel super full. Excess amounts of alcohol also tears up the lining of your stomach, which leads to inflammation, then bloating. All you can do now is hydrate, rest up, and stay away from extra sodium.

10. You Haven't Been Moving Around Enough

The less you move your body around, the less action your digestive system gets. As a result, things might get jammed up, and suddenly you're a more bloated, gassier version of yourself. Maybe you've been sitting at your desk for too long at a time without getting up and moving every now and again. If you're not using a standing desk (which you should seriously consider!), make sure you're on your feet at least once every hour for 10 minutes.

And let's not forget exercise. Getting your heart rate up can help flush out the toxins in your body that have been stagnant for a while. Yoga is a good place to start, as it's known to deflate many different swollen parts of your body, including your feet, legs, and abdomen.

11. You've Eaten Too Much Fiber

Although fiber is a nutrient that 97 percent of Americans aren't getting enough of, there are times when you accidentally consume too much of it. Raw foods have their benefits, but eating too much in one sitting will make you bloated, because your intestinal flora have trouble handling all that fiber at once.

Drinking a sufficient amount of water along with your fiber intake is crucial in order for the fiber to do its job properly. Soluble fiber absorbs water and insoluble fiber traps it. Both actions ensure you feel full, prevent your blood sugar from spiking, and add moisture to waste so you can poop easily. If it doesn't get its fix of water, though, all that fiber turns hard as a rock. Your stomach will get swollen, but it doesn't necessarily stop there. Ankles, calves, and hands bloat too.

Fluid builds up in your body when you're tens of thousands of feet in the air and completely inactive in your seat. Blood doesn't move as easily to your joints and limbs, so swollen ankles and feet are very common when you fly. It's nothing serious, but you should move around as often as you can, avoid alcohol, and stretch out your body. You want to avoid the possibility of developing a blood clot in your legs.

13. You Have A Minor Injury

The body's first response to pretty much any injury is inflammation. Fluid naturally accumulates around the irritated area. It's either edema, which is swelling in the tissue outside of your joint capsule, or effusion, which is swelling inside the joint capsule. Either way, minor stumbles and falls could result in a swollen ankle, knee, foot, wrist, etc. Rest it for a while, put some ice on it, and elevate it.

If these injuries happen when you're in a hurry, like you fell while walking down the street, your adrenaline might have been running so high that you didn't even realize what kind of injury you were dealing with. If swelling occurs within the first two hours, go see a doctor. It might be hemarthrosis, which is when blood actually gets into the joint capsule.

14. You Have A Condition Or Disease You Don't Know About

If being swollen everywhere is a common recurrence, there might be something more serious happening that you're not aware of. For example, over 90 percent of people who have kidney disease don't even know it, yet there are some visible signs that point to its existence. Decreased kidney function results in fluid retention, leading to swollen ankles and feet, and constantly puffy eyes. Also, a swollen lower body could mean your blood isn't being pumped properly, which points to heart disease. Finally, if you always have a swollen belly, particularly after meals, there's a possibility you're living with Irritable Bowel Syndrome (IBS).

No matter what your symptoms are, if they're persistent, call your doctor and pay them a visit immediately. Because as annoying as a swollen body may be, it doesn't even compare to the consequences of unknowingly living with a disease that could compromise the quality of your life.

More like this
So You're Having A Medication Abortion
By Dana Smith
How To Fight For Reproductive Rights, Based On How Much Time You Have
By Courtney Young
6 Abortion Advocates To Follow On TikTok
By Sara Youngblood Gregory
How To Protect Your Digital Privacy If You Need An Abortion Post-Roe
By Kaitlyn Wylde
Get Even More From Bustle — Sign Up For The Newsletter