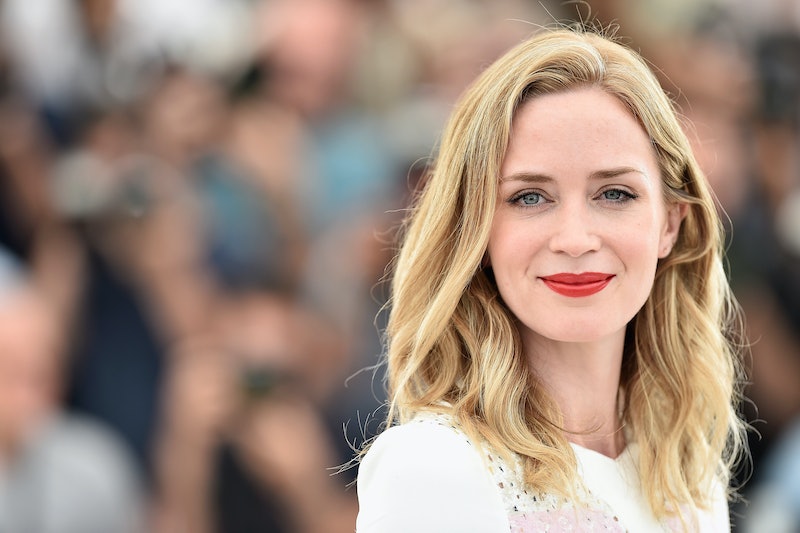 It's hard to imagine the woman who wowed audiences in 2015's Sicario originally had no intentions of becoming an actor. That's right, British actor Emily Blunt never planned on becoming a Hollywood film star, and it's hard to imagine why. After all, the 33-year-old has appeared in some of the bigger films of the past few years — Edge of Tomorrow and Into the Woods being two. And her trajectory is only ramping up: She's set to appear in Girl on a Train (based on the New York Times bestseller), and a Mary Poppins adaptation ("Maybe. Maybe..." she quickly clarifies). Regardless, the actor has had an incredible past few years, so why weren't her sights always set on the Hollywood hills?

"I didn't envision any of this," Blunt says of her career. "I wasn't intending to be an actress. I did a school play and an agent came to see me, and within a year I'm on stage with Judy Dench."

While she may have been a young woman who wasn't trying to make it in the industry, this seems like every struggling actor's dream: being plucked off the stage of a school play and being dropped next to an A lister. If there was ever a Hollywood dream come true, Blunt's circumstance is surely the poster child.

"It was so extraordinary. She was so kind for me. I knew nothing. I was so green. I hadn't trained. I was 18," the mother of one (with another on the way) says. "She paved the way for me to approach this industry. To walk into every room with great hope, because you never know where it's going to take you."

Dench's advice is something Blunt has taken with her into casting rooms over the past 15 years. But Hollywood itself has offered lessons of its own. "I entered the industry with pretty casual expectation of what would happen. I've learned to embrace the unknown and trust my instincts," the London native says. "There've been movies I've chosen to do where no one else around me thinks I should do them, but I'm drawn to the part for whatever reason. I've always tried to make choices based on what I'm inspired by, not a strategic move that I think will take me somewhere else in the industry or whatever."

Considering Blunt's last film Sicario was nominated for three Academy Awards, her role-choosing tactics seem to be working just fine. "You're breathing very rarified air if you're able to work within this industry. I love it, but I entered the industry not knowing what on earth I was walking into. You're just so fortunate to be able to make choices and choose to play people."

The latest role Blunt has chosen to play is an icy queen in The Huntsman: Winter's War opposite Charlize Theron, Jessica Chastain, and Chris Hemsworth. "I definitely wanted to do a queen off with Charlize Theron," she says. "And I don't think I'd ever played a villain in a heightened reality, and I thought it would be a delicious thing to play."

Blunt may never have intended to take Hollywood by storm, but she's done just that, and as an avid fan of her work (and her consistently wonderful portrayal of female characters on screen), I have to take a moment and publicly thank the drama teacher that cast Blunt in a school play all those years ago. Bravo!