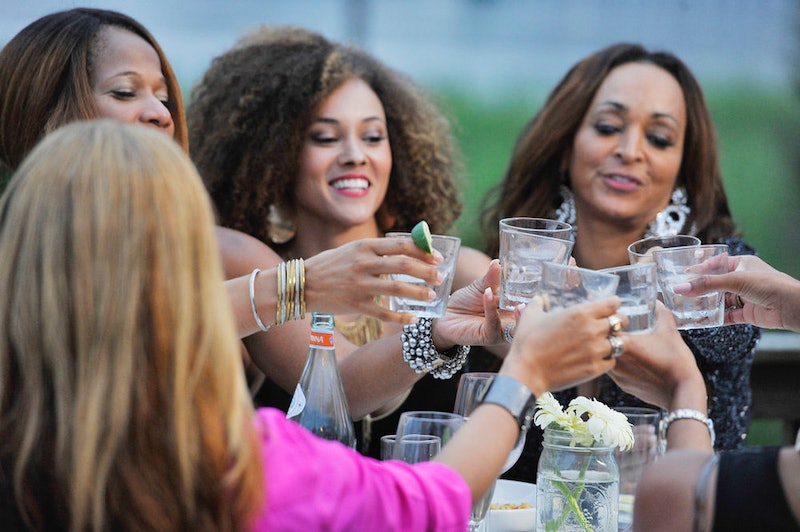 The season finale and first reunion special of The Real Housewives of Potomac left almost every single cast member fuming over the actions of another. But Karen Huger and Ashley Darby tell Bustle in an interview that their emotional, explosive arguments over Ashley's relationship with Karen's daughter Rayvin are a thing of the past. That's right: Karen and Ashley are friends again after RHOP Season 1. While the comments they exchanged during the season and the reunion were incredibly intense, both women say that they've decided to move on from fighting and onto something a lot better: a brand new, totally unexpected friendship.

Karen thinks that her passionate reaction to their argument was prompted by protectiveness over her daughter, who was preparing to head off to college. "I was in Mama Bear mode, I was protective, I was emotional," she says. But it's been almost a full year since then, and Karen seems more ready for fun now than she was during the first season of Real Housewives of Potomac. "Since then, I’ve developed this really, really fun approach to life, and I want to share that ... Being Karen is not too bad right now!"

After the season was over, all of the Housewives took some time off to let their emotions cool down. "I think if anything, I’ve learned that to respect people’s boundaries," Ashley says. "Even though we’ve had our share of ups and downs, I feel like I’ve come out stronger from this whole thing." If you need to catch up on those "ups and downs" and the entire Ashley vs. Karen saga, all of Real Housewives of Potomac Season 1 will be available to watch for free on Xfinity during Watchathon Week, which begins on April 18.

Having learned from their experiences last season, Karen and Ashley now have a lot of newfound respect and admiration for one another. Karen has a very different, extremely kind answer to the question of whether or not Ashely belongs in this cast now than she did when she implied the younger woman had no place in Potomac earlier in the season.

"I grew to respect this young, dynamic woman; she brought a new approach to how I look at things. And, I think what happened was we decided to respect one another. Respect one another’s boundaries and one another’s differences. And I think that was really important for my character and Ashley’s as well ... when friendship is the basis of the relationship."

And even though Karen still loves the rules of etiquette, she now has a lot more appreciation for Ashley's fun, freewheeling attitude. "I absolutely got that Ashley is a fun fireball," Karen says. "And I love her energy, so I’m looking forward to our relationship developing even further." Ashley completely agrees, joking, "I think Karen’s a very dynamic woman. She has a big personality, and you have to get used to it because if you try to ignore it, it doesn’t work out."

Both women call the relationship they've formed a true friendship. And though you may sometimes root for Real Housewives to stop getting along so they can bring that entertaining reality show drama, I think Ashley and Karen's newfound friendship will only make Real Housewives of Potomac better.