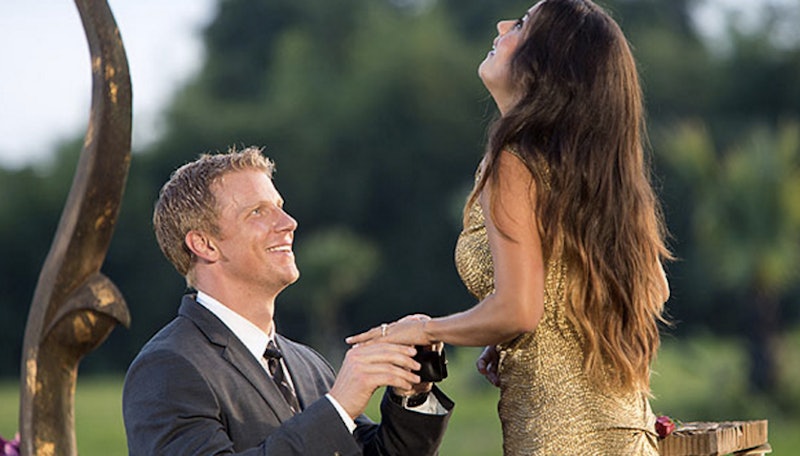 As much as I love reality TV, it has one major drawback: Not all shows are as re-watchable as more traditional comedies and dramas. When I love a show, I watch it over and over again, and it would be hard to say how many times I've watched Gilmore Girls or Friends on a loop. But when it comes to competition-based shows like American Idol and America's Next Top Model, I have no interest in watching it all over again after I know the final outcome. But this is where The Bachelor is definitely an exception. Don't get me wrong; there are certainly seasons that we'd probably be better off for forgetting permanently (hi, Lorenzo Borghese's boring season), but plenty of them have a shelf life that lives on long past After The Final Rose. And the next time you're in dire need of a marathoning session, there are certain Bachelor seasons you should watch again, even though nothing is as good as brand new episodes.

Even if you're like me and cling onto every detail if it'll help you figure out who the Bachelor picks in the end, so much goes on in each episode that no matter how many times you watch, you'll still pick up on things you missed before. And even if you're looking for something to get you through the long, cold months where The Bachelor and The Bachelorette aren't airing, these should do the trick.

Nothing about Alex Michel's season was particularly memorable, but it was the first one, so for that reason alone it's worth a re-watch. So many things have changed between Season 1 and Season 20, and re-watching Michel in action is an insane throwback. And if for no other reason, you should totally watch for Chris Harrison's hair. I don't want to spoil it for you. Just watch.

It was good the first time around, but I suspect it would be even better knowing the end result — that Mesnick chooses Melissa Rycroft only to change his mind and pick Molly Malaney later. And of course, you have to watch After The Final Rose, too, if you want to get the full effect. And trust me, you do.

I can't put my finger on it, but there was something truly entertaining about Lowe's season. Maybe it was the fact that Tierra LiCausi was so ridiculous that there was never a dull moment? Or maybe it's because I was (and still am) obsessed with Lowe's now wife, Catherine Giudici. Either way, this one definitely holds up to the test of time.

This one is obviously the most recent, but if you want to get super geared up for The Bachelorette this summer, a re-watch might be in order before seeing JoJo Fletcher take the wheel. Plus, it will also remind you why Lace Morris is going to be so much fun to watch on Bachelor in Paradise , too, so really you're killing two birds with one stone. Who said reality TV watching wasn't productive?

This one is mostly because Jake Pavelka was always too cute, but his season was seriously entertaining, too. Between him picking the season's villain, Vienna Girardi, to the Rozlyn Papa scandal, there are so many reasons to give this one another watch. Plus, who could ever get tired of the national treasure that is Ali Fedotowsky?

Show me a person who doesn't love a good hate watch, and I'll show you a liar. Yes, Galavis is infuriating, but that's part of the fun. And there's something so satisfying about when Andi Dorfman finally got in the last word and walked off the show, only to become the Bachelorette a few months later. Oh, and there's also knowing that even though JP chooses Nikki Ferrell, these days she's engaged to someone else who actually treats her well. Victory!

Next chance you get, settle in with The Bachelor and your junk food of choice. There's plenty to watch until The Bachelorette is back in May! And you thought you didn't have plans this weekend...

For more Bachelor, check out Bustle's podcast below: