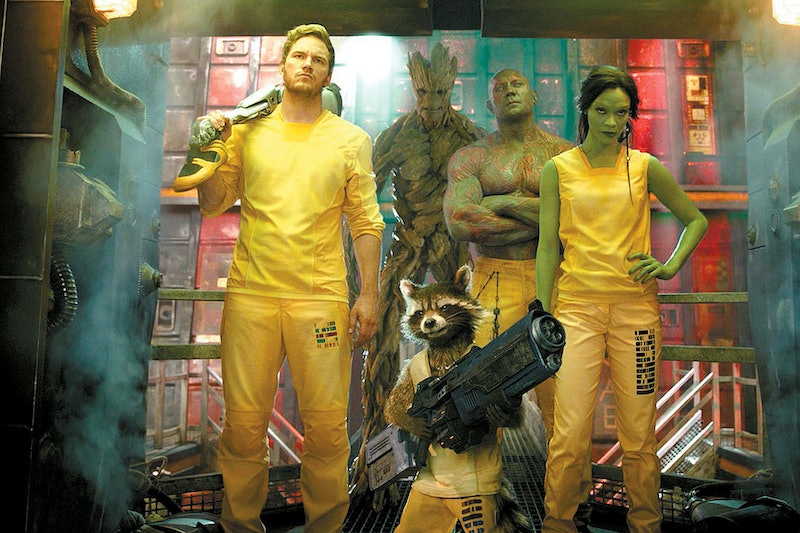 Captain America: Civil War may not even come out for another three weeks, but anticipation surrounding Phase 3 of the Marvel Cinematic Universe is already so five minutes ago. With the recent confirmation that Guardians Of The Galaxy Vol. 3 is happening, Phase 4 anticipation is officially "in." The first universally stellar reviews are still rolling in for the film that will kick off the third chapter of the MCU; over the next four years, 10 more movies will follow Civil War, culminating in 2019's Avengers: Infinity War — Part 2. But what comes after that? What will Phase 4 of the MCU be about?

That's a great question. Screenwriters Christopher Markus and Stephen McFeely — who scripted all three Captain America films — and directors Anthony & Joe Russo — who helmed both The Winter Soldier and Civil War — all four of whom will be returning to write and direct both parts of Infinity War, recently gave an interview to io9 along with Marvel Studios president Kevin Feige, in which they collectively referred to the third Avengers movie as the "culmination" of the Marvel Cinematic Universe. And it's certainly true in a sense, since the first three Phases have all been building up towards the Avengers' impending war with Thanos over control of the Infinity Stones.

So what comes after a "culmination"? Clearly a reset of some sort, right? Well, if you're worried about the whole franchise being rebooted and all of your favorite characters recast, don't be. While Feige acknowledged to io9 that "We’re only working on what’s been announced through the end of 2019," he also assured that "it is still a big chess board for 2020 and beyond. […] Certainly I would say Guardians 3 is [one film that’s] up there. I don’t know what exactly the order will be.”

Of course, Marvel didn't stop printing comics after they ran their six-issue "Infinity War" series in 1992. They didn't even have to reboot the storyline of every character involved back to the beginning; they just kept telling more stories. So what stories might the MCU tackle next? This question has been the subject of much debate among fans of the franchise, who love speculating on what event Phase 4 will lead up to and who the new overarching villain of the franchise will be.

It's a safe bet that the culmination of the next stage of Marvel's plan will be pulled from another one of their epic "crossover" events, those multiple issue-spanning tie-ins where characters from various series all join together to fight a common enemy (or each other, in the case of "Civil War"). Some popular crossovers that have been the object of much theorizing among the MCU's fanbase include "Avengers Disassembled," in which Scarlet Witch's mind-control powers slowly and inadvertently cause the team to collapse; "Fear Itself," featuring a villain named The Serpent who possess seven superheroes into becoming his evil henchmen; and, most prevalently, "Secret Invasion," which sees many Earth's mightiest heroes replaced by alien imposters.

Regardless of which of these events — if any — the Marvel Studios chooses to adapt next, there's no doubt that Phase 4 will look very different from what MCU fans have come to know and love. The contracts of the franchise's original stars will start to expire and surely actors won't want to keep doing this forever. It's probably unlikely that we'll see more solo movies from the likes of Iron Man, Captain America, and Thor, whereas it's highly likely we'll start seeing even more from new heroes like Spider-Man, Black Panther, and Doctor Strange.

There's also a question of whether the phases will continue to build upon one another, or whether, post-Infinity War, each phase will "culminate" and then reset on its own. The phases are getting longer (11 films in Phase 3 compared to only six in Phase 1), and it will only get harder and harder to sustain long-form storytelling across multiple phases if that kind of exponential growth continues. Or maybe the superhero bubble will finally burst upon Infinity War's release, as doomsayers have been predicting for years, and all of Marvel's plans will collapse in on themselves.

Either way, it's hard to imagine that audiences will leave theaters after Infinity War — Part 2 without some idea of what's coming next; Marvel hasn't built a reputation on its post-credits scenes for nothing. Will that movie end with the revelation that one of our heroes has been surreptitiously replaced by a Skrull? We'll find out in 2019.