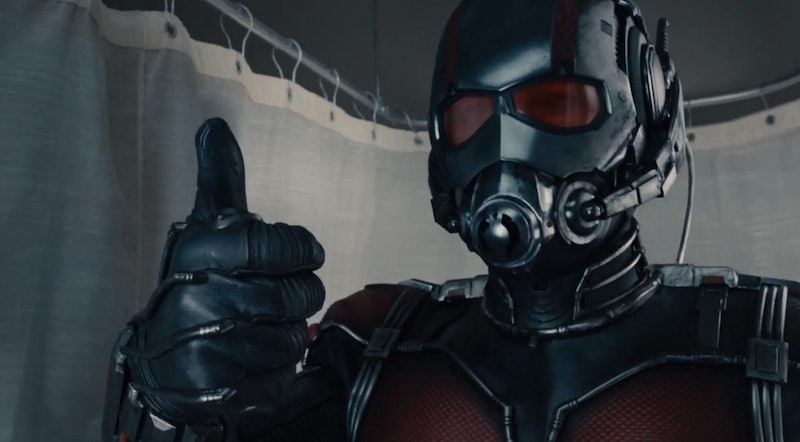 Marvel Studios blasting full steam ahead, and are adding to their already-packed slate. Starting with next May's Captain America: Civil War, Phase 3 of the Marvel Cinematic Universe was originally supposed to consist of nine films, culminating with Avengers: Infinity War — Part 2. That list was expanded to 10 when a Spider-Man movie was inserted for release in 2017; and now the studio is announcing the addition of four more movies — an Ant-Man sequel and three untitled projects — to the roster, ballooning Phase 3 to a whopping 14 entries. (Compare that to Phases 1 and 2, which both consisted of six films apiece.)

As exciting as Ant-Man And The Wasp sounds, with its expanded role for Evangeline Lilly's Hope Van Dyne (aka very exciting), it's those three mysterious "untitled" projects that caught my eye. Which Marvel heroes will be getting their own films in 2020? Since these post-Infinity War additions are technically still part of Phase 3, let's rule out the possibility of sequels to films already in the roster. (Those will presumably wait until Phase 4 begins in 2021.) Instead, these three movies will likely either be established heroes that don't have solo outings in Phase 3 yet, or brand new heroes introduced to the MCU for the first time.

Here are the nine most likely possibilities.

The most glaring omission from Marvel's Phase 3 is Robert Downey, Jr.'s ironclad billionaire playboy Tony Stark. Iron Man is Marvel's crown jewel — his was the film that kicked off the whole Cinematic Universe, he is one of the core trio of leading characters (alongside Captain America and Thor)... and yet he's the only one to not have a sequel in Phase 3. Is Marvel finally about to announce Iron Man 4?

Technically, the Hulk already has an MCU solo film, although the not-so-jolly green giant was played in 2008's The Incredible Hulk by Edward Norton, before he was replaced by Mark Ruffalo. Most fans agree that Ruffalo is the best big-screen Bruce Banner yet, and have been clamoring for a solo film since the actor's scene-stealing Marvel debut in 2012's The Avengers.

For years, Marvel has resisted giving Scarlett Johansson's super spy her own solo movie. Then, Marvel announced they were making a Captain Marvel movie with Carol Danvers as the titular hero; then Elizabeth Olsen's Scarlet Witch was the breakout character of this summer's Age Of Ultron; then Marvel announced that Wasp would be the full-fledged co-star of the Ant-Man sequel. Is the studio finally ready to embrace female superheroes in all their potential? There's a huge market out there for a Black Widow movie, and Marvel would be foolish to pass it up.

The MCU has been to the four corners of the Earth, a celestial fantasy kingdom, and the far-flung reaches of outer space. Now perhaps it's time to go under the sea? The Sub-Mariner, aka Namor, is Marvel's very first superhero, appearing in Marvel Comics #1 and pre-dating the other two of the publisher's early Top Three characters — Human Torch and Captain America — by several months. Now that Marvel has firmly established itself as a powerhouse movie studio that can make the most obscure titles into massive successes (Guardians Of The Galaxy), it's time to pay homage to the hero that started it all.

Or maybe Marvel will take the opposite tack and, instead of reaching far back into their history, they'll draw on source material from their more recent past. Most of the inspiration and storylines for the MCU have come from the Ultimate Universe, which launched in 2000 and ended this year with Secret Warriors. 2014's Guardians Of The Galaxy introduced moviegoers to the concept of Nova Corps, an intergalactic peacekeeping force based on Xandar. Nova is a member of this group who got his own series starting back in 1976. The recent Ultimate version of the character had a teenager named Sam Alexander behind the mask. Marvel is already reaching out to a younger audience with their new Spider-Man — could they continue that trend with Nova?

Similarly, if the studio wanted to pursue that younger audience but this time with a female character, they could adapt this brand new series about a young girl and her pet T-Rex. I already wrote at length about why Marvel should adapt Moon Girl in Phase 4 — but with Phase 3's expansion, why wait? In one fell swoop, they could diversify their roster of superheroes in terms of age, gender, and race... not to mention the introduction of FREAKIN' DINOSAURS to the MCU. What would be more awesome than that?

If Marvel passes on Moon Girl, they also have a lunar superhero of a totally different variety to consider. Often referred to as "Marvel's Batman," Moon Knight is a billionaire costumed vigilante who prowls the city at night exacting justice with an array of high-tech gadgets. He has a supernatural origin, having been resurrected by the Egyptian moon god Khonshu after being killed in a duel; as a result, Moon Knight's strength waxes and wanes with the cycles of the moon. But, other than that, he's just a regular guy in a cape — like Batman.

So far, all three Phases of the MCU have been steadily building towards the impending conflict with purple super-villain Thanos — the Infinity War. So what will be in store for the franchise after Infinity War — Part 2 debuts in May of 2019? That's a great question. Regardless of what conflict the MCU will build to next, what better way to kickstart the new generation of the franchise than with a literal new generation of superheroes? Age Of Ultron ended with Captain America and Black Widow ready to train a new group of heroes (Falcon, Scarlet Witch, Vision, War Machine) to join their ranks. Infinity War — Part 2 could end similarly, with whatever characters are left standing ready to train an even newer group — like this popular Marvel series that sees young heroes such as Spider-Girl, She-Hulk, Batwing, Thunderstrike, and more all training together under one roof.

One of the unending frustrations with the MCU is that Marvel itself doesn't actually have the rights to adapt the X-Men, their most popular group of heroes. But maybe the reason these three untitled additions to Phase 3 are so secret is because Marvel is still hammering out the fine print of a deal with Fox that will finally bring the mutants back into the fold. With the popular First Class trilogy about to wrap up next summer with X-Men: Apocalypse, Hugh Jackman announcing his retirement from the franchise's banner character Wolverine, and future film projects like Channing Tatum's Gambit on the rocks, a deal between Fox and Marvel has never seemed more possible.

No matter what, Marvel has already got the fans talking, and that's the most important thing.