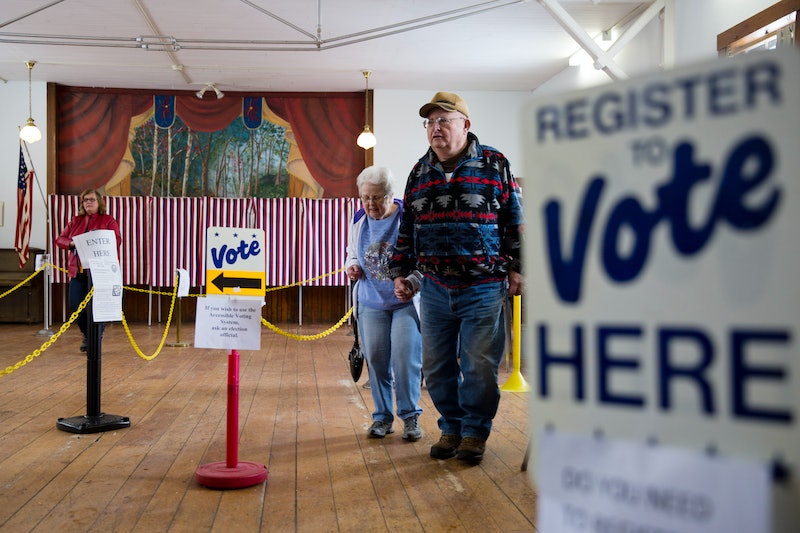 After the New York primary on April 19, candidates will have to pivot to Connecticut— and fast. The Constitution State will hold its primary on April 26. Both the Democrats and Republicans will hold closed primaries, meaning you have to be a registered member of the party to cast your vote. Unlike in New York, however, you can register in Connecticut almost up until the final moment — April 21 by mail, or April 25 in person, according to the Hartford Courant. But, is the Connecticut primary winner take all?

Connecticut will award 71 Democratic delegates (55 are pledged) and 28 Republican ones. The Democratic delegates will be awarded proportionally. Because everything with the GOP side apparently just has to be more complicated, the party's delegates will be divided by a "modified winner-take-all" system. Of those 28 delegates, 15 are divided among the state's five congressional districts. As Nate Silver at FiveThirtyEight wrote of Connecticut's Republican delegate divvying system, those 15 "statewide delegates are awarded proportionally, but (as in New York) they become winner-take-all for a candidate getting a majority of the statewide vote."

Winner take all above 50 percent, otherwise proportional with 20 percent threshold statewide and winner take all by congressional district.

This is also often referred to as a "hybrid" system of awarding delegates, and it's being employed in a whole bunch of states besides Connecticut, including the recent New York and upcoming Pennsylvania primaries on the GOP side.

The most recent polls show Sanders trailing Clinton in Connecticut, but not by a lot. Meanwhile, Trump leads by a large margin on the GOP side. The trusty folks over at FiveThirtyEight believe Trump could make a splash in the Constitution State. As Nate Silver wrote,"Connecticut awards three winner-take-all delegates by congressional district. Because its congressional districts are fairly homogeneous — especially relative to New York's diverse ones — they'll probably be swept by anyone who dominates the statewide vote, as Trump looks like he will." So, in addition to picking up the 25 statewide delegates, Trump will likely snag those three.

Of all the candidates in both parties, Trump could end up the biggest winner of all in Connecticut.